Things look promising. It's a mild overcast day with a gentle breeze and the club car park is empty, so I'll have the river to myself. I walk upstream on the right bank in my waders to the bottom of an old lock where the entry point is. Fronds of bright red alder roots line the water’s edge where I get in. The river is a small chalkstream, previously dredged and canalised to allow barges to bring coal to the town from the Wash. The barges are long gone, made obsolete by the advent of the steam train. The river has been restored here, and there are meanders, pools and riffles. A few miles upstream it flows through Tesco’s car park in a brutal concrete channel. Here though the trout has somehow hung on. No stockies here. 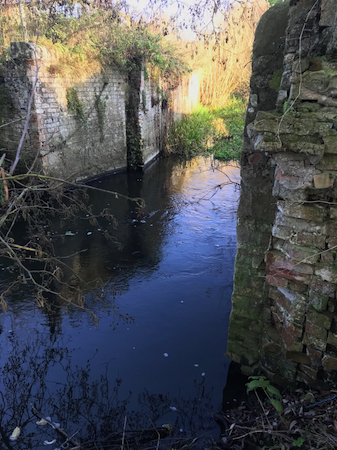 I have to be very careful here at the tail of the old lock as the redundant lock gates were simply tipped into the river where they remain, waiting to break an ankle or pitch an unlucky angler into the water. The gates are made of alder and don't rot when submerged, which is why they underpin much of Venice as pilings. Over hundreds of years the piles have been impregnated with minerals from the lagoon and essentially turned into stone.

I negotiate the lock gates without incident and move upstream. A few small sedges are coming off the water and a fish is rising near the right hand bank 30 feet ahead of me. I'm toting a new 8 foot 3 weight rod that cast well the day before on grass. One false cast and just gently drop the size 18 caddis a couple of feet in front of the trout’s last rise form. Except it doesn't. A predatory twig reaches out and seizes the tippet, causing the rod to arc backwards. Bugger!

I'd seen a cool video on YouTube on how to release flies in trees by pointing the rod at the fly and plucking at the line. That doesn't work - what a surprise. The fly is well out of reach and I just have to pull hoping to snap the twig. Fat chance. This is an alder, remember, and they're tough. Well hard.

Alders have been feared and worshipped since antiquity; their longstanding reputation and sanctity attributed to the white wood bleeding crimson fluid when cut, like a human. In parts of Ireland it was held to be a crime to fell an alder, as this would enrage the tree spirit who would burn houses in revenge. In northern Scandinavia the native Sami people made sacrifices to Leaibolmmai, the alder tree god. In Wales alders were associated with death, as commonly the branches were used to measure graves.

Away from the water alders are not all bad boys. Traditional Fender Stratocaster bodies, as used by Hendrix and Clapton, are made from alder. Pacific salmon are smoked over alder charcoal which in previous years was used as an ingredient of gunpowder. The tree was a source of dyes; a green dye was extracted from the flowers and allegedly used to colour Robin Hood’s tunic. Alder roots are bright red, the same colour as a dye that can be garnered from the outer bark. Tannins from the bark were used as an astringent and antiseptic for cuts and rashes by native American tribes who also used bark extract as an analgesic, as it contains a compound metabolised into aspirin in the body. It was also used in one version of their wacky baccy known as kinnikinnick.

Alders are used to improve poor soils or brownfield sites due to their bartering relationship with a bacterium that forms large nodules on the tree roots; these trap nitrogen from the air and greatly improve soil fertility; in exchange the roots supply sugars derived from photosynthesis.

I have to pull for a break. Fortunately it looks as though only the fly and a couple of inches of the nylon tippet are left behind and will not pose a threat to birds. Only a couple of small chub come to my fly over the next couple of hours as I move slowly upstream, and no sedges are coming off now so I decide to Klink and Dink with a gammarus nymph imitation on point. I'm facing the head of a pool below a shallow riffle where the water is 3 or 4 feet deep. I'm not a great caster but a sideways cast manages to miss the menace of the alder branches hanging over the river from the right hand bank. Second cast the large bushy dry dips and I set the hook into a solid fish. Except it's not a fish. Just a solid. I wade up as close as I can and point the rod at the snag and pull on the fly line. Slowly the obstacle moves down towards me. Breaking the surface now is an old black tree branch festooned with silkweed and other artefacts. A corroded Mepps - tut tut! What looks like a shredded vest. And is that what I think it is? Aargh it is. A condom hanging limply. Discarded by an unknown member as it were. Where are my flies? I can see the big dry near the single-use item. I sit down uncomfortably on the sloping bankside to attempt salvage. No way Jose. My tippet and dropper are tangled in a Gordian knot with alder cones. 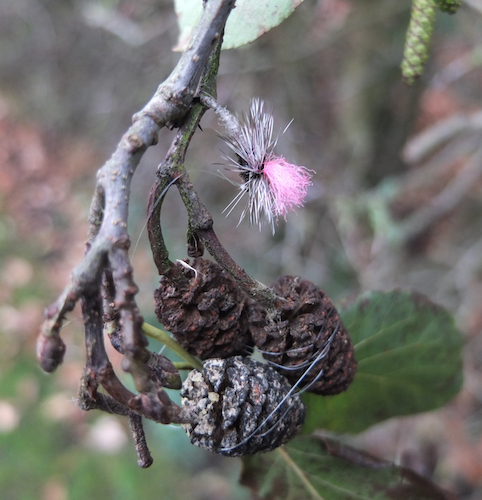 They hunt in clusters above and below water. It is an uncommon angler who can separate his or her line from their woody embrace, and even if they do the curled residue is beyond further use.

Exposed alder roots give shelter to fish especially during times of spate, and shelter from predators. It has a special affinity for salmo trutta and the distribution of the various alder species closely matches that of trout in the Northern hemisphere in Europe, Asia, and North America. Where trout have been introduced in the Southern hemisphere alders have faithfully followed - Argentina, Chile, South Africa and New Zealand.

Time to head back to the car along the rough path between the river and the large gravel pit run by a carp syndicate. I nod to some birders sporting expensive binoculars along the way, who give me a look that others might reserve for a flasher in a playground. The carp swims are grubbed out between a mixture of pollarded crack willow and alder carr. I pass a bivvy with three black rods on alarmed pods, and hanging from the right hand tree is a clear polythene bag containing beer and soup tins. All tidily bagged up ready to bin. Good. At the second bivvy I come to things are kicking off. A big bald man in a khaki vest and tracksuit bottoms is waiting with a wheelbarrow sized net to land his shorter companion’s fish, the long rod seriously hooped over. No words are spoken. It's a big fish, really big, like a bronze dustbin lid as it splashily enters the net. I have to see it and head down the slight scrubby incline between the alders at the tail of their swim.

Oof!, I trip over a proud tree root and end up face down  in the ground cover. I'm not hurt and my rod is intact. I get up, embarrassed, with an unpleasant taste in my mouth. The big man is on his knees with the carp on an unhooking mat. He looks up at me - “You OK mate? You look like shit.” Exactly so - I'm covered in it. Crap from the pugnacious scores of Canada geese who live here much of the year.

Another triumph for the alders. Perhaps next time the lock gates will get me.