It is easier than ever to share a day on the river but what about filming a memorable fish, piece of water or scenary. Is it easy to do? Nick Thomas has been filming some of his trips and shares what he has learnt

A camera has always been part of my fishing gear. Taking pictures as memories and to illustrate my writing is part of every fishing trip. Recently I’ve started to record some video as well as still images. Nowadays most digital cameras and mobile phones will record decent video, so you don’t necessarily have to buy a new camera to give it a go. I use the waterproof Nikon compact that I've been using for several years to take most of the images for my ESF articles. It records HD video (ESF #21) and I don't have to worry about getting it wet. In fact, it takes some pretty good underwater footage. 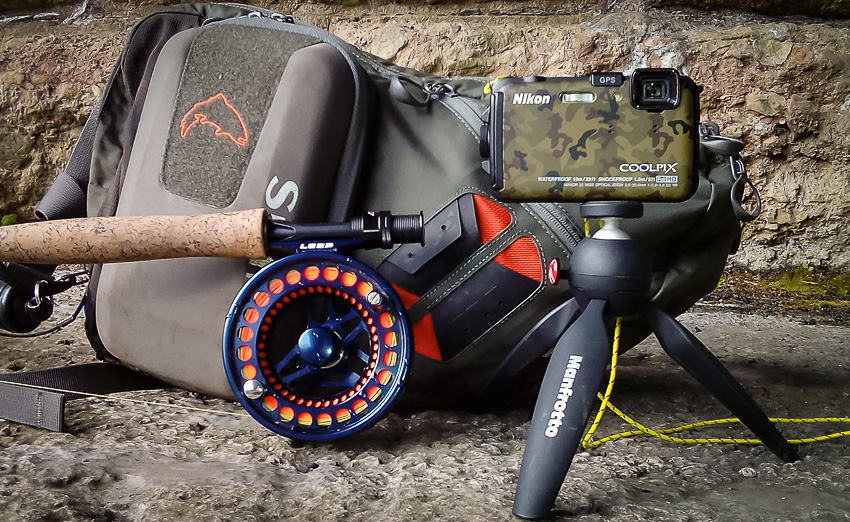 After a suitable camera, a tripod is an essential bit of kit for getting good video footage, particularly if you are fishing and filming solo and acting as director, cameraman and lead angler. Sometimes you may find a place to balance the camera on a rock or tree branch, but a tripod allows you far more choice for framing a shot. It will give you much steadier footage and helps to prevent the sloping river syndrome that's common in many fishing videos. A river sloping slightly downstream is forgivable in some cases, but not one that’s flowing uphill. I use a Manfrotto Pixi which fits in my sling pack and has a ball-head that is quickly adjusted by squeezing a spring-loaded button on the side. As well as allowing me to position the camera on the bank or on a rock midstream, the tripod allows me to attach the camera to myself for fishing and casting shots by shoving two legs of the tripod inside the front of my chest waders. When folded up the legs of the Pixi are designed to act as a handle under the camera, which makes for much steadier hand-held video. 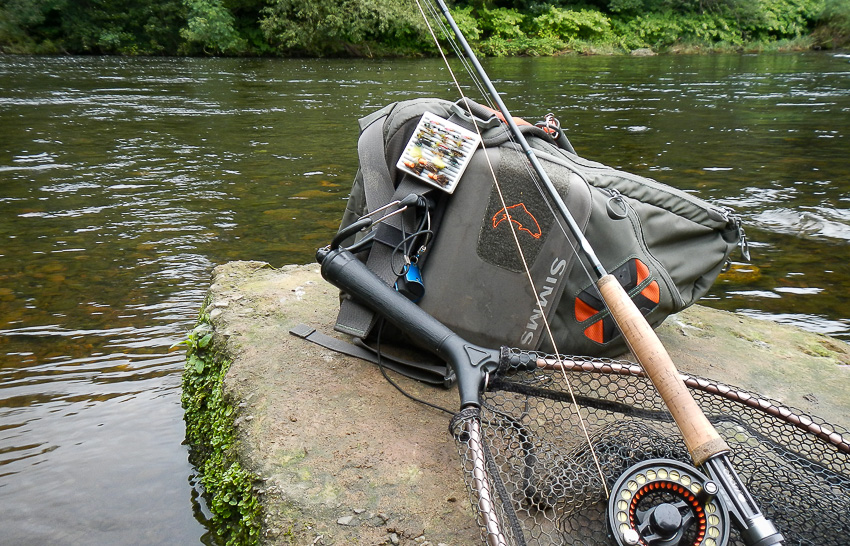 One thing I learned early in starting to record video when fishing alone is to be organised and have everything to hand, ready to go and well secured. When I’m fishing, my camera is clipped to a shoulder strap of my waders by a loop of nylon paracord so it won't get washed away if I drop it. The magnetic clip and elastic cord leash for my landing net are attached to a Petzl Caritool plastic carabiner on the strap of my sling pack, with the net handle positioned by my left hand when I’m wading. Another useful piece of kit is a rod clip; standing in a fast current trying to video with your rod tucked under one arm, one hand holding the camera and the other holding a fish while the rod waves in and out of the shot, or you worry about dropping it is not a harmonious experience. I use a Smith Creek rod holder, which is held on a stainless-steel wire cable ring on the same carabiner as the net clip. When I net a fish that I want to photograph or video, I can hold the net handle between my legs, clip the rod and then retrieve the tethered camera from the chest pocket on my waders and I'm good to go. The final useful bit of equipment is a microfiber cloth to dry off the camera after underwater shots. This prevents water droplets on the lens degrading the next shot.

Working with video requires a different discipline from still photography. Capturing a good still image is all about the moment. A good subject, good light and good composition are the key elements. Set the camera correctly, press the shutter and you have your image. With video, you are not capturing a moment, you are telling a story. That needs some planning. When I first started taking video I ended up with a series of clips that were essentially a collection of moving still images. I could edit them together, but the result was more like a moving slideshow than a proper video. Rather than thinking about the type of still images I wanted to illustrate an article, I started to think about the content of video sequences I would need to tell a story with a beginning, middle and end. I kept those in mind while I was out fishing and when there was a suitable location I would set up the camera. Once I got the hang of thinking this way I found that videoing didn’t take that much time away from fishing. I pretty much just carried on doing what I’d normally do, but with the camera running.

Once you’ve collected some decent footage you’ll need some software to edit it. I use iMovie as I work on a Mac these days. If you use a PC, it may have some sort of video editing package installed, if not there is plenty of free software available to download if you want to give it a try. 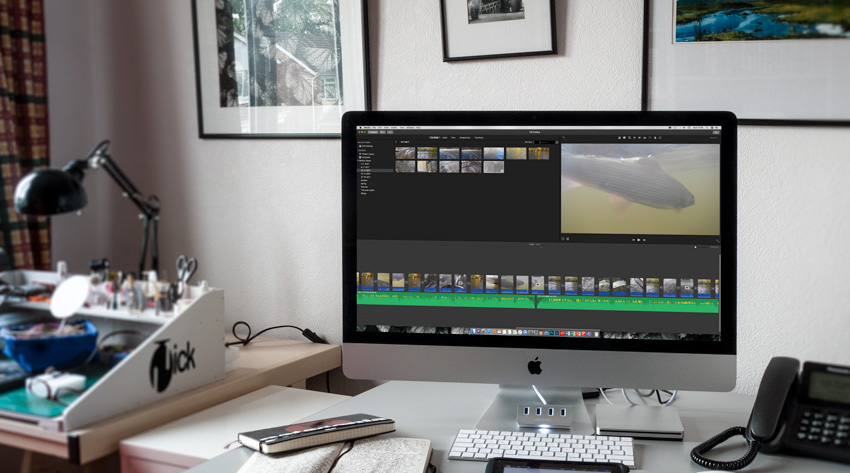 All video editing software works using the same basic principle. Video clips are dragged onto a timeline in the order that you want to them to play and then are trimmed or cut to make the finished movie. Clips can either be trimmed by dragging either end to select the desired sequence or the footage can be cut one or more times at the play head position to create separate clips. The latter method is used to cut good footage out of a longer sequence and delete the bits you don’t want, for example to cut out the sections at the beginning and end of sequence where you are turning the camera on and off. Or when you’ve got your fly line wrapped round your net, or your fly is hiding up a tree. It’s also used to shorten a long sequence by cutting out a number of intermediate sections, or to split the sequence to insert other clips.

Most editing software comes with a variety of transitions which you can apply between clips in the final sequence. Use these with care; overuse of different transitions becomes tedious for the viewer. You really don’t have to use them all just because they are available. The majority of your transitions should be either a straight cut or a cross fade. The latter is useful when you are shortening long sequences to give a sense of time passing, or to cut between sequences with a different pace or mood. Fades to black or white, or a blur fade may also be useful now and then, but don’t overdo it. You can also insert still images into video and most editing packages will allow you to zoom in or out or pan the image while it’s on screen so that you can integrate it with the video clips. Most software will allow you to overlay a title over the opening scene; again, keep it simple and don’t go overboard with fancy effects. You are not remaking Star Wars.

If you want to add some music to your video, there are lots of sources available on the web which provide tracks free for non-commercial use. Credit their use in your video. I use the Free Music Archive (http://freemusicarchive.org). Don’t use copyrighted music; if you try and upload your video to YouTube or another social media site it will be blocked.

The changing seasons are one of the things I love about fishing on the river. The varying light and colours, the different smells in the air and the changing character of the river make every day new and a joy to experience. Some people ask me if I ever get bored fishing the same river. My answer is that I’m never fishing the same river. I made a plan to record my fishing on the Taff through each of the four seasons to try and capture the essence of being out there in the wild, while still being within the confines of an urban environment.

The video below is the first of the quartet covering the four seasons. It was shot over three short grayling fishing sessions in one week in early November when I had good weather and light combined with the autumn colours at their peak. It runs for 6 minutes, edited down from around 60 minutes of raw footage. A lot of that video was long sequences of 5 to 10 minutes with the camera fixed on the tripod while I fished up through a pool. These action sequences were then chopped up and mixed with other shots taken at different times to make the final sequence. On one of the days I located a pod of grayling on the edge of a gravel run and after taking a couple of fish in quick succession, I waded back to the bank and set up the tripod on a rock. The fish were still there when I went back out and I was lucky enough to hook and net a few fish on camera in a 10-minute sequence which was edited into separate clips in the final cut. I hope you enjoy it.