I was in the USA last year, in Massachusetts to be precise, in order to attend a conference. It seemed rude not to take advantage of the situation and so a couple of fly rods were stowed away in my bag amongst the suit, ties and other conference paraphernalia. Any angler who has ever fished Massachusetts will probably tell you that it is most renowned for its saltwater fishing, with the state’s coast playing host to species like striped bass, false albacore and bluefin tuna.

The problem for the travelling angler with not much time is that saltwater fishing is hugely location specific. You really need to know where to go, how the tides, weather and presence of baitfish affect your chosen quarry and how to fish if you are in with a chance of catching. In contrast, targeting trout tends to be a little easier. In my experience, trout in different locations tend to behave in the same way. Hatches may differ, but where trout sit in a river and how they behave is broadly similar in rivers across the world. This incidentally, is one of the reasons I love trout fishing.

So I went in search of trout, rather than prospect the coast in search of fish that might not even have been there. Before you ask, I did consider a guide, but with a rapidly devaluing pound and being a lone fisher, the thought of forking out what would have been well over a thousand pounds for a couple of days' fishing made my eyes water a bit.

Once I started digging around for information, I realised that freshwater fishing opportunities in Massachusetts are hugely variable, with everything from trout and black bass, to salmon and walleye. Following recommendations to fish in the large Wachusett Reservoir, I spent a highly enjoyable day walking the bank and casting at largemouth and smallmouth bass and managed both my first smallmouth and largemouth on fly.

Meeting up with a fellow angler who I had met through an online blog and who had offered to join me for a day’s fishing (another one of the reasons I love fishing is the camaraderie of fellow fishers around the world) I headed further west into Massachusetts to one of the state’s most well-known trout streams. A tailwater fishery, it flows out of an enormous reservoir. Like many tailwaters, it is crystal clear and also a constant temperature virtually year-round.

Turning up a little early, I wandered back to the bridge I had just driven over to look for fish. Below me, several nice trout held station in ‘bridge pool’ (a feature of virtually every river I have fished in the world), hanging in the clear water. The slightly odd chap fishing on the bank, shouting loudly to himself and casting a large chunk of what I think was cheese at these trout, hadn’t apparently caught anything. Unperturbed, I tackled up quickly and once my new-found fishing buddy had arrived, we made our way downstream to try and find some more trout. 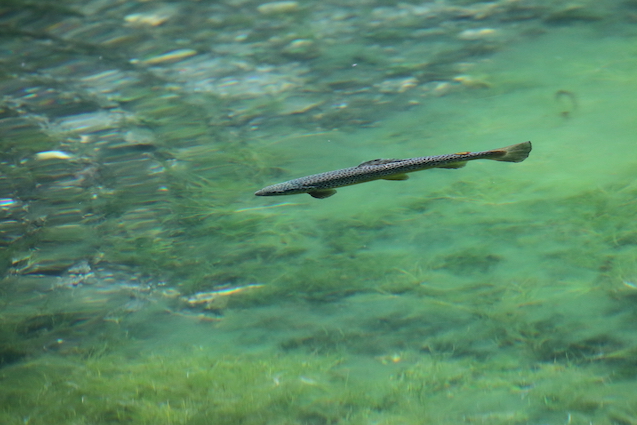 It didn’t take long until we found a couple of fish holding station just upstream of a submerged log. After missing a couple of trout myself and watching my fishing partner come angonisingly close to landing a nice trout hooked on a tiny dry, we made our way upstream to the river’s most famous pool, where two arms of flow from the reservoir meet, forming the characteristic shape that gives the spot its moniker ‘Y Pool’.

The river operates essentially as a put and take fishery (although I saw several anglers practice catch and release) with regular stockings happening throughout the season. Given that the famous pool itself is so much deeper than any of the other pools on the river and that trout are stocked relatively close by, it is stuffed with trout, by which I mean full of fish to almost trout farm densities. The pool is probably 25 – 30 yards wide and 80 or so yards long and there must have been at least a hundred trout in it. 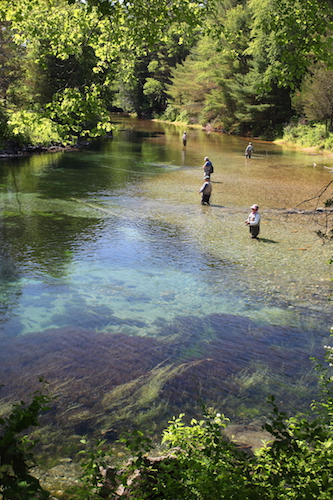 Anglers take advantage of this glut of fish and line up down the length of the pool, virtually shoulder to shoulder, casting flies over those fish all day. It was while I watched this scene in front of me that I had a rare flash of insight. A few months before, I had watched a TedX talk online, in which Nobel prize winning physicist George Smoot explains how we are all a simulation (it sounds far-fetched, however if you haven’t seen this talk, google it and go and watch it).

The memory of this talk prompted me to think about the point at which the fishing we indulge in becomes a simulation. As virtual reality devices and the games that use them become ever more realistic, I have no doubt that at some point VR angling will be developed: a chance to fish the perfect trout stream or bonefish flat whenever you want, from the comfort of your own home.

While I think that most people would agree that standing in your sitting room in your pyjamas, with a VR head-set on while waving a hand-set (or wearing a VR suit) would be classified as an anthropogenic simulation, at what point do we draw the line when it comes to ‘real world’ fishing? Watching those anglers standing shoulder-to-shoulder casting to trout entirely raised and stocked by other people, in a river whose flow and characteristics are entirely controlled by man’s actions, I questioned whether this wasn’t already a fair way down the line towards pyjama-clad VR fishing.

By extension, there are many scenarios that are anthropogenic imitations to some extent. At the extreme end of the scale, the fishing ponds in places like Singapore, where anglers sit shoulder to shoulder around a rectangular pool, pulling out fish simply placed there for them to catch spring to mind. Arguably, some commercial fisheries in the UK that are stuffed with fish are not a huge step removed from this.

Widening the web, one could argue (brace yourself here) that some of fly-fishing’s most hallowed waters are an anthropogenically generated environment; a simulation intended to satiate a desire for a particular set of circumstances. Heavily managed chalkstreams like the River Test are nothing like they would appear if nature were left to her own devices. In reality, a chalkstream left to itself would be much more  wild, with trees everywhere (including in the river itself), and the river corridor a long way removed from the manicured perfection that typically springs to mind when we hear the phrase ‘chalkstream’. 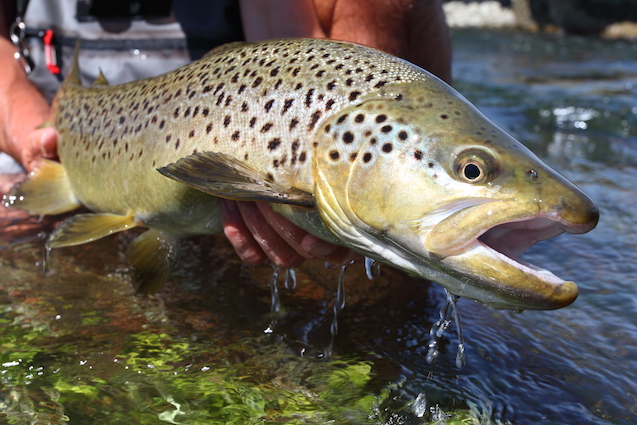 We altered the chalkstreams to their current form many years ago and in addition to this we manage their flows and levels. As many, if not all fly fishermen know, many of the famous  beats are heavily keepered, with bankside vegetation cut-back, in-stream weeds cut several times a season and paths neatly mown. In the clear water that flows through this managed environment stocked trout swim, placed there solely for the catching by the angler wandering down that mown path.

This is not intended as a criticism. Rivers like the Test are managed as they are to satisfy a desire in the angling market. The vagaries of the weather and beauty of the surroundings aside, how different is this however from a commercial carp pond? Both are largely man-made with the fish contained within them often produced at the hand of man. One can point one’s nose in the air and wax lyrical about the hallowed waters where fly fishing was conceived and their historical significance, but the reality is that all we are achieving with this action is to further the perception some people hold of fly fishing as a highfalutin past-time.

Eventually, in a few years or decades time, if you make the change from the ‘real’ river, don that VR head-set and select “Location: River Test  > Difficulty level: Expert” and make the cast to a ‘wise’ brown trout holding in a tricky current where the fly is sure to drag, you might find that the experience generated is better than the real thing. At that point, is it a step forward or is it the beginning of the end?