Peter Anderson spends a lot of time on the water and has realised that he turns to just two nymphs when fishing subsurface. He shares them with us.

Looking at my fly box, I notice that I have quite a few nymph patterns. A lot of them are a hangover from my early days as a fly tier (not that long ago come to think of it). It was the usual story, I bought a fishing magazine, saw an article describing how to tie a certain fly and a write up of how good it was, so I bought the materials and tied a few up. I rarely fished them though! It occurred to me that, in fact, something like 90% of my fish come to just one pattern, 5% or so to another, with two further nymphs accounting for the balance. So you can get away with just two patterns if you want to. So what are they?

Yes, no magic fly here, a boring old hare’s ear. This pattern accounts for the vast majority of my fish. No surprise really since it is the fly I fish nearly every time I go fishing! The pattern is pretty straightforward:- 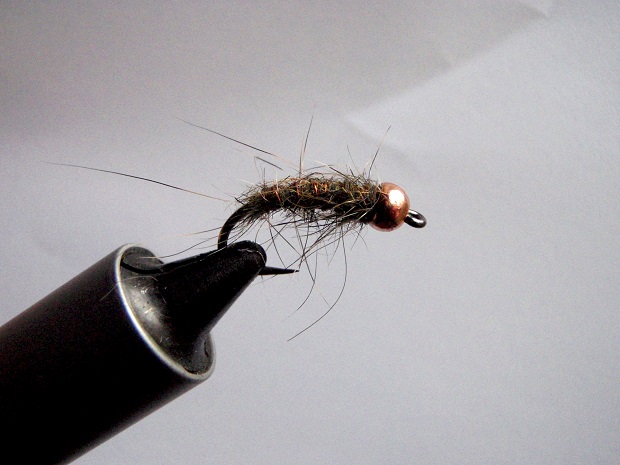 Use a barbless or de-barbed hook (TMC2487) and thread on a tungsten bead. The thread I use is nanosilk. Tie in the tail which is 3-4 grizzle fibres and don’t worry too much about the length, it really doesn’t matter. Tie in some fine wire too at this stage. Dub the thread with hare’s ear fur and wind up to the bead to create the body. Rib this with even turns of the wire. Dub on some squirrel fur for the thorax then whip finish. Easy. I tie these in sizes 14-20, for the 14s and 16s I use a 2.5mm bead, for the 18s and 20s it a 2mm bead. The colour of the bead can be varied, most of mine are either black or copper but I also tie them with pink beads (for grayling in particular) and white beads which are good for sight fishing. The thread is either black or olive and the hare’s ear fur is either natural or olive. This is the basic pattern but the different sizes, bead colours and body fur colour give a wide range of flies. The pattern can be varied slightly, coq de leon for the tail instead of grizzle, or a partridge feather instead of the squirrel for example.

This pattern is hugely effective everywhere. For spring and summer trout fishing, size 14 and 16 fished duo style is deadly on a small stream. I have caught trout on many different rivers with these – the Usk, Box Brook near Bath, Crowdundle Beck in the Eden Valley, the Taw in Devon and the Little River Avon in Gloucester  to name a few. On the chalk streams for winter grayling it is equally effective, fished in size 16 initially but then dropping to 18s and 20s as the weather gets colder.  I fish these as a pair with an indicator leader rather than using the duo, the dry tends to catch a lot of out of season trout!

I use this for short line nymphing in deep, fast water where the hare’s ear is not heavy enough to get down and stay down. The tying:- 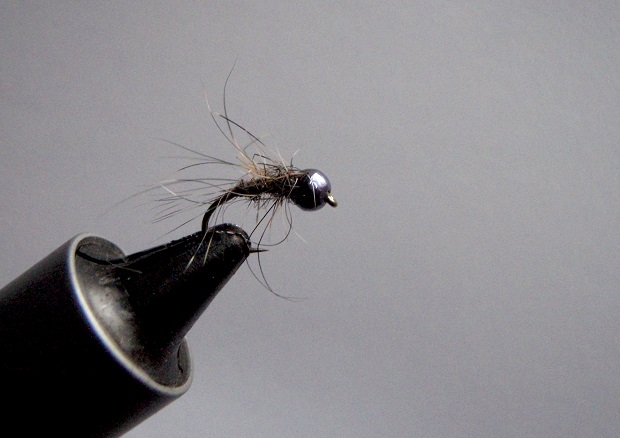 I use a PMC 5262 which is de-barbed. This is a straight hook but the TMC2487, a curved hook, would do as well.  Slide on a tungsten bead – 3mm is needed here, then wind on a single layer of lead wire to add weight. Tie in some copper wire and then dub the thread with a mix of hare’s ear and squirrel fur. Wind this up to the bead then rib with the wire. That’s it!  This is also available commercially from Stuart Minnikin at Yorkshire Dales Fly Fishing (http://yorkshire-dales-flyfishing.com/flies.htm).

This pattern is fished Czech nymph style on a short leader with all of the fly line held of the water and using an indicator to detect the takes, which can be subtle so strike at anything. It can also be very effective fished down and across through fast water but be aware that the takes using this style can be savage! A friend of mine had his rod smashed on the Test using this approach.

As a matter of interest, the two flies that accounted for the rest of my fish were a pink UV shrimp and a size 20 pinkie.

Now, I am not advocating that you throw away most of your flies and stick to a couple of patterns. It can be done though as my experience shows. I think that the most important factor is having confidence in the fly, the belief that it will catch fish. I have total confidence in these flies almost, I am ashamed to admit, to the pint of being impolite. I have fished as a guest at times and ignored or rejected my host’s well-meaning advice concerning fly patterns and put on a hare’s ear. The thing is though, it pretty well always works!

Take a look at Peter's excellent blog - Walks and Fishes