In this section I'll try and go through what constitutes fly fishing from a sea kayak from my perspective. I'll look at the environment I'm looking for and the tackle involved.

My hatred of wind is second to none. It's never been useful for any activity I've ever undertaken (I don't fish loch style). When I'm looking to take the yak out, I want winds below 12mph. The areas I'm fishing don't have much in the way of a tide (approx 5m), therefore the wind is the main factor for me to paddle with, or battle against. Actually 12mph can be a bit lumpy, but I'll tolerate it as long as lighter winds are forecast for the session. Unless you're fishing hard against rocks, you're usually able to orientate the yak by using the anchor trolley so that the wind is behind you. Because you usually have an unrestricted back cast, you'll be surprised how far you can cast, and also how easy it is. But remember, you don't need to cast that far anyway, you'll see fish under the yak, or almost jumping into it they are so close. Casting far is more about achieving the depth you're after and covering water than reaching far off fish. 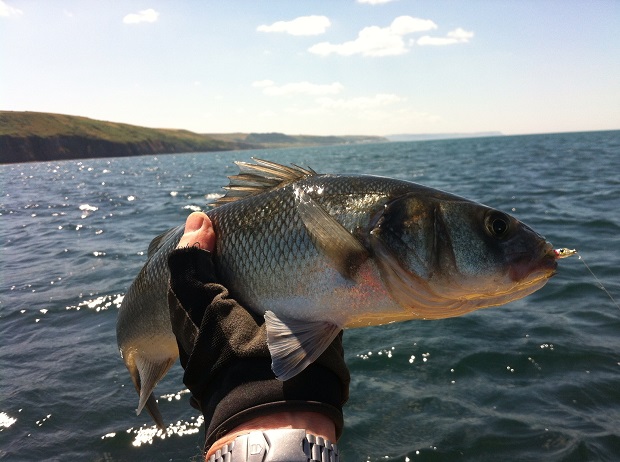 I have to say that I'm a fit and healthy 40 year old. I'm 10st soaking wet but I have no problem in paddling the yak. The greatest distance I've actually paddled is approx 3 - 4 miles in good conditions and I don't remember any aching limbs.

Do yourself a favour. Launch the yak at high-ish tide. You'll have a shorter roof - sea trek with your yak. Now, to get the same benefit when you come in, your going to have to stay out for the shift (12hrs). If you stay out for half the shift then you could be coming home to a few hundred meters of rock pools, bladder wrack and other obstacles. You could of course reverse this scenario and launch with fresh muscles at low tide and come back in on the high for an easy trip back to the roof rack.

Yip, that's what I'm fishing for in the sea. The biggest advantage I see of using a sea kayak to fly fish from is that you can get to areas which are too dodgy for the skippers to take their boats into. I was out with a skipper over the summer and I couldn't believe how far from the shallower water he needed to stay. He has a 28ft boat with sophisticated echo and charts, but even with these, he was very cautious of underwater snags.

The yak has a draft of less than a few inches. Running aground doesn't come into the equation. I find that you can fish areas (which may be very small) where the boats won't go, and the beach casters either can't cast to, or would lose too much tackle fishing. Many a time I've almost been sitting on the kelp fronds at low tide, watching shoals of bass and sandeel moving through the water. 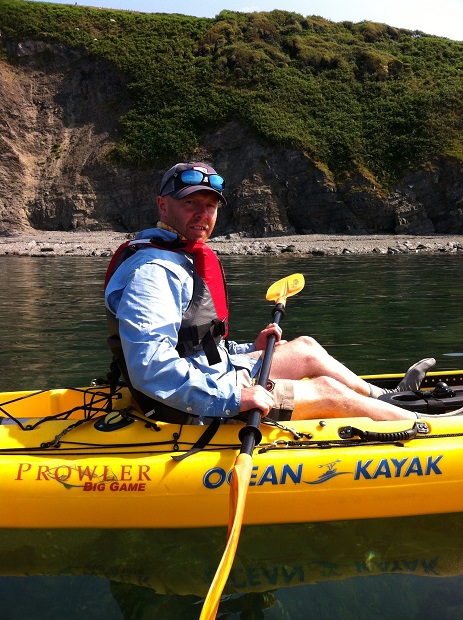 The other use I have for the yak is getting to rock marks that I can't access by foot. Paddling to the marks, then pulling the yak up onto the rock (usually easy because of the slippery kelp). This can only be done on very safe days with a good knowledge of the mark (extensive of recon), these areas can be deadly for anglers, though they also offer brilliant pollock fishing. Always wear a life jacket when fishing rock marks. I'm pretty sure I'll be picking up my first wrasse on fly this coming season from such an inaccessible mark.

I like to search the featureless beaches looking for shallow reefs, there's plenty of them. You can sometimes see them from high cliffs when walking the dogs. Another good tip is to walk the beach at low tide looking for the odd patch of kelp poking through the surface, a sure fire sign of a reef.  It doesn't need to be big, the best bass mark I know is a reef 20m square, there's no rip and it fishes two hours either side of low water. I'd never have come across this mark if it wasn't for a day trip Sharon and I took paddling along the cost.

Tackle up on the shore before you get into your yak. It's surprising what a chore it can be, just trying to string your rod can be difficult. As I said in part one, my buoyancy aid has a zinger on it with nippers and a pair of forceps. This is all the tackle I have on my person, wetsuits don't have pockets, the rest is attached to the yak in some way.

I have a wallet that I keep my flies in. I keep a spool of tippet in the wallet. The wallet is attached by a lanyard to the yak, just behind my seat. I use the same simple system for attaching my net. That's it, the less you have in the boat, the less there is for line to become tangled around.

I use an 9' 8wt rod in the yak. That's at the heavier end for the bass, but it allows me to deal 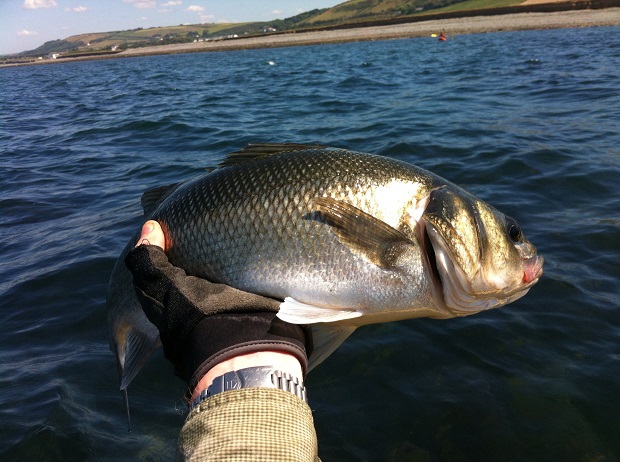 with the team of two flies that I cast. Usually it's a 4 inch DNA clouser on the dropper and the same size surf candy type thing on the point. Now if I was standing up on the shore, I could get away with a 6wt with this terminal tackle. In the yak, your loops can come past you quite low, a lighter line makes them come through lower. Your haul is also limited in the yak, you can't hold up the same amount of line as you can when standing up. The heavier line makes the whole thing easier. I like something with the weight towards the front taper in the head, something like an airflo sniper or a rio outbound short. Both have heads of approx 30ft. These head profiles want to pull the head and running line out of the tiptop from the first false cast. Often, you're left with only 10ft of line out of the tiptop at the end of the retrieve. This head profile helps make every false cast count, right from the lift off. Compare this to heads where the front taper is relatively light, with a lot of weight close to the rear taper and you will see what I mean. I'm mainly using a fast intermediate or a floater. I sometimes fish a crease fly on the intermediate, I've even had pollock hit those on the surface!

Talking of pollock, I'm looking at a Di7 airflo sniper with 20lb tippet and a big heavy clouser hanging off the end. I think the airflo lines have the edge when fishing a sinker over rough ground. Because the braided cores have so little stretch, you can feel when your tapping on the kelp with the line or fly. Next cast it's just a case of beginning your retrieve sooner to avoid snagging.

As far as reels are concerned, something plastic like an Orvis encounter can handle being knocked about, there's nothing to scratch! Drag is largely irrelevant, bass are quite easy to control and you don't allow pollock to do anything, that's just asking for trouble.

Hopefully this has given you a heads up and more of a clue to the ups and down of fly fishing from a sea kayak than I had when I got started. On your own, it's a steep learning curve. The biggest difference it has made to my fishing is that it is something that Sharon my non-fishing girlfriend can get involved with. She can potter about in the bay, while I am fishing.