It can sometimes feel we have to work to earn a fish. Especially so when it comes to salmon. Alexander Moghal had to jump through a few hoops but it was worth it in the end.

I’m sure that many of us from time to time get asked “Isn’t it boring to go fishing?” by friends or family members. And it always makes me smile when people put that question to me, and then add “...because after all, you just sit there!”

Nearly always, I find myself simply smiling and replying ”Yes, you’re right!”, because I also know that it is pretty hopeless to convince them of anything else.

But as we all know, we can accuse our chosen sport for being many things but never boring! Particularly not in light of the many adventures and excursions we end on, as a result of seeking our magic moments with fly rod in hand. I for my part have been chased by bulls (and even chased by cows who thought they were bulls), found myself trapped in mud while wading deep, gotten electrocuted by electric fences, gotten tangled up in barbed wire and many other wonderful memories, as I am sure you have too.

So allow me to share with you another anecdote of how “boring” it is to go fishing.

A few years back, I set out very early one Sunday morning in the month of September for the Aberdeen Don - aiming to be there by night fall.

I wasn’t unrealistic. It was only about 550 miles and I had covered that distance in a day on several occasions. In fact as I was travelling alone, I was confident I would make it in time. There could and would be no hiccups!

Being an ex-officer I had applied all my training and not left anything to chance - or so I thought. 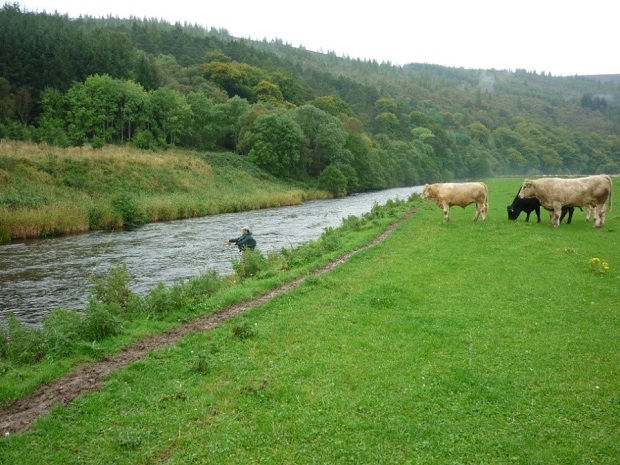 The car had been serviced. My rods, reels and lines examined umpteenth times. Maps poured over, underhanded agreements made at work to cover up the fact that I would be away for a week during our busiest time in the academic year. I had even imported my in-laws from Italy to provide company for Martha and the kids (talk about a Faustian bargain with el Diablo). The latest weather and water reports had been verified. Well you get the idea.

From my home in Hertfordshire to Dumfries in Scotland, the journey passed uneventfully and I got there during the afternoon. Just outside Dumfries I was going to make a pit stop and collect a few flies from Jimmy Younger, a quite well-known salmon fly tyer who is the only one I know who still does fully dressed classic salmon flies commercially. I have "known" Jimmy for a decade over the phone and thought this would be an excellent opportunity to attach a face to a name. He's been featured in several books and videos (yes, that long ago) and is quite a knowledge mine when it comes to discussing salmon flies.

Anyway as I left their place - which literally is in the middle of nowhere - I had barely driven a 100 yards before a God almighty crack sounded, and I immediately knew something had gone terribly wrong! The smell of burnt oil added to my premonition. So I pulled over, got out, and looked beneath the car and sure enough, there was oil spilling out everywhere. This wasn’t good! So I limped back to the house and asked if I could borrow their phone as there was no mobile reception in that area.

Now normally the recovery service guys are quite good - except when you are trying to describe a location that doesn't show up so easily on their Sat Navs, in the middle of the Scottish lowlands.
An hour and half later the RAC guy did find his way - and upon examining the car, scratched his head with that foreboding look that we all dread and  said "yee've creekd ye'er eoil-sump n cannae dreyoive anneyvhere!".

I’m afraid Scottish dialects were not on our curriculum when I was at school in the Indian subcontinent, but after about 10-15 minutes it dawned on me that he was saying "you have cracked your oil sump and cannot drive anywhere". During this time the RAC guy had been looking at me as though I was dumber than a bag of hammers!

I'll spare you the rest of the "lost in translation" but after about 45 minutes I had managed to comprehend the following from the RAC chap :

- It's late Sunday afternoon and there are no garages open here at this time.
- I'm off my shift now so you will have to call us again tomorrow to come and tow you.
- This won't be easy as Monday mornings are our busiest times .

The following morning, or mid-day to be accurate, another RAC guy turned up and towed me to their designated garage some 10-15 miles away. Upon arrival, the garage kindly informed me that they would not be able to look at it for another two days as they were buried under work. And from what they could see they would have to get a new oil sump from the nearest dealer who was some 60-70 miles away, who in turn probably would have to order it from the main distributor which would take a week or so! While I was talking to the garage manager, the Ghillie on the Don called me to find out how things were progressing (I had sent him a message earlier). I told him that for the moment I was stranded, and his response was "well hurry up - I just landed a 15 pounder this morning and the conditions are perfect." - I won't repeat here what I thought of him at that moment!

But the upside was that I must have looked quite deranged and maniacal after the phone call because suddenly the mechanic got the car on a ramp and could do a temporary repair which could at least get me home, but not until Wednesday!

“This might be work.”  I thought and managed to find a local rental car company and booked a car for a week. In my mind’s eye, I was already laying out a perfect Spey cast with 15 pounders just waiting to take the fly. So imagine my surprise when I turned up at the rental company’s offices an hour later to collect it, only to find out that they had no cars! More explicit outbursts unfit to be repeated here.

A new goose chase ensued to find another rental car company that actually had cars, and finally by Monday evening I was on my way. 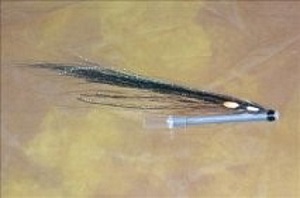 Now the whole area from Perth up towards Aberdeen looked immensely picturesque on Google Earth while I was doing my route planning. But in darkness and with thick fog and sleet, it was a less than charming drive. Seeing the car in front of me hit a deer and almost skid off convinced me of the wisdom of "better to arrive late than never to arrive at all".
I finally turned up at the inn around midnight app. 27 hours later than originally planned, and had to haul the landlord out in his pyjamas, who was looking less than pleased. But frankly, by now I was beyond caring about anyone or anything.

So Monday had merged into Tuesday before I had even managed to get to my destination - grey, dreary and gloomy was the outlook for the Tuesday and to be honest, it matched my mood. Especially because I was awoken way too early by the Kunekune pigs just outside my room and their morning choir oink’ing session.

But enough with this negativity, I thought - I'm here now and that's what counts. So after breakfast I met up with the Ghillie and we made our way to the river.

On this beat, the Don is a medium sized river and my 13 ft 9 wt outfit was quite sufficient. I even had an appreciative bovine audience!

But rather than the usual "down and across" the Ghillie suggested fishing a Sunray Shadow/Collie Dog type fly - cast across and then almost retrieved with sharp jerks of the rod tip and taking line with the left hand. This was new to me - I knew these type of flies had to be fished more lively and in the past on the few occasions where I had used such a fly, it was fished by throwing a downstream mend immediately after it landed, to make it whip across the pool faster than the flow of the current.

The morning session drew a blank but after lunch I had two fish visibly take the Sunray and just briefly managed to feel one of these on my rod before it dropped off. But the takes were astonishing! They fish threw themselves out of the water to take the fly, almost like trout, and it sounded as though a cow had fallen in the water!

Nevertheless I called it an early day and packed up around 5'ish even though there was still some fishing left - frankly I was too exhausted.

Wednesday was a brighter and lighter day than the previous but the morning session still drew a blank. After lunch we fished a deeper and faster running pool which is why I had taken out the 15 footer. The Ghillie had suggested fishing it the traditional manner of down-an-across and so a small 3/4'' brass tube in Willie Gunn colours went on the end of the leader.

The head of the pool produced nothing, but as we reached the belly of the pool the Ghillie said "you're coming up to good spot" and on the third cast after that I hooked a stone on the river bed. Or so I thought because suddenly the stone started to move! 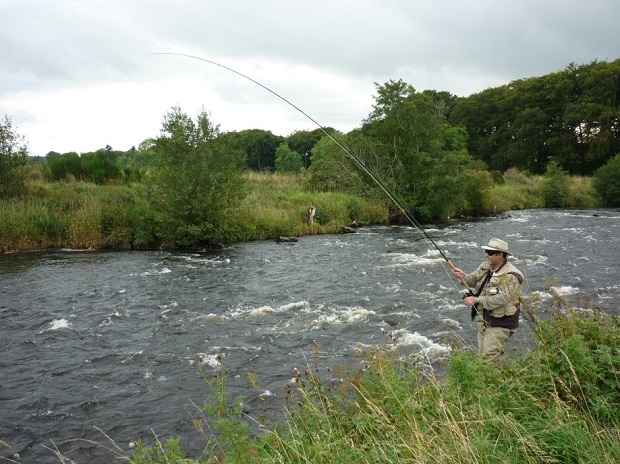 A salmon had taken my fly - and not dropped off!

I was shocked at how strong he was and after a surprisingly long fight he finally showed his paddle tail in the surface. Eventually he was netted and came in at 10 1/2 lbs. with the little brass tube halfway down his throat! Being in full wedding suit he was released.

By Thursday the river had become completely discoloured and risen too much too be fishable - it had rained all night and continued to do so during the day.

I had to cut my trip two fishing days short and leave on the Friday so I could get to Dumfries in time to collect my car from the garage before they closed for the weekend.

On the way I stopped for a brief pilgrimage by the river Spey at Grantown-On-Spey which looked to be in really good condition - so come spring time I would love to have a go. And I shall depart on the 1st of January to be sure to get there in good time and good order - and travel by oxen which have no damned oil sumps that can break down.

Collecting my car at the garage and returning the rental car was just as "Laurel and Hardy" as when I had initially been on my up - I'll spare you the details. Suffice it to say it included a taxi ride with a guy from the TA who was adamant about demonstrating his survival skills at any given opportunity.

Just before returning the rental, I noticed that there was tube -fly stuck in the left side-view mirror with a long length of leader - and what's more, I recognised it as being the Ghillie's fly! When I had seen him in my rear view mirror, waving very energetically with his hat, as I had pulled out from the inn that morning, I thought he was merely being friendly!