Allan Liddle tells us about a place he knows...

Once upon a time the quickest way north past the Kyle of Sutherland was to take the short dash over the B9176 (more locally known as the Struie) and down towards the magnificent Thomas Telford's single span iron bridge at Bonar Bridge spanning the narrow point where the Kyle starts to open out.  Normally this meant speeding past without much of a second glance as you ventured to the well known angling ‘Resorts’ further afield, places with names such as Brora (loch and river), Helmsdale, the Caithness Lochs or possibly a date ‘Across the Firth’ with Orkney, or West towards Lairg (Shin loch or river) with Altnaharra, Oykel Bridge, Laxford, Scourie, Strathnaver amongst some of the names instantly recognisable to anglers. 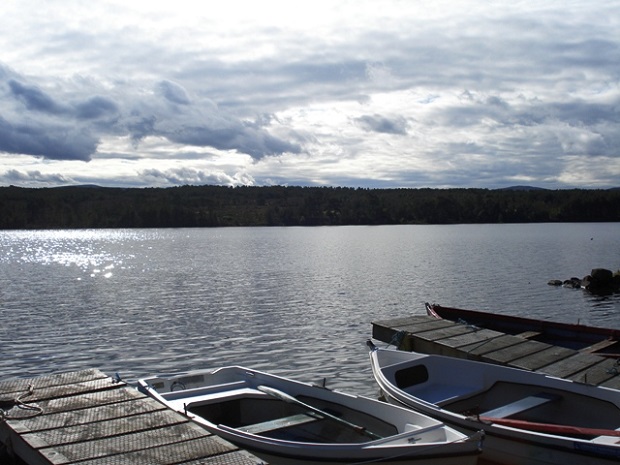 Back to Bonnar Bridge though and just tucked away over the hill lies the often overlooked Loch Migdale, sizeable, fertile and diverse and a water that you can search and roam for hours.

Getting there’s pretty easy, simply take the ‘Spiningdale’ road that lies directly ahead of you as you come off the bridge heading north and follow it up the wee hill where you’ll see the loch in the glen down on your right.  Then take next right, and second right again and you’ll find yourself at the home of Rob Jones, the tall likeable riparian owner of this water who'll direct you to the boats, point out the best bits of bank and advise on what the killing flies and best drifts are. 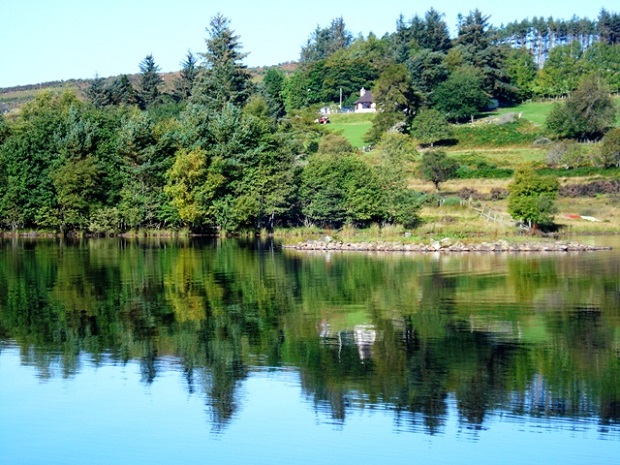 There’s plenty character to Migdale as well, dominated on the north bank by the big solid glacial lump of Migdale Rock and tree lined banks that shelter the water from all but the strongest of gales so it certainly looks the part.  Those trees also add to the charm and have a noticeable difference between predominantly firs on one bank and deciduous on the other coming right down to the water’s edge in some places and leaving enough space for a cast or two in others.

The shoreline is interesting too from the many points, bays, waterlogged trees, sunken islands, overhung branches, big weed beds, big boulders and even a ‘crannog’ surrounded with a mix of stones and sand that make up the shallows around it.  There really is the chance of fish from all of these areas which simply seem to draw you on and on further down the loch as you explore each one.

Add to this the sometimes very productive ‘off shore’ drifts, where trout can be found in surprising numbers and can offer a size range from three inches to three pounds, don’t be fooled into thinking all residents are in the ‘Trophy’ category though, the latter would be a real exception but they are most certainly there. That said the average is a more modest eight to ten ounces which isn’t too shabby for a wild water, besides just like the residents common place through the Scottish uplands, what they lack in size they more than make up for in power and fighting prowess. 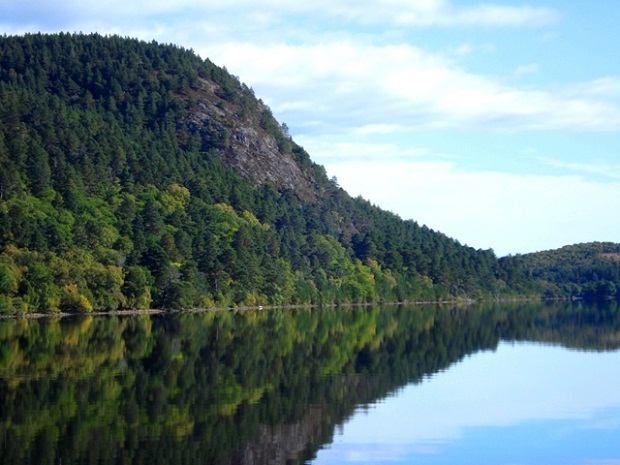 When I’m working the deeper water away from the bank I’ve fished bright patterns to attract those Daphnia and Caenis feeders, Dunkeld, Peach Muddler, Orange Kate and Soldier Palmer to great effect, however those that know me will testify to the fact that fishing deep isn’t my first choice and it’s with ‘surface moving short lined bob flies’ or fish stalking dries on a floating line you can really get something special happening on Migdale.

Buzzers tend to mark the first of the surface sport, with olives not too far behind, both tailing off a bit through the high summer only to return again from early September through the ‘Back End.’ 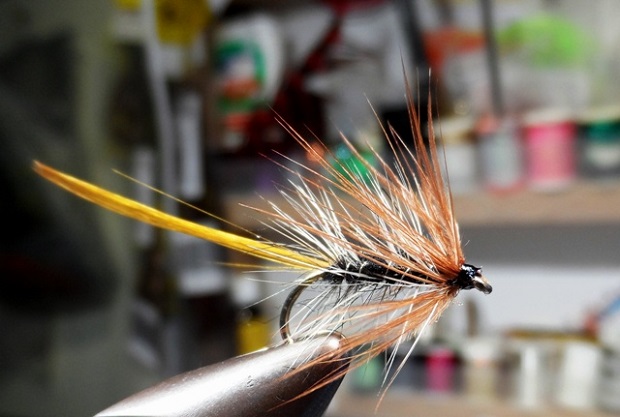 this water can really come alive when the Green Drakes appear and the fishing moves up a notch or two. Those big mouthfuls grab the trout’s attention all right and I’ve done well here with my simple mayflies as well as Bob Wyatt’s Veyatie Black, really good when ‘Ginked’ up and pitched in front of cruising feeders, or allowed to swing ‘dead drift’ in front of those ‘fishy bits.’

Back to Mr Jones again and those familiar with the Scourie Hotel might recognise him in his regular stint as the Hotel’s second Ghillie, famous to those who frequent that famous Angling Mecca, but not as famous as one of the other of Migdale’s riparian owners Andrew Carnegie. Once part of his extensive Highland Estate it was reputedly stocked in the past with exotic species ranging from Catfish to Tench, not that they’ve ever turned up in the angler’s returns or even accidentally caught up in the Eel nets that used to be in place here they’ve either simply died out or (as I strongly suspect) never been present in the first place. Wouldn’t be the first water in these parts that’s been reported to be a ‘course’ venue, Loch Eye next to the not too distant town of Tain was also said to hold similar residents, again though they seem to be more than a little ‘elusive.’

So next time your line rips off the reel it probably means you’ve hooked a ‘Trophy Trout’ rather than the offspring of some kind of ‘exotic species’ (Well exotic to the North at least). 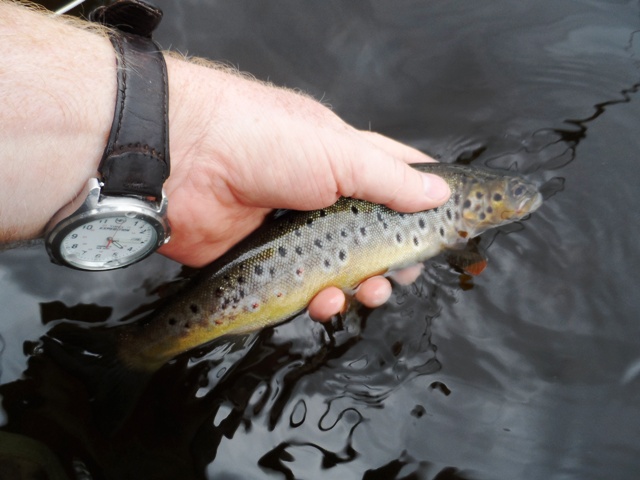 There’s a wee bit of a downside to this water though as in recent times it held a smolt cage where escapes were sadly not too uncommon.

Certainly effected the trout fishing often making things difficult, either you could hardly reach the resident trout through the rank and file of the newly escaped masses of smolts, or for whatever reason the browns had simply ‘switched off.’

But there was a little ‘upside’ as well as it appeared there might just have been possible for these silvery smolts to access the Kyle of Sutherland via the Spinningdale Burn (which exits Migdale). If they can get out then no reason they couldn’t get back in again, although to be fair it would take a decent amount of water running through the small burn, a burn heavily hampered with snags and obstacles

The cages might help explain the growing number of large fish that have shown up in the catches of recent years, trout taking advantage of the overspill of high protein pellets used to feed the net’s inhabitants, not everyone’s cup of tea but not the fault of the trout to take advantage of an available food source. 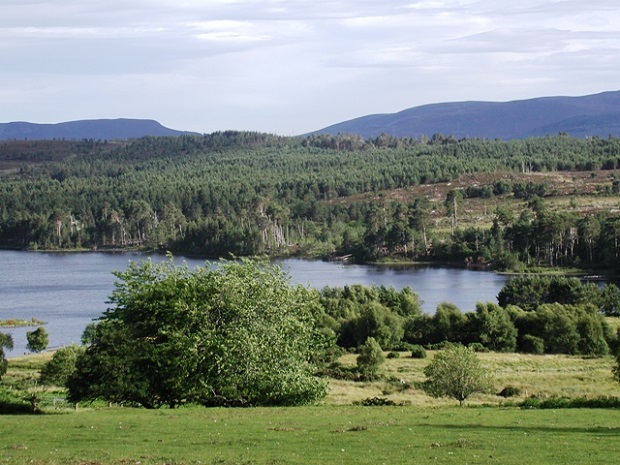 That said the better news is the fact that at present the cages are dormant and for the time being the loch is back to more ‘normal service.’

It’s not only for the fishing that Migdale’s worth a visit as there is plenty evidence people have lived around its shores for a very long time, enough archaeology to attract the attention from the ‘Time Team’ a few years back, invited by Mrs Jones to investigate the ‘Crannog’ isle and a number of other points around the area. There’s excellent display boards detailing the Neolithic past to be found by the large car park area on the Northern road side shore. 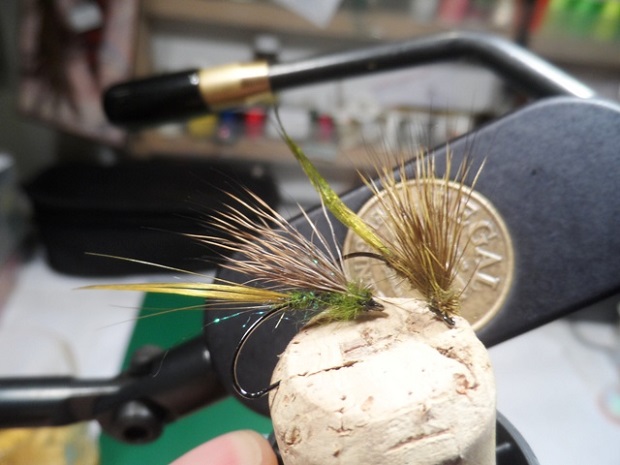 And some well marked and interesting walks laid out around the loch and through the surrounding woods for the times when the trout are not in a co-operative mood.

This coming season local trout guide Roger Dowset of Troutquest has gained permission to add Migdale to his repertoire meaning any unfamiliar with the area can call on his excellent services and have someone else lead you to the fish. With several lochs and a few streams available to Roger there’s always access to some fantastic fishing, certainly well worth considering if having a knowledgeable guide show you around takes your fancy. 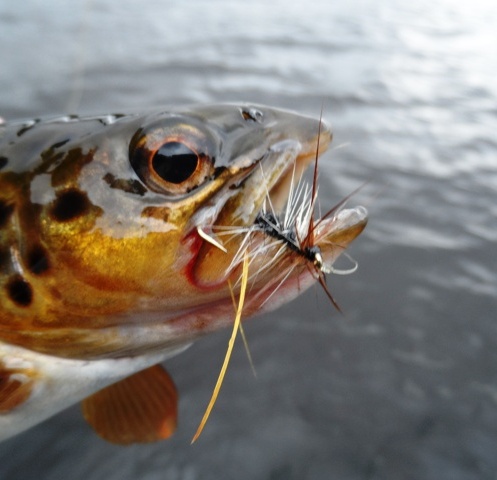 So if you’re ever in the area you could do much worse than looking Migdale up and spending a few hours wetting a line in search of the resident browns, once you’ve visited I bet you’ll be keen on a repeat visit soon.

Allan will be at the British Fly Fair International this February 8th and 9th and keen to demonstrate some of his wild brown patterns including the Green Drake Mayflies that do so well on Migdale. He’d be delighted to meet any Eat Sleep Fish readers and give a few ‘pointers’ on what to fish and where through the wild Scottish uplands and isles.

You can read more from Allan via the Scottish Anglers site. A great place populated by some nice people