Andrew Fowler takes whatever the South African weather is prepared to throw at him and heads off in search of trout.

Trout may well now be considered South African, and in that regard I am wholly in agreement with Prof Duncan Brown (“Are Trout South African?”,  Picador, 2013). Trout are however, not Zulus. Of this I am sure. I speak on behalf of Trout here in KwaZulu Natal  when I make this assertion, and I consider myself eminently qualified to do so, since our original brown trout and I both hail, genetically speaking, from Scotland. (They from Loch Levin, I from the Firth of Forth).  And when, against my better judgement, I return a Trout to the water after a hard fight in the summer, it appears to wilt, just as I do in our summer heat.

The air seems thick, and somehow low on oxygen, just as the water is when it starts to venture over 20 degrees C. The mornings start fresh enough when the summer sun is up from around 4:30 am, but if you are working in your garden, or walking up a river valley, you can be sure that you will be sweating by 7 am, and feeling wilted by 8 am. 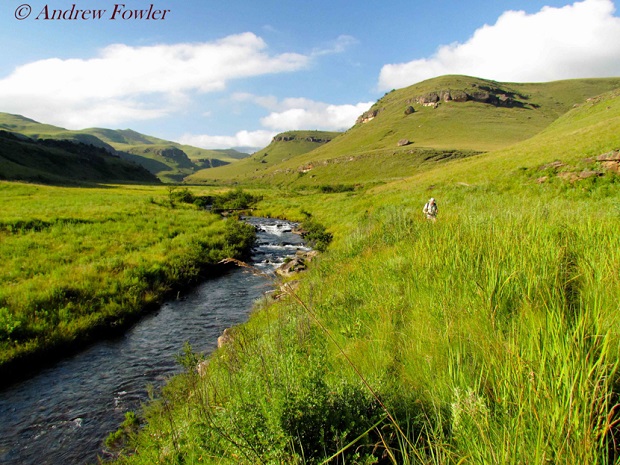 The rest of a bluebell summer day, is for me at least, a thing of endurance and mental toughness. My Zulu speaking friends barely mention the heat. But for me, summer is something I endure. Just as my fly fishing friends in the Northern Hemisphere get through winter snows by tying flies and dreaming of good times on the river during the season, so it is for me during our mid-summer here. It is a time of exceptionally bright sunshine, warm water, and wildly unpredictable weather. Every day presents the possibility that a fly fisherman, alone and far up some river valley, will first be roasted alive, and then be dealt a barrage of dangerous lightning, life threatening hail, and flash floods. 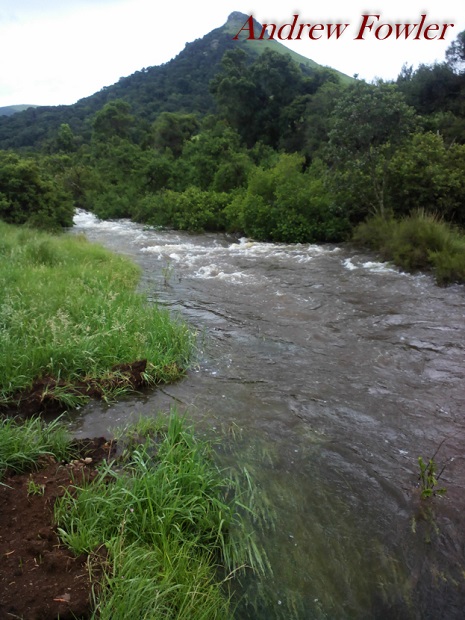 So with this clear picture of how things are here on the Eastern seaboard of South Africa, you can assume that we stop fly fishing, and move between the swimming pool, and the safety of the veranda. Right?

It is Christmas break you see, and we are on leave from work. We have time, and Santa may just have graced us with some new fangled tackle that demands our attention. And besides, the rivers are flushed. Gone are the algae and sticks and the slow, miserable looking water of early spring. The rain-fed rivers, when they are not in spate and dirty, are simply sparkling and dancing along their course. 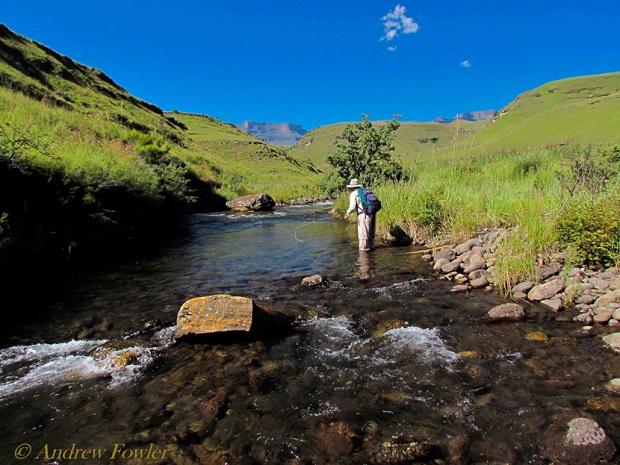 We can also convince ourselves that where we live (typically at lower altitudes and in warmer climes), is not the same as where the trout live (above 1200m in altitude, and definitely cooler). It will be cooler up there. And sometimes it is. In fact it usually is, but there are times where one is high in the mountains, on a lovely stream, and the temperature under a blazing sun, is 30 degrees C!

Such times are almost unbearable out on a stillwater. This is especially so if there is no breeze, in which case the venue is just an awful oversized tanning bed, with a broken thermostat and no mercy. My own view is that it is better to be on a lively stream if you find yourself out in this weather. The water surface is broken despite the absence of wind, and the rushing water is as highly oxygenated as physics will allow. On a stream you can wade a little deeper, take a dip, splash your face with bubbly water, and live in hope of a shady tree around the next corner.

In its natural state, our upland landscape would be entirely devoid of trees except for rare clusters of montane forest on the South facing slopes where these are steep enough. 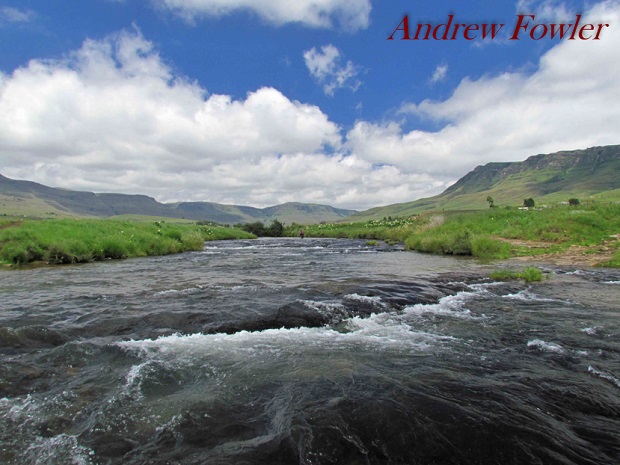 Heading up higher into the hills for cooler water generally means entering the greater Drakensberg park. These regions are thankfully in pristine condition, but this means they are tree-less and  there is therefore  often no respite from the sun, high overhead. Furthermore, being at altitudes of 1800m ASL and more, the air is a little thinner and sunburn sets in remarkably quickly.

Of course the odd cool day is far from uncommon, and I suppose these are the ones we should be picking. But as any working family man knows, the days are often picked for us, and at least several days in advance, and without undue attention to accuweather or yr.no. If we were to pick well, then the day would be warm (18 degrees C perhaps) and with intermittent drizzle or rain. It is also likely that at times it will brighten up. The mist will lift, and one might see small patches of blue sky. If this is the case, you will get sunburned all the more. One assumes it is cool and cloudy, and therefore suncream is far from one’s mind. It gets me nearly every time!

On one of these hot days a storm is almost inevitable. 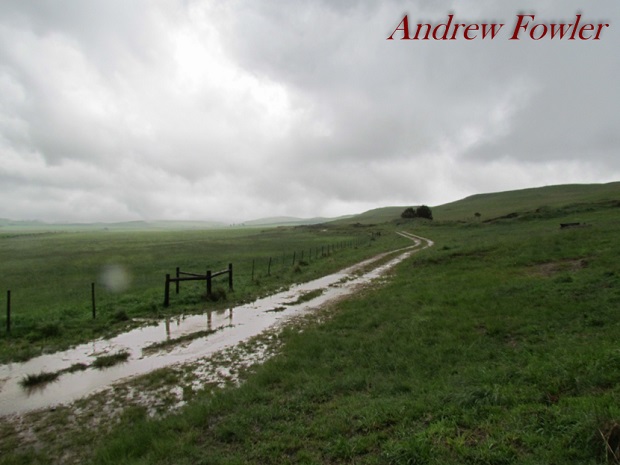 The chances are it will be a wild and terrifying experience. There is something about being out there in the hills with the lightning striking all around, and big ice-cold raindrops bombing you from thirty thousand foot up, that makes one feel very small and exposed. We tend to take note of rock overhangs during the walk in.

But you want to know about the trout. Yes of course. The trout are there. They are browns in this part of the world. 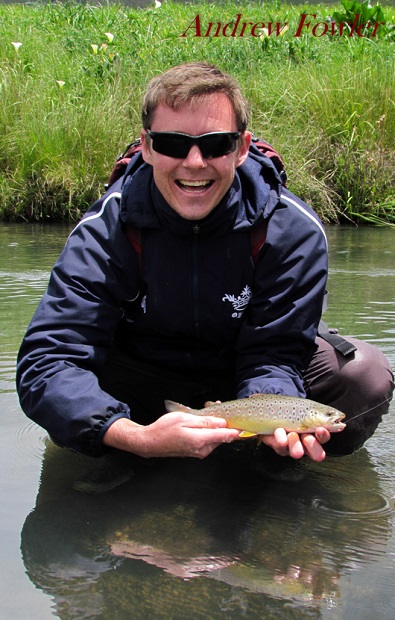 Lovely lively little fish. 8 to 10 inch fish are the norm. 12 inch fish are common. Anything larger is to be photographed and celebrated, but they can go to 20 inches. With even the mountain streams hovering around 17 to 21 degrees C, getting them in quickly and releasing them without undue strain, or time out of the water for photos, is important.  Browns everywhere are stubborn fish, and here it is no exception. They have their days where they all but disappear from the river, causing  the best of us to question how many are left. On other days they are evident at every turn, darting under overhanging grass, scuttling from beneath your boots, and dashing out into the stream to grab at your fly.

On one of those days of divine co-operation, the fish will usually hold deep, below bubbly white water, requiring the most dense of beads to get the fly down to them. Tungsten is best, and to my mind a small fly with a 2.8mm bead or smaller, on a slender tippet, gets you down to where you want to be. 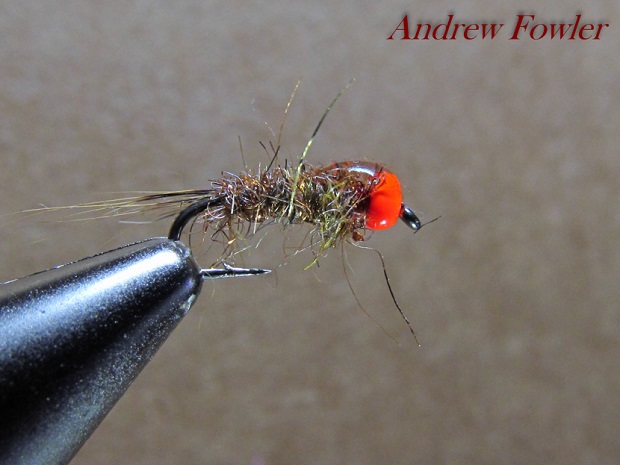 Rainbows exist in the rivers a little further South of here, and also to the North, but in terms of a daytrip venue in and around the KwaZulu Natal midlands, browns are the norm. No one is complaining.

Some believe that browns are less inclined to come up to a dry. I don’t think you can make this generalization. Browns surprise one.

Last year I was fishing a small mountain stream that was flowing very strongly. In fact all the pools had turned into very fast glides. At a point just after an encounter with a snake (another summer fishing hazard), I came across some rough white water, with a smooth piece of welling water, the size of a dinner plate. A fish rose in that eye of glassy water. I had a beaded nymph on the business end, so I threw it in there a few times to no avail, except that the fish rose to my indicator twice. On that cue, I put on a dry, aimed carefully, shot it in there for a two second drift, and had him first cast! 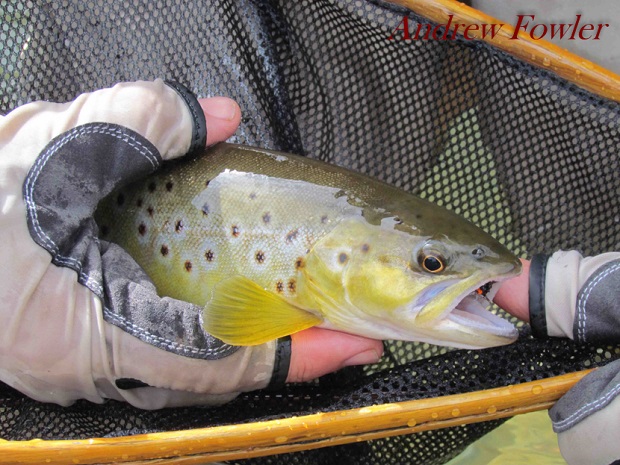 Such are the joys of mid-summer trouting in the place of the Zulu.

Read more from Andrew at Truttablog