Nick Thomas has come up with an "outside the box" pattern that is incredibly simple but hugley effective.

I was discussing flies with a bloke on the bank; he'd seen me land a couple of fish and wanted to know what fly I was using as he wasn't having any action with his. Now his fly looked like it would be right at home on a Christmas tree and was almost large enough to have its own set of lights, so I tactfully suggested that he might want to try something a little less gaudy and maybe also a tad smaller - if he had something suitable. When he opened his large wooden fly box I was glad I had my Polaroids on, although a welding mask may have been more appropriate. Much bright and shiny chenille, fritz and marabou were in evidence, fairly typical of lots of stillwater fly boxes that have been filled with cheap commercially tied flies made to attract anglers more than fish.

I asked him if he'd ever tried tying his own flies as this might improve his fishing. "No mate, I get's these from a bloke who sells 'em down the market - a tidy bargain they were, I couldn't make 'em for the same money". I hesitated to point out that he'd paid good money for his day ticket, for petrol together with his breakfast fry-up in the cafe and as yet he had no fish to show for it, so saving a few quid buying cheap flies maybe wasn't such a great investment strategy.

Catching a fish on a fly you've made yourself is one of the great pleasures of fly fishing and it's not necessary to spend a lot of money or have a bench full of tying materials and equipment to achieve it (although that can be the consequence of developing a tying habit, so be warned). It's perfectly possible to make a good fly that will catch more fish than a gaudy lure without using thread or a fly vice. Buzzer and nymph patterns incorporating glass or plastic beads have been around for a long time and a few embroidery beads threaded and superglued onto a hook will make a perfectly serviceable fly.

Recently I was in my local tackle shop buying some hooks for tying carp flies and while browsing the racks of accessories by the hooks I came across some tiny moulded silicone stopper beads. The olive coloured beads are pear shaped and seemed like they could be a good material to form a fly body. The beads are called Diffusion Camo Teardrops, are made by Nash and come in 3mm and 5mm sizes; I've used the 3mm size. The beads are easily threaded onto different sizes of fly hooks to quickly build translucent segmented bodies and provided the last bead sits at the end of the hook shank and is held in place by the bend of the hook they don't even need any superglue to secure them. They give a more naturalistic look than glass or hard plastic beads and may have the added advantage that the soft polymer gives a more natural feel when taken by a trout; the body is slightly 'squishy', which may make a difference to fussy fish. 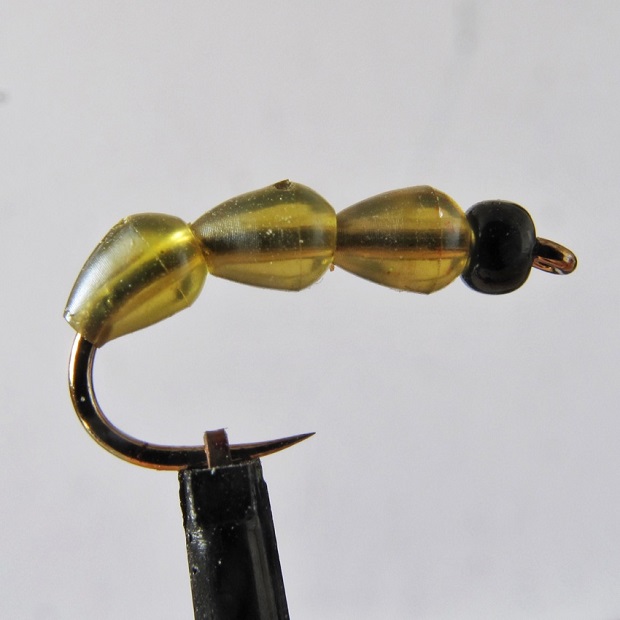 The basic No-Tie pattern uses a single black glass embroidery bead threaded onto the hook for a head followed by silicone beads to make the body. That's it, no thread, no other materials and no glue or varnish. The example shown here is tied on a size 12 hook and three beads fit nicely along the shank and just around the bend, for smaller hook sizes I use two beads.

I've made a couple of variants on the basic design using the simplest tying techniques and can be easily tied 'in-hand' without the need for a fly vice. The first substitutes a small dubbed thorax for the glass bead head. The easiest way to do this is to thread on the body beads and then pull them back from the eye to leave a small space. Run on a few turns of thread, apply the dubbing and take a couple of turns and whip finish at the eye. Pick out the dubbing with a needle or velcro and then push the beads forward up against the dubbing. In the fly below I coloured the hook shank red with a permanent marker pen before pushing on the beads. The ink has diffused into the beads giving a nice effect when viewed against the light. 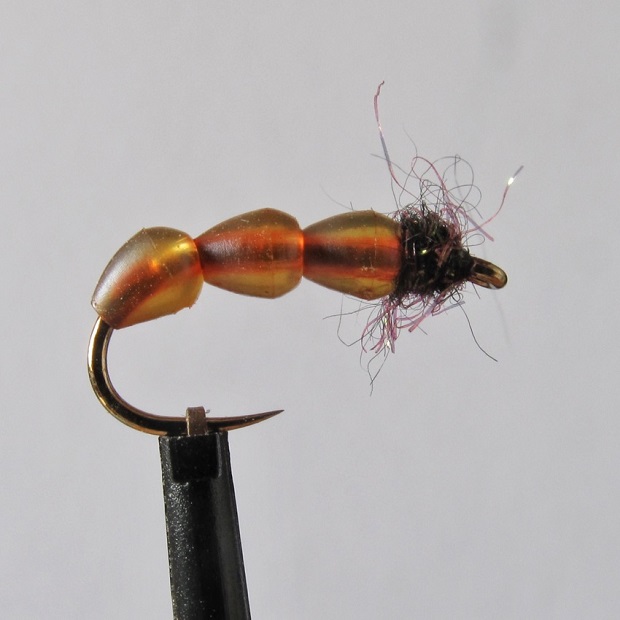 The second variant is a spider pattern with a hackle of two turns of partridge feather. The tying method is similar to the dubbed version; slide on the beads, catch on the thread and the tip of the feather at the same time, make the hackle turns and whip finish. Push the beads forward to splay the hackle fibres. This version can be tied on small hooks using a single bead and a sparse hackle to give an effective pattern for small streams. 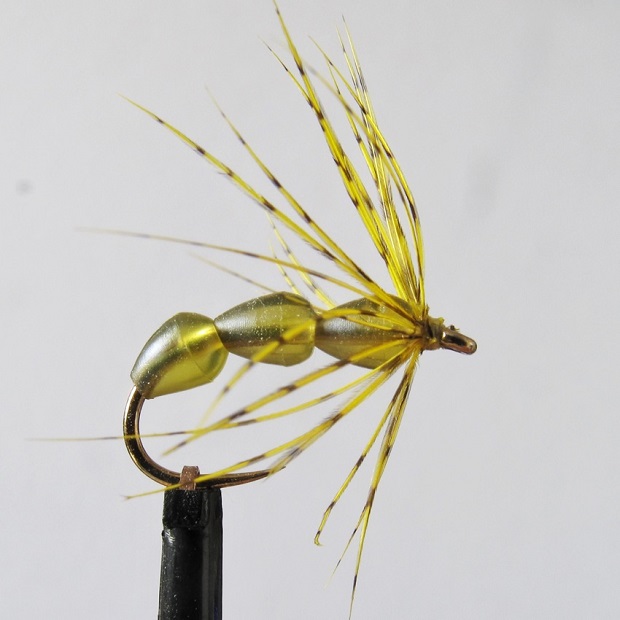 These three variants give suggestions of different stages of development of buzzers and other insect life and sink at different rates, so with no tying or minimal tying steps you can have a simple set of flies that can be used through the year in a variety of fishing situations. And you won't need to keep your Polaroids on when you open your fly box.

Lots of people don't believe that you can catch fish on a fly that's as easy to make and as simple in appearance as a No-Tie. If you are in doubt then this big Garnffrwd brown thought otherwise on Boxing Day afternoon.