Kris Kent looks at the days when not everything goes to plan. Does it really matter though?

Benjamin Franklin said in 1789 that “in this world nothing can be said to be certain, except death and taxes.” Benjamin was obviously not an angler, if he had been he would have included ‘blanking’. If you go fishing from time to time you will blank, it’s inevitable. But whilst it may be inevitable that doesn’t mean it is a wasted trip.  Blanking can be a useful aspect of angling. 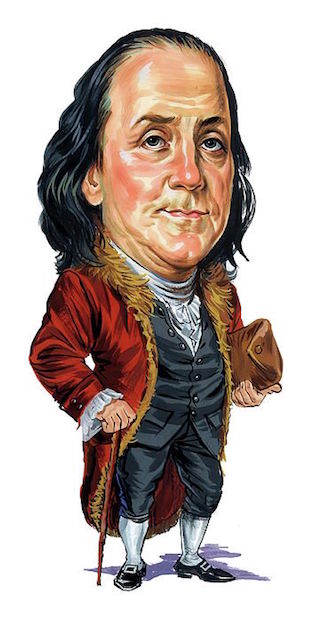 My attitude to blanking has changed as I have got older. When I was a kid dad used to drag me off fishing most weekends during the coarse season. We would set off before first light and set up our kit next to a muddy pond in the middle of nowhere.  The middle of nowhere because we were probably poaching. Dad wasn’t much for paying for things.  From time to time we might catch a nice tench or a hard fighting carp but mostly we just sat and drank tea and got cold. Dad would make sandwiches from medium sliced white bread that tasted of nothing but doubled up as surface bait. 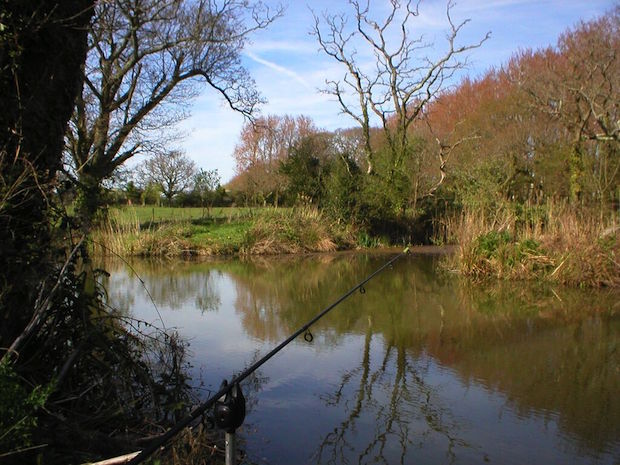 When we packed up and headed home empty handed dad would seem quite happy.  As a kid who thought the idea was to catch fish I left feeling disappointed and frustrated. I realise in hindsight that dad was happy because for him it wasn’t about catching fish, that was a bonus.  For dad fishing was about getting away from the worries of life and my mum for a few hours; a little bit of  "me" time. I find that the older I get the less important the catching becomes. Don’t get me wrong I love catching beautiful wild brown trout and grayling. But I’ve come to realise that fishing can be as much about the company, the surroundings, the experience.

Sometimes blanking comes as no surprise. There are days that have ‘blank’ written all over them. It is high summer and you arrive at the river to find it on its bones. The sun shines down brightly on the stagnant pools. Nothing is hatching and nothing is rising.  The fish are sitting on the bottom doggo. You cast because it took you an hour to get to the beat and you don’t want to waste the opportunity, but you have no real expectation of catching. You spend long periods sitting on a bench watching the water in hope of a rise and stare in to your fly box in search of the magic fly that will stir the fish into action. You drink coffee and perhaps smoke a cigarette. You bump into another angler who is also struggling and chat despondently about the river and the conditions. You hang on into the evening in hope of an evening rise or for a few caddis to elicit a response but it never happens. Eventually you trudge back to the car and pack up disheartened. 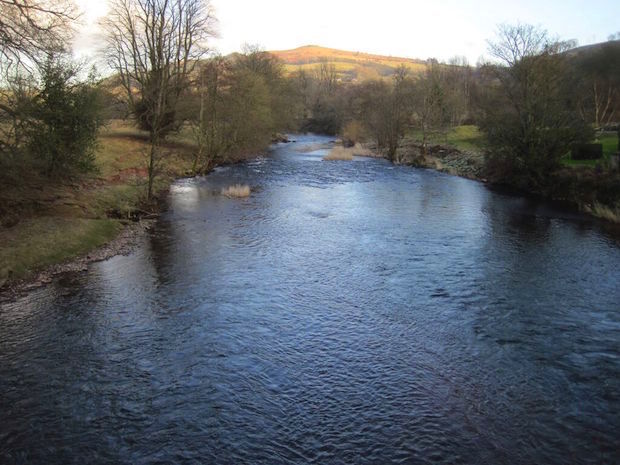 Sometimes you blank despite everything seeming perfect. Impatient for the start of the season I went with a friend to fish the Usk at Penpont. The Welsh rivers open a few weeks earlier than my local patch. The previous year I had done the same but on a different beat and arrived to find the river in almost full spate. I did well to manage a couple of trout on a heavy nymph. This year we arrived to find the river in almost perfect condition. The dry winter meant the river was easing along at early summer level, gin clear. The weather was unseasonably nice, warm with a slight overcast and light breezes. As we wandered down to the bridge at the bottom of the beat we could see large dark olives and March browns hatching off, fluttering upstream heading for cover. There was nothing showing on the section above the bridge so I started nymphing the fast run on the opposite bank whilst Denise headed upstream to fish a flatter pool. Nothing bothered my flies so I wandered up to see how Denise was doing. She hadn’t had anything either. 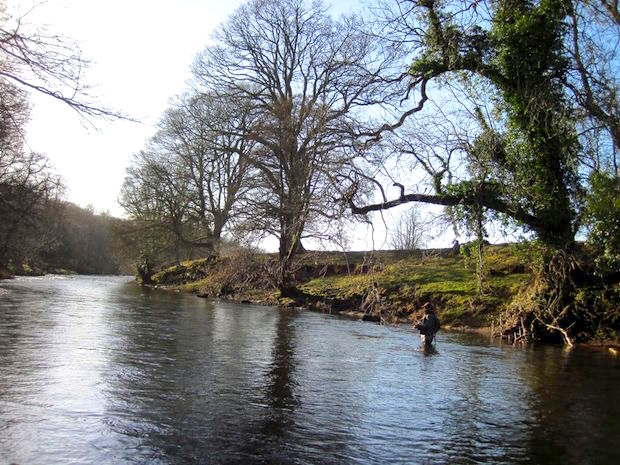 Denise on the Usk

As we wandered upstream each pool, riffle and run looked perfect. The hatch was building with more and more duns riding the surface.  But we didn’t see a single fish rise. We tried various dry flies, we tried emergers, we tried nymphs, we tried spiders.  We tried combinations of all the previous but nothing elicited a response. I took to searching the water with a Klink & Dink rig. A small generic nymph fished under a large Klinkhammer. I worked the water thoroughly covering every run methodically, tossing the flies behind every rock and into every spot that should hold a fish. As we approached the bridge I was starting to feel despondent. I looked up as a dipper shot by low over the water and when I looked back I couldn’t see the Klink. I lifted the rod and I briefly felt the trout on the end of the line and then it was gone. My spirits were raised thinking the fish were coming on but that was the only fish of the day.  We stood on the bridge looking downstream on our way back to the car. We didn’t really say anything but I think we were both asking ourselves what had gone wrong? Such a promising day. 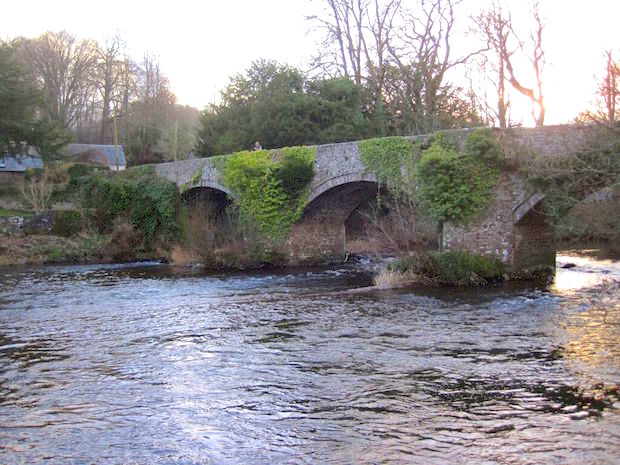 Sometimes blanking is inevitable. Conditions are so against you that to catch would be a miracle.  Sometimes blanking is no one’s fault but your own. I occasionally volunteer to host anglers on one of my regular rivers, show them the river and give them a nice lunch. On one occasion I was looking after a gentleman who mostly fished stillwaters and the more famous chalkstreams. He approached the river standing bolt upright, stood right at the river's edge and boldly cast with the rod held high over his head.  Numerous false casts were made before he extended a long line out across the river thumping his fly down onto the surface close to the far bank. As he did this I watched every fish in the near vicinity head for cover. He did this all day long and as he packed up his gear at the end of the day he looked at me disappointedly as if I was to blame for his lack of success. On another occasion I fished a northern river with a gentleman who insisted on fishing downstream. He cast across and down keeping his rod low twitching the fly back to him as it swept across the current. I’m sure this is a deadly technique for Salmon or Sea Trout but there are neither in this particular river. 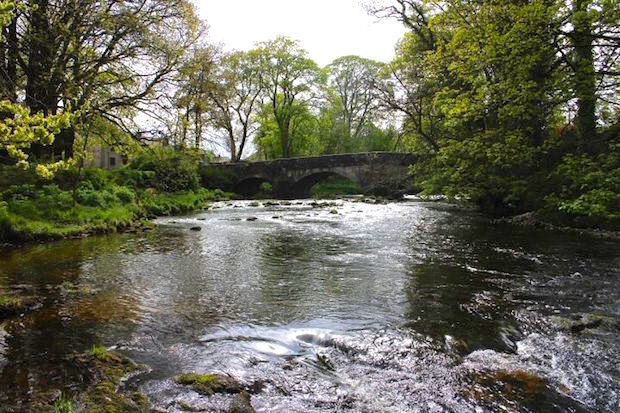 When the fishing is easy you don’t have to work too hard or think too much. I’ve only once experienced what is sometimes referred to as ‘duffers’ fortnight. Where the mayfly are so plentiful that the fish will rise to anything. I spent the entire day fishing the same method, using the same fly. Never once did I have to question my approach or review my fly selection. Whilst it is nice from time to time to catch lots of fish I left the river dissatisfied. It was too easy. Blanking forces you to work and to think. That day on the Usk at Penpont I left the river with my metaphorical creel empty but  whilst I was frustrated by our lack of success I left feeling that I had tried my hardest. I had worked the river fishing every pool, run and riffle diligently searching every nook and cranny. I had changed my flies frequently, adapting my approach and drawing upon every technique and weapon in my arsenal. I had thought long and hard about the conditions, the fly life, the fish and my approach. As a result I had learnt a lot about fishing and about myself in the bargain. I was a better angler as a result. 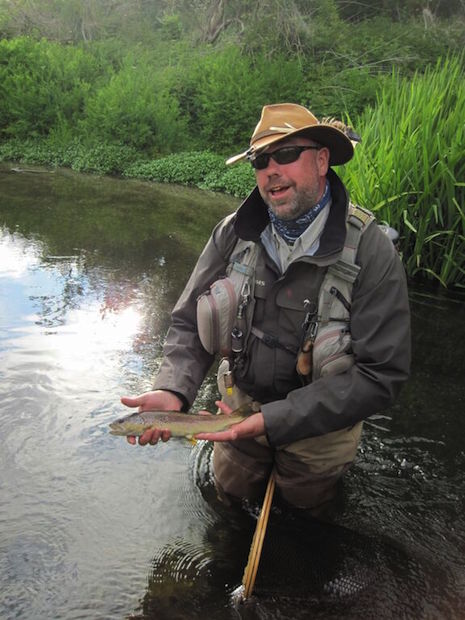 Wild brown trout on the mayfly

Whilst I mostly fish solo on occasions I get to share a day with friends. On a recent trip up north I was lucky enough to fish a private beat on the Hodder with my friend Paul. Paul had a couple of small trout on dry fly but I failed to catch anything despite there being a few rising fish. But I had a wonderful day. It is always a pleasure to explore a new river, especially one that is very different to your normal rivers. It was classic upland fishing with a succession of long slow glides, deep pools, shallow riffles and fast rapids. There were a few fish rising in one of the deeper pools and whilst I couldn’t tempt them with my fly selection I managed to get Paul into a couple of nice fish. 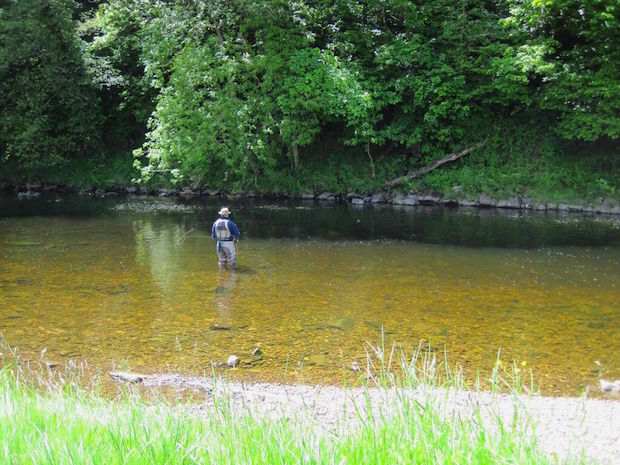 Mid afternoon we started to run out of steam and so we retired to a perfectly sited bench. It was perched on a high bank looking down onto an inviting run, shaded by a large tree. We sat, for probably a little too long, and chewed the fat. Turning the day over and over in conversation, picking it apart and analysing our relative lack of success. We watched the river slip by low and clear hoping for a hatch that never happened. 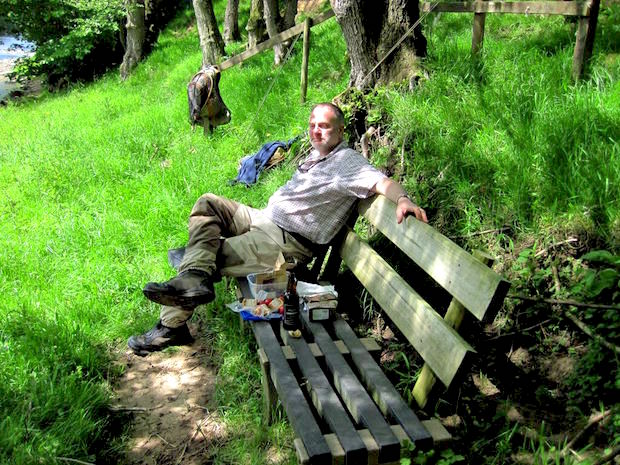 Paul brought a sumptuous packed lunch. Butcher's chicken and ham pie, pork scratchings, tomatoes, rich fruit cake all washed down with a couple of bottles of proper ale. By the end of it our appetite was sated even if our desire to catch fish wasn’t. We wandered the last few pools back to the bridge and had a final coffee sitting on the river bank before retreating to the cars. Tough fishing but great company. 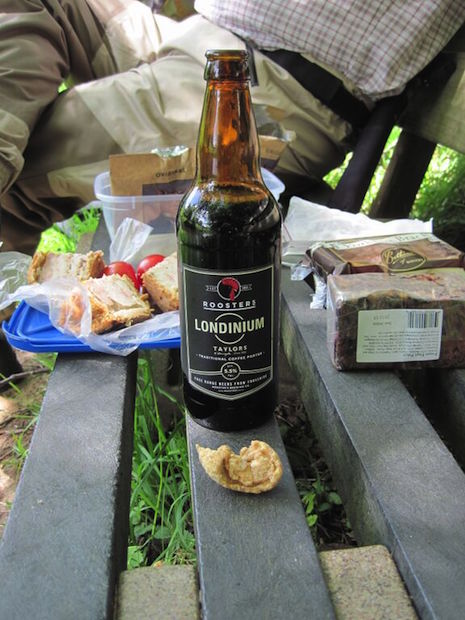 If you can walk away from a river having tried your hardest, but having failed, and be able to hold your head high and reflect on the experience positively then you are better person, and probably a better angler, than when you started.