Research states that the black fly (order Diptera, family Simuliidae) may be as important a food as baetis (considered to be the most dominant food) for trout and grayling yet we see little comment on it and yet they are prevalent in all streams that hold trout around the world. 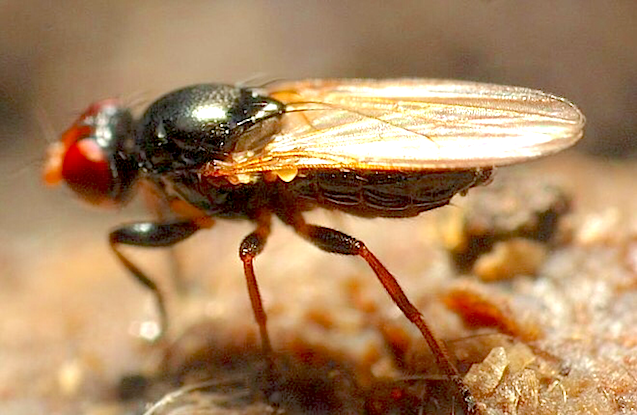 There is a staggering amount of information about Simuliidae yet they are largely overlooked by fly fishers. Why is that?

Consider this. There have been over a hundred studies that showed that black fly to be more important than even Baetis as a trout food. Yet we fly fishers haven’t really honed in on it. In a study by Dr J. David Allen (a prominent US stream ecologist) it was established that black flies were consumed by trout at a much higher rate than the proportion of other food in the drift (the amount of food available to trout drifting in the water). While Simuliidae composed only about 10% of the food they made nearly 70% of the trouts' diet.

If that doesn’t interest you then consider that on that same stream Baetis, the supreme focus of fly fishers, made up 70% of the drift but only 20% of trout food.

Malcolm Greehalgh and Denys Ovenden, in their publication “The Fly-Fishers Handbook- 1998” state that “Reed Smuts (known as Simuliidae) are abundant in rivers, especially fast flowing clean rivers” and our rivers are becoming cleaner now that pollution is being attacked.

So why haven’t we focussed on trying to understand and imitate this important food more deeply? I think there are two main reasons. The first is that larvae and pupae do not show up in river insect sampling in sufficient numbers to warrant our interest. This is because they are extremely difficult to dislodge from the river bed. The second is that these flies emerge ready to fly and do not sit on the surface waiting to dry before flying off. So we as anglers may never even realise that they are hatching. Added to this is that the fish feed on them BEFORE they leave the water, not on the surface as they do for other insects. Not seeing the hatch means we miss the importance and hence don’t see them as an important part of the food chain of both trout and grayling.

But we haven’t entirely missed it. Who hasn’t been plagued by the “black curse” or smutting feeders or gnats etc.? Who hasn’t tied up Griffith Gnats, IOBOs and other small flies trying to catch those frustrating sipping fish? The reality might be that our successes are mere chances or the fish are feeding on something different.

So what are black flies or reed smuts as we anglers like to name them?

There is no doubt that the fish probably feed on them at all stages in theirlife cycle. The larvae, about 10mm long, are shaped a bit like a club. That is the bottom portion bulges. They attach themselves to rocks or weeds using hooks on their posterior and feed through small fans trapping food at the top. They are probably fed on by fish in this stage but are difficult to imitate as they largely stay put.

The pupae stage may offer some opportunity to us fly fishers though. Unlike other insects, Simuliidae do not migrate to pupate. They simply do it where they are building a cocoon that is attached by a thread. This period lasts for about a week and would be prime targets for foraging trout and grayling.

But it is the adult and its emergence that offers the most interest to us.

When the adult emerges from its cocoon a unique and fascinating sequence of events occur. Fully formed adults burst from the cocoon encased in a bubble of air. They rise rapidly to the surface, not drifting very far, arriving at the surface ready to fly off. Depending on conditions, there may be a very minute delay as they try and burst through the surface. This small bubble of air is a sure trigger point for the fish and needs to be imitated for any success. Another intriguing thing is that these adults have red eyes which may also be another  small trigger point.

Given that research suggests that Simuliidae form such a prominent part of the trout's food chain then it is most likely that these adults, trapped in a bubble of air, are fed on voraciously as they rise to the surface. Perhaps those micro sipping rises we so often see fish feeding on the adult, just under the surface, as it tries to burst through the meniscus on the water surface.

The flies I use have been developed to suggest both the rising adult and one trapped fleetingly under the surface.

I fish this on the point. The pattern uses a size 18 dry fly hook with a good gape and with a lead wire wrapping. The body is tightly dubbed black Swiss CDC dubbing. The under wing is UTC Mirage Opal Tinsel, doubled and laid along the body. The wings are two Black CDC feathers tied as wonder wings to just behind the body and tied in after the eyes. The eyes are a piece of red 8lb mono clipped tight against the head of the fly. 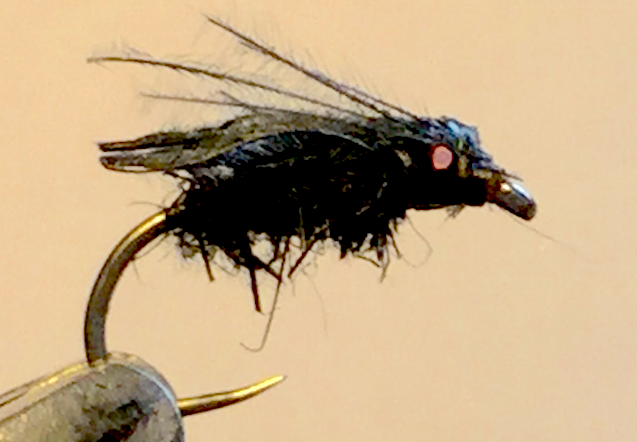 There is a case for using white CDC for the wings as the naturals wings are clear. But I want this fly to sink and attract air bubbles which I think will show up the “silver” effect much better.

I fish this on a dropper or attached right onto the tippet about 50cm above the point fly. For this pattern I use a Kamasan B525 (as I use for all of my spiders) size 18 but you could use any hook. The thread is black and is only used to fasten the body, hackle and form the head. The body is UTC Mirage Opal Tinsel tied over the hook without any thread underneath. 3-4 layers are applied to give a bulbous effect.the hackle is two turns of a starling back feather. 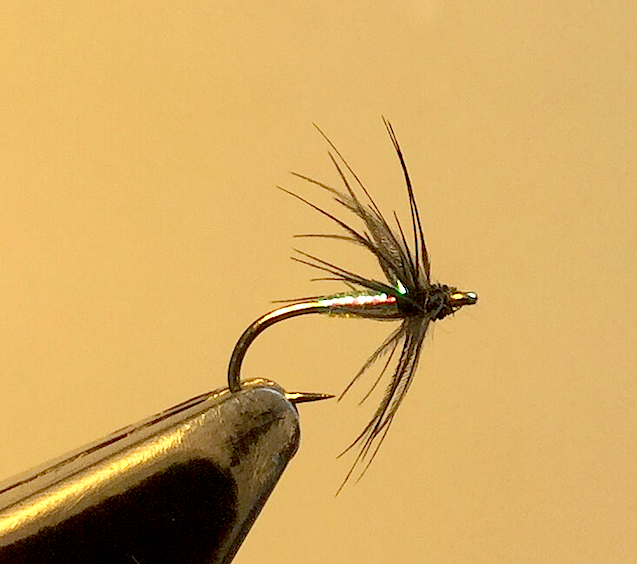 As Simuliidae predominately hatch early in the day, I fish them in the mornings. They love fast water so my prime target area is right at the back of fast water and as it begins to flatten out into pools. However, this also includes flat faster water where there are rocks with weed attached to them. I don’t ‘swing’ the flies because they rise so fast and I want to get as natural a drift as possible.

I hope you have enjoyed this article. There is enormous scope for us to develop other patterns and techniques to try and imitate this little known and important trout and grayling food.