Kris Kent checks out some new water. Is it what he hoped it would be? Read on

It’s strange how your brain can filter out unimportant information. I was standing with my back to the M3 and yet I wasn’t aware of the road noise at all. Why? Because I was intently watching a large grayling, on the fin, feeding actively on nymphs. As I watched it swayed from side to side intercepting the tiny invertebrates, invisible to me, its gills flaring as it sucked them in. It was at least a pound and might have pushed two. I’m a terrible judge of fish size. 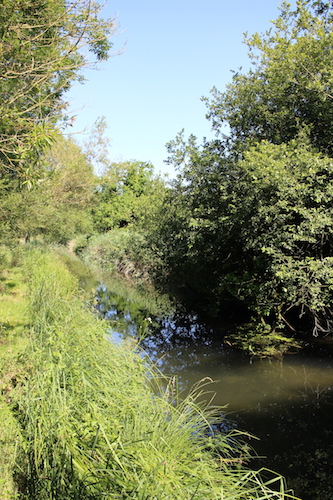 Here be the big grayling

I first became aware of this beat on the Itchen Carrier near Easton when Ed Marsh dropped the Wild Trout Trust an email back in April. He was keen to get more people fishing his beat and wondered if the WTT could help. I popped something up on social media and added it to the information sheet we hand out at Orvis in Stockbridge. In one of those small world moments, a few months later Gavin and Oscar from Glorious Game mentioned that they were letting the beat on Ed’s behalf. They also asked if I would fancy fishing it some time with a view to me using it for Chalk Stream Dream’s clients. Curious to know what it was like I took them up on their offer this June. 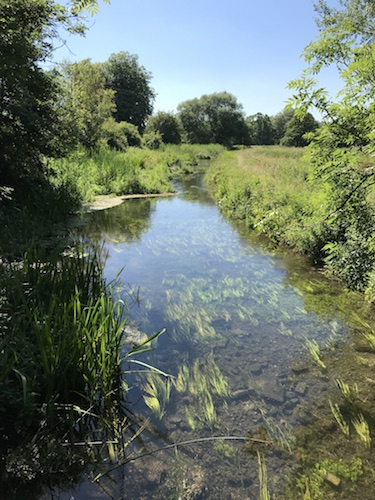 First glimpse of the Itchen Carrier at Easton

It was just my luck that as my day approached a high-pressure system settled over the UK and temperatures started to soar. As I turned on to Church Lane at Easton the temperature gauge in the car read 30ºc.  There was not a cloud in the sky and not a breath of wind. I started sweating just thinking about how hot it was going to be. Deciding to bide my time I spent the first couple of hours walking the banks and familiarising myself with the water whilst I waited for the temperature to abate. Finding a shady spot overlooking the river with a handy bench I settled down to enjoy a hearty lunch. I hoped it would keep me going well into the gloaming. 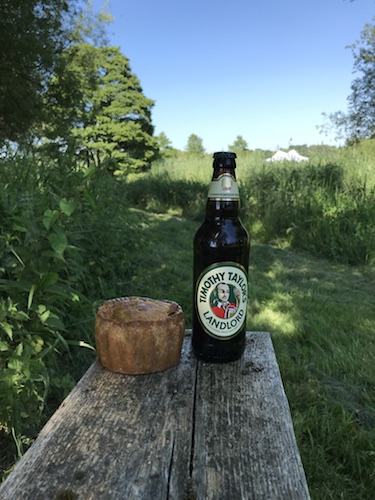 I’ve fished the Itchen and its carriers on many occasions. This carrier leaves the main river below Easton and re-joins it on the other side of the M3. It is narrow, progressing between banks of willow and reed, surrounded by fields of rough pasture. It meanders gently, sometimes shallow and fast, sometimes deeper and slow. As I wandered I spotted and spooked lots of fish, mostly small wild trout but with the occasional larger brownie and grayling holding in the deeper water. It was right at the bottom of the beat that I spotted the big grayling hard on the feed. The sun was starting to dip in the sky and, whilst it was still hot as hell, it felt like it was time to put up a rod. 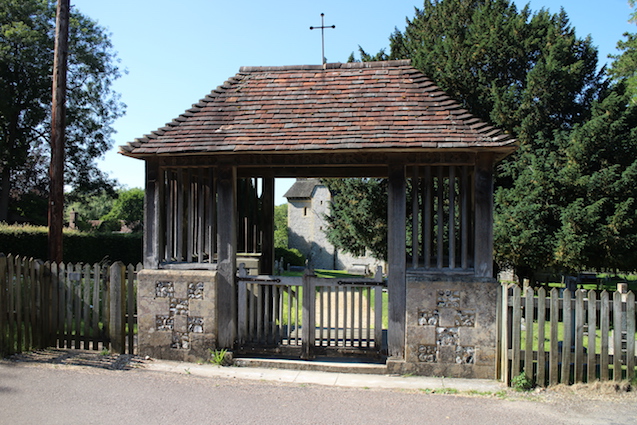 The lychgate to Saint Mary's at Easton

I’d parked under the trees by the lychgate to Saint Mary’s Church. Even so it was like an oven in my boot. The rod tube was almost too hot to touch. Rod choice is always tricky, when you’ve got too many rods. I settled on a softer-actioned Helios 2 8’4” 3 weight rod. Long enough to reach over the reeds but not too long for the slender river and tighter spots. The softer action would mean I could easily roll cast and shoot line where overhead casts were out of the question but with enough strength in the butt to bully fish away from the roots and overhangs. I added a Luke Bannister Super Delicate 4’ furled leader to the end of the Orvis Superfine fly line and added another 5’ of tippet. Fly choice would wait till I got back to the water.

Easton is a picture-postcard village with fine houses lining Church Lane; I felt somewhat envious as I followed the footpath back to the river. My plan was to walk back to the bottom of the beat and catch the big grayling before fishing back upstream, getting back to the bridge for last light. Unfortunately, my plan was ruined when I got to the bridge and found fish rising, too good to walk past. To avoid spooking the fish I walked through the adjacent field and then jumped the fence to get back on the path. As I leaned on the top strand of barbed wire the staple in the rotten fence post gave and I crashed forward. I ended up with my pack entangled in the wire, a large rip in my trouser and one barb dangerously close to my knackers. One false move and it might end badly. I very carefully extricated myself without further damage but as I picked up my rod I realised that the barbed wire had sliced open my thumb.  Blood was pouring down my hand and I suddenly felt rather faint. Sitting on the bank I gathered myself and made an impromptu bandage. As I recovered I soaked up the view of Easton looking down on the river. 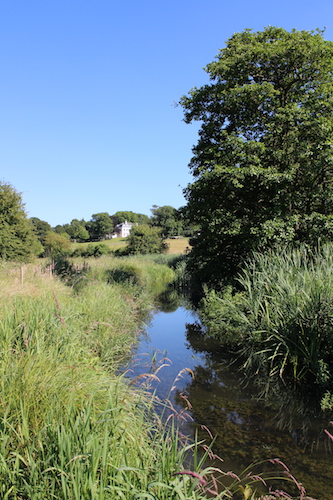 A fine view back towards Easton

Despite all the noise and crashing about the fish were, miraculously, still rising. I cast as delicately as I could and covered them well but they didn’t like my small Olive Dun pattern. I tried a Double Badger and an Olive Emerger, they didn’t like those either, so I moved on.

The big grayling was still there when I reached the bottom of the beat, so I switched to a small nymph. I flicked it upstream above the fish and watched the fly as it sank back down towards it. As I watched a smaller grayling shot out and grabbed the fly. It was nice to have a fish under my belt, but I was disappointed it wasn’t the larger fish. The bigger grayling was still there so I changed pattern and repeated the process. The fish ignored my offering but as I lifted off an unseen grayling grabbed the fly and dashed around the pool spooking my original target. Time to move on again. 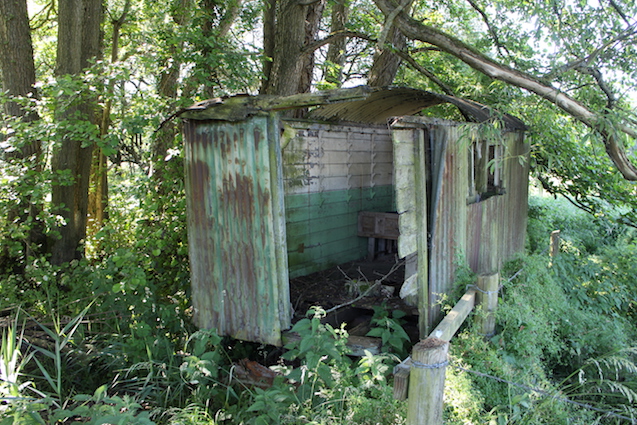 Just before the old hut I spotted a fish nymphing along a narrow run fringed by willows. The fish disappeared from sight, so I cast blind. As the fly passed where I though the fish would be I raised the rod tip to induce a take and everything went solid. As I raised the rod the fish burrowed itself into the willow roots and after a moment the line went slack. Slumping back on the bank disappointed I verbally kicked myself, but on reflection there wasn’t anything I could have done differently, was there?

I walked slowly back scanning the water for rises but nothing much stirred. There were still a few mayfly spinners around that elicited slashy rises but when I covered the spots they wouldn’t come up for my imitation. Nearing the bridge I spotted a swirl on the bend, and then another. It was getting late and I wondered if there were a few spinners falling so I tied on a Drop Arse Spinner pattern. Second cast and the final fish of the day, a beautiful wild brown trout, sucked in the fly. 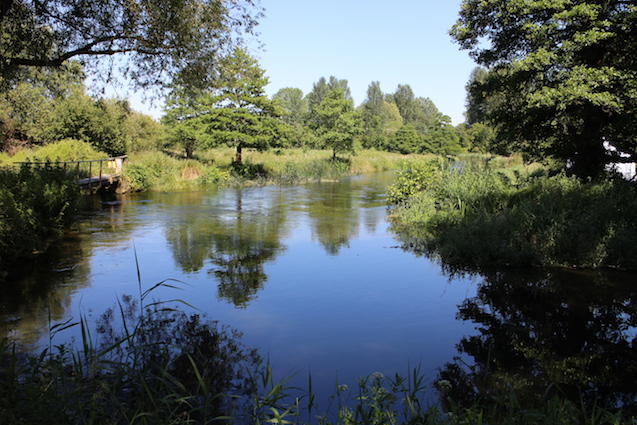 Top of the beat

Approaching the top of the beat there were a few fish moving, I suspect to small sedge, but I couldn’t find a pattern they would accept. As I turned to head back the tower of Saint Mary's loomed over the river lit up by a bright moon. 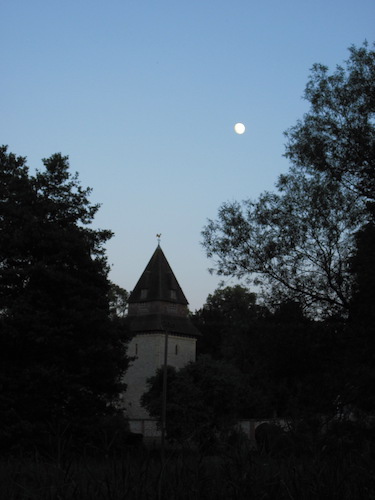 Tired and bloodied I walked back up the hill to Saint Mary's. The heat was still heavy on the air and I smelt of sweat.  I fancied a pint to celebrate a wonderfully eventful evening, but I wasn’t sure I would be good company. So I headed home instead hoping that I would have another opportunity to visit this lovely little beat sometime soon.

If you would like to fish this little bit of paradise contact Gavin or Oscar at Glorious Game: