Richard Branson hasn’t got us to the moon yet, but for the next best thing I’d head to the lunar wilderness of Sutherland in the far north-west reaches of Scotland. The landscape is like nothing else in these islands, a majestic bleakness where knuckles of grey, fissured gneiss bubble up through the windswept grass and heather. There is water – a lot of water: hundreds of lochs, some huge, many tiny and all sizes in between. And there are trout. For the hardy fly fisherman who doesn’t mind a gruelling hike into the hills it pulls you like a magnet. If you go once, you will be drawn back again and again.

I’ve been going to the Scourie Hotel for some 15 years now and have still only fished a fraction of the waters that the hotel controls. And so I was up again this year for four days of hard fishing, determined to land one of the monster trout that are known to lurk in some of the smaller lochans. 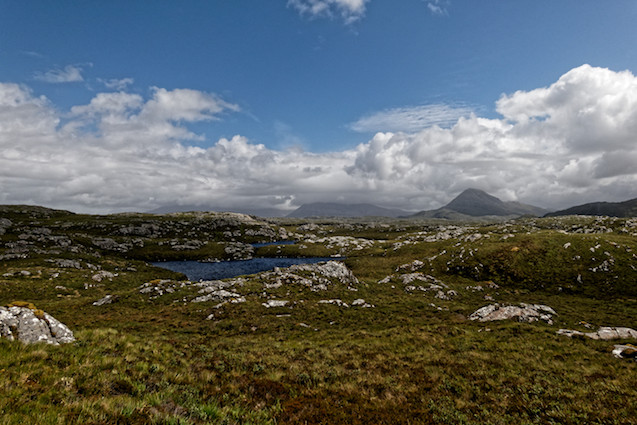 The hotel runs around 40 named beats, each generally consisting of a larger loch surrounded by a smattering of satellite lochans. To give the fishing guests a fair crack of the whip – some beats are more popular than others – the hotel runs its famous ‘boardmaster’ system. When you arrive you put your name at the bottom of the list on a blackboard in the lounge. After dinner the boardmaster, a knowledgeable guest who has volunteered for the role, works his way down the list of names with the guests choosing their beat in turn. The following day the name at the top of the list is put at the bottom and everyone moves  up a space. So as the week progresses you find yourself rising up the board. It’s a fair system that has stood the test of time.

This year, despite being at the bottom of the board on the first night, I managed to bag one of my favourite beats, Sedgewick’s. It’s a fair slog into the hills – maybe half an hour of steep climbing – but you are rewarded by a couple of dozen small lochans, many of which contain good fish.

Unfortunately the wind was howling with gusts of up to 50mph, which made things tricky, verging towards somewhat hazardous. I tackled up my Chas Burns 10ft 5wt with an 18ft leader and put a large, well-hackled emerger on the end tied with a meaty foam ball wing to keep it aloft. Over the years I’ve abandoned the traditional three-fly cast for a single dry fly that will create an enticing wake as you twitch it across the water’s surface. Anyhow, it was a struggle trying to cast while being buffeted by the savage wind. In the end I managed four beautiful small trout.

On day two it was up to one of the big-fish beats, Mid-chain. The hotel’s walls are festooned with fish in glass cases and many of the 4 and 5 pounders have come from this beat. Last year I had a personal best with a two-and-a-quarter pounder, a bit of a Charles Atlas lookalike, rather broad in the beam but narrow in the waist.

It’s  good hour’s march through rough terrain, and I headed towards the same lochan that had produced that fish. It has a sodden, soft bankside, hence it’s name Quaky Banks. 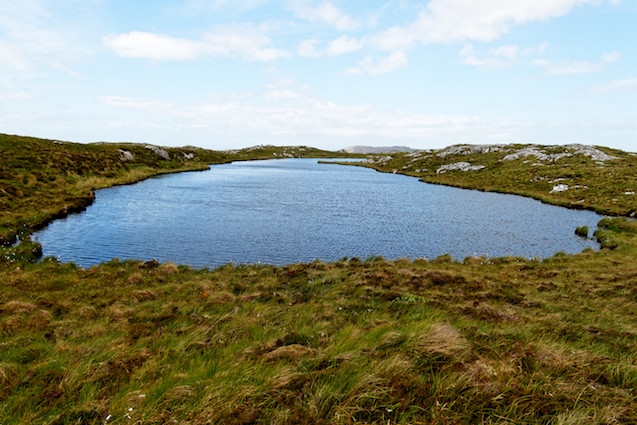 I crept up on hands and knees – stealth is essential – and cast while I was still ten yards from the bank; the idea was to drop the fly about a foot from the bankside. Annoyingly I was a bit short and the fly hooked  into a sprig of heather three inches from the bank. So much for that plan. Cursing quietly I retrieved the fly and then saw a huge, black shape rise in the water and disappear a few feet to my left. With heart thumping I covered the rise but nothing doing. I fished the lochan for another half hour, spotting and covering another couple of big rises, but the fish were too canny today. A couple of hours later and three or four lochans in I had a pull and brought out a beautifully coloured brown of around 12 oz:

The third day of my trip took me to the Crocach beat, a large, convoluted loch with three or four little satellites known to contain big fish; one of 6lb was taken out a couple of years ago. Sadly nothing came to my fly on the small ponds, although I did prick one, so I had a crack at the big loch, confident I’d pick up at least a couple of small fish:

No such luck, and today I blanked for the first time up here in many years. C’est la vie.

For my last day I got the Mhuirt beat, which has a famous little pond high in the hills called McKay’s. It’s a small water, maybe 80 yards long by 40 wide, but is crystal clear and very deep and holds some big fish. 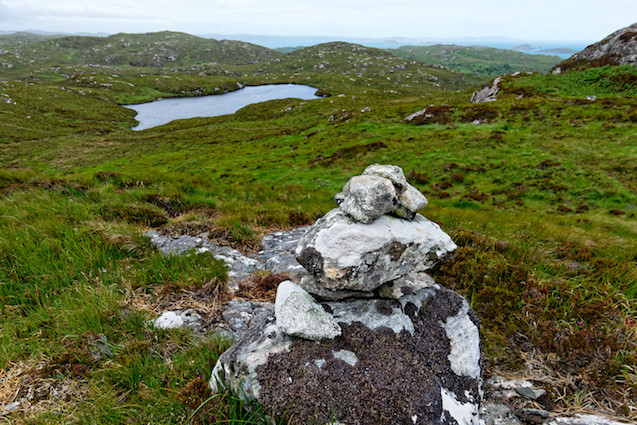 As I approached the water I abandoned my rucksack to give me a lower profile and snuck up in a crouching position. I started to cover the water as systematically as the brisk tail-wind would allow, working the fly along the margins and then as far into the middle as best as I could manage. About a third of the way along there was a sudden swirl at the fly and my rod bent sharply. Thankful that I had detached the landing net from my rucksack and brought it with me I scooped up a fine fish of maybe 2lb:

I turned another decent fish a little further up the lochan but it didn’t connect. So I made my way to other waters and picked  up a handful of smaller fish, making a total of nine for the day. 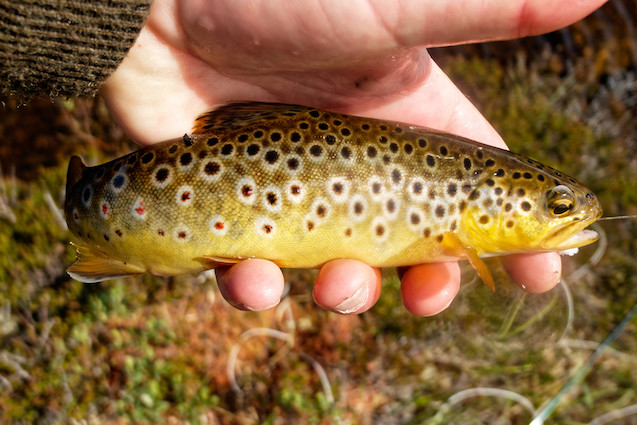 Well, that was it for this year. A lot of hard walking in a stunning landscape and terrific sport. I’ll be back next summer.