Ever since I started fishing Miami has held an enticing possibility for my fly. Especially the miles of canals shimmering with mysterious and exotic species, thriving in the tropical climate. Forest Gump’s chocolate box of fishing: aquatic promises of not knowing what you were going to pull out.

Like many a saltwater fisher destined for an island somewhere in the Caribbean sea, we were passing through Miami. But Tim and I had opted for a couple of day's stopover to help the process of acclimatising to a 20C temperature jump and change of time zones. And to get some fishing in, of course.

The first morning we parked up next to a canal in an urban area of Miami. Perhaps due to it being our opening session of the trip we took time to experiment with flies, retrieves and tactics. In the reasonably clear water it was possible to see that there were fish around, but they were nonchalant to the point of dismissive to our hairy offerings. Despite somehow managing to tempt a scrawny largemouth bass, we struggled to get any other sort of action. 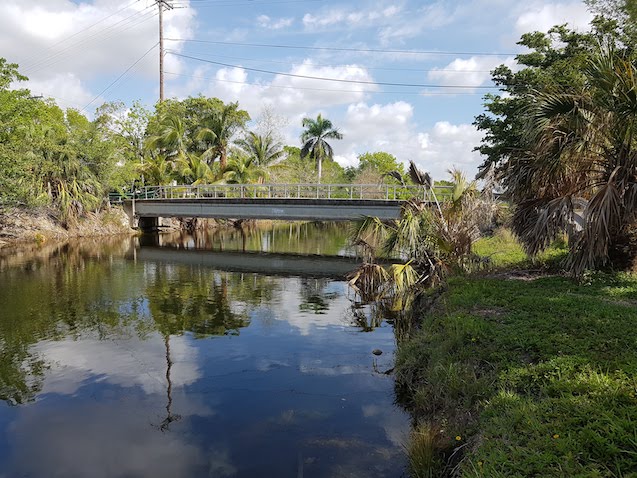 That afternoon we drove out west to the Everglades. Immediately this canal seemed to be more active and alive with fish splashing and topping on the surface. Tim started by spinning some lures and had a couple of Mayan cichlids and a largemouth. I persevered with the fly rod, running through a gamut of offerings including a rage of fry imitations and even a gurgler (at the urging of a local). But I couldn't convert the tail nips into takes, no matter the size or style of the fly.

We moved to a new stretch of the canal where again the water looked alive - not least because of the alligators that would pop up and cruise over to a look at the wand wafting weirdos on the bank. This stretch of the canal was marked by lily pads and weeds, so a lure version of high sticking evolved as the best method. Where the lily pads permitted I put in short casts of 10-20ft to let the fly sink before then slowly drawing in, letting the fly dangle on the hang. 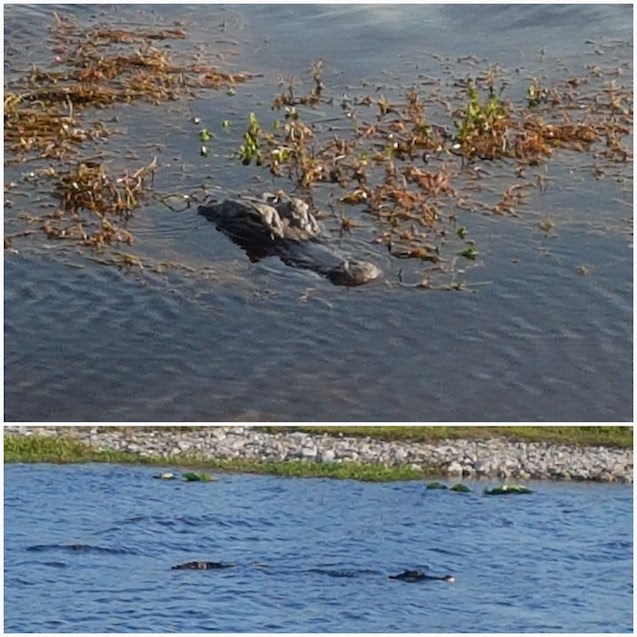 Perhaps it was the change of tactics or the day starting to cool. But we started to get takes from what seemed to be every predator in the water (although thankfully not the 'gaters). I landed a largemouth bass, various “exotics”, and a chain pickerel (Esox niger) a cousin of the northern pike that left me wondering where in the world I was. But I also got hits off a snakehead and briefly did battle with an alligator gar.

As dusk settled I'd tied on a sparkle clouser, which I thought would entice something special in the evening light. This was almost immediately successful and, after I’d had the first few hits, Tim also got his fly rod out, tied on a sparkle Clouser and was soon landing fish too. As night drew in and we tallied up, we were both well into double figures of fish including almost half a dozen new species. 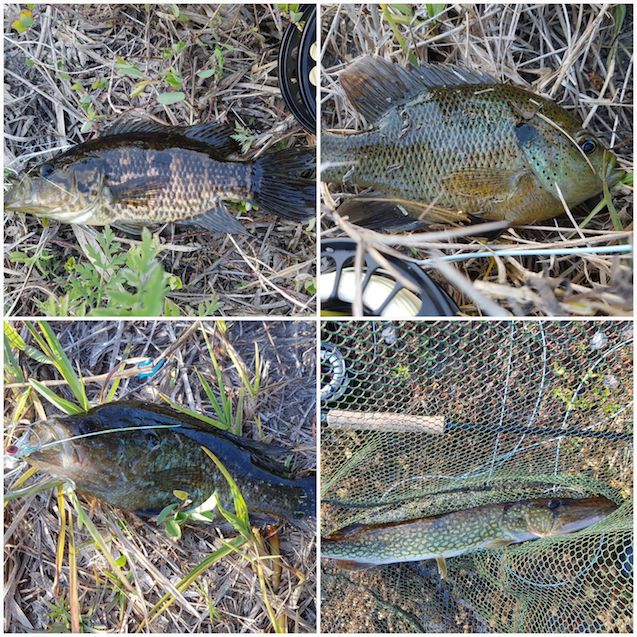 The next day we decided to learn the lesson of the previous morning's struggles and head out to the 'glades once more, but this time south to a canal closer to the sea. There we were greeted by a wider body of water that again was reasonably clear and very fishy looking. Initially we fished the sea side of a large lock, but other than some lackadaisical baby barracuda we were unable to get to get anything to commit.

After an hour or so we headed north of the lock, which proved to be one of the best decisions of the trip. Every 20 meters up from the lock we seemed to see more and larger fish. Tim was the first to hook up, by dancing a sparkle Clouser in front of our first peacock bass. Not a monster, but very much welcomed as ‘proof of concept’. From then things started to hot up, literally and piscatorially.

It started with a small cichlid or two, before I got an adrenaline pumping hit from something having casting upstream, parallel to the bank. Closer inspection to where the fly landed revealed three peacock bass, darting in and out from a grassy overhang. I positioned myself so I was able to adopt a lure high stick approach that was so successful the previous evening and again got another tail biting nip, but no hook-up. With the fish remaining unspooked and on station I tied on my variation of the Bullen Mary Special (BMS). Instant success. The peacock shot off, jumped and darted around before it was ably netted by Tim. I couldn't believe it - I'd caught a peacock bass! A quick glory photo and she was released, powering off into the deep.

I did not dare expect it, but I joked with Tim that I'd try the same spot to see if either of the other fish were still present. I flicked the fly in and out shot the bigger of the fish that I'd seen. While the first fish was zippy, this peacock was powerful with lustful runs stripping line off a reel designed for bonefish that was dialled up to full. I was grateful for Tim's calm presence as I coaxed the thumping fish into the net. 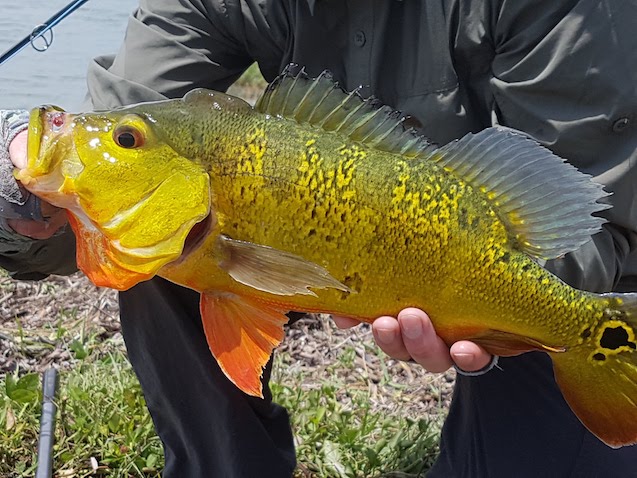 That fish led to a late and long lunch during which we agreed that, as that morning’s canal had provided the most active peacock bass and rewarding fishing, we would return for our final evening session. We agreed to start on the opposite bank to the morning session, hoping for a parallel experience.

Unfortunately as we dined the winds picked up. After a period of frustrating short casting into swirling and blustery winds, which had some causal relationship with me loosing the fly that had caught my two peacocks, I switched banks. Tim, who had seen sense in the switch well before me, had already racked up a dozen or so small Mayan cichlids on a crazy Charlie. I, however, was starting to doubt the wisdom of returning to the location of past glories.

Somewhat frustrated I tied on a larger BMS, noted the lower tide, and cast out 30 feet to get to the deeper water. A long slow draw later and I was on to goodness knew what - but it was scrapping like a good 'un and I was all smiles again. In the net it looked like on of those palm sized cichlids we'd been catching. Only much bigger… 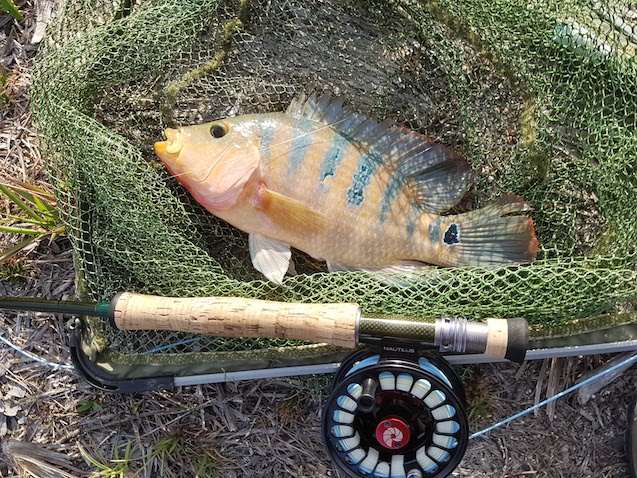 As I caught up with Tim the sun was setting and I put on the sparkle Clouser to see if it could repeat its dusky magic. Almost immediately it resulted in another big cichlid. Repeating the tactic of a long cast 45 degrees (left), possibly downstream, letting the fly sink deep, then long steady draw back, a large peacock followed my fly in, nipped the tail before aborting and diving for the deep. Another cast and this time I was again rewarded with a strong take.

This fish had taken further out than any other and it was clear I was into something a bit special. I again requested Tim's netting skills. "I think this is a big one!" I called out as a large pale shape raced left to right. Again my eight weight was put to work absorbing strong dives to the deeper depths of the canal. Then the fish changed tactics, launching out of the water. "Oh! It's a lump", I said stating the now obvious. Again I was able to back up the bank and guide a strong fighting fish into the waiting net. 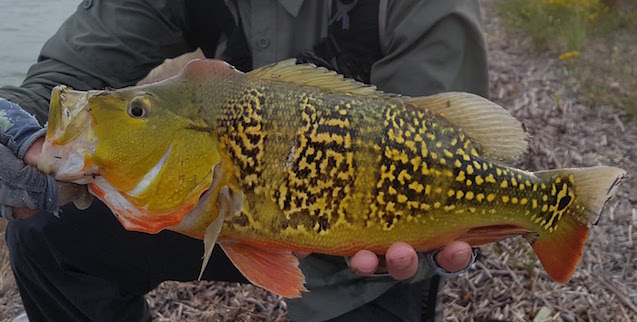 We started at the near iridescent yellow fish nestled in the net. I'd seen photos of bigger, and swore larger fish had raced from the depths to swipe at my fly earlier in the day. But he was a fine example of what peacock bass can look like and was easily big enough to warrant our muted awe. Tim broke the silence, "Let's get on with the photo then, so I can get my fly in the water". Maybe I was being sensitive, but I suspected my lucky streak was starting to get a little irritating. A few quick snaps, a last look, and he slipped off to the darker reaches of the canal.

We fished on, and Tim managed a few takes but no hook-up. I lost another nice fish trying to net it myself, a consequence of being too embarrassed to call on Tim's skills one more time. And with that one that got away, our time fishing Miami’s chocolate box canals was over. 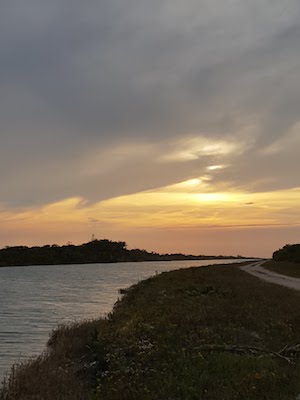 Bio: John MacRose is an amateur but enthusiastic fly fisher and fly tyer who is keen to (try and) catch any fish on the fly. Follow him on Twitter @johnmacrose