It’s not often that I have a blank on the river. From looking through my fishing diary, I reckon maybe one day in twenty. Sometimes it’s because I probably should have stayed at home and not gone fishing on a river that’s too high or too muddy to have a decent chance of a fish. Other days are less explicable; this was one of these. It was a bright day in mid-August. The river had been up and down and running coloured several times in the preceding weeks which tends to put the Taff fish off their feed. However, I'd been out a couple of days before and had a good few grayling and trout. This day I couldn't buy a bite. I'd fished several of my favourite runs, changed flies, changed methods; nothing. It was getting frustrating. 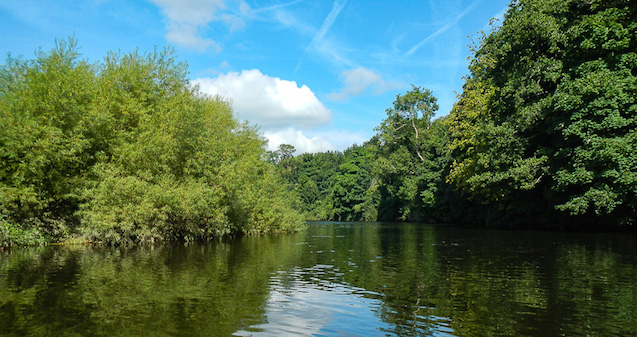 In between abortive attempts at catching fish I did a bit of community service for the river bank regulars. I waded out and retrieved a squeaky plastic rabbit for a nice lady whose dog had dropped its favourite toy in the river and was now whining soulfully, but refusing to go in the water to fetch it. I helped a worried bloke look for his dog that had wandered off the end of a gravel bar into the knotweed jungle. The dog showed up after about ten minutes shaking water all over both of us and wondering what all the fuss was about. You get a certain smugness standing in chest waders next to an owner in shorts and t-shirt who is now soaked to the skin by his pet’s enthusiasm for a morning swim.

I even thought of fishing the pool below the railway bridge which I wouldn't normally go near in the summer. The gravel beach and the proximity to the path through the park makes it a favourite spot for dog walkers to encourage their charges to go for a nice swim. I went anyhow. No dog walkers, just two blokes with a powerboat. Not a full-size job you understand, a radio-controlled model, but a very noisy none the less. I'll give the driver credit, he could steer the thing and was executing some very fancy manoeuvres. I stood and watched for a while, wondering if he would make a mistake and plough it into one of the stone bridge pillars. Maybe he would slip up as he set it charging downstream at full tilt, leave it too late to make the turn back and let it go out of radio range. Then I could offer to retrieve it and claim salvage rights. No such luck. I got fed up of the ear-shattering noise and trudged off upstream. 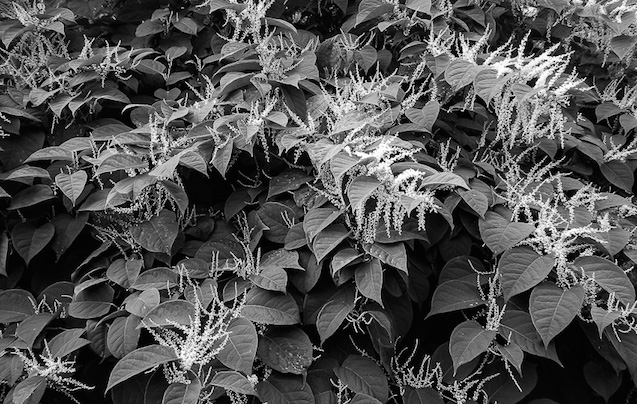 Around lunchtime I battled through the jungle to the edge of one of my favourite winter pools. It doesn't get fished much in the summer as it’s so difficult to get to. Some of the paths that criss-cross the flood plain are kept clear by the regular dog walkers, but the minor paths that are used only by anglers as entry points to the river banks tend to get a tad overgrown. Now we are not talking minor growth here, I mean machete territory. Knotweed, balsam, bracken, bindweed and brambles all grow above head height and need to be trampled or pulled out of the way. All conspire together to catch your waders or rod. Oh, I didn't mention the nettles, did I? Among the towering vegetation are some vicious nettles which you don’t see until you've grabbed a handful of greenery to pull it out of the way. You only realise your mistake a second or two later when the tiny silica needles do their work trickling a complex mixture of neurotransmitters and organic acids into your skin. Among the ingredients in this cocktail is serotonin, one of the ‘happy hormones’ that regulate feelings of well-being and happiness. Kind of ironic really. You go fishing to make you happy and you get a dose of the same stuff that makes you anything but happy.

I was carrying my 11ft nymphing rod, so getting through the jungle was a particularly arduous and painful ordeal. I eventually got through, after stopping several times to unhook my dropper fly from leaves and having to back up to unthread the rod tip from one bit of shrubbery or another. After the jungle comes the task of negotiating the slippery rounded boulders at the edge of the current. In the summer these become coated in some particularly slippery algae and care and balance is required to avoid a twisted ankle or an impromptu bath. Once past this hazard you can breathe more easily as you feel your boots crunch on to the flat seam of gravel that runs down the middle of the pool. This where the grayling live. I fished up the whole length of the pool; nothing, not a touch. Now I’d passed from frustration to aggravation. What was I doing wrong? Were there no fish in the run? Or were they just not taking? 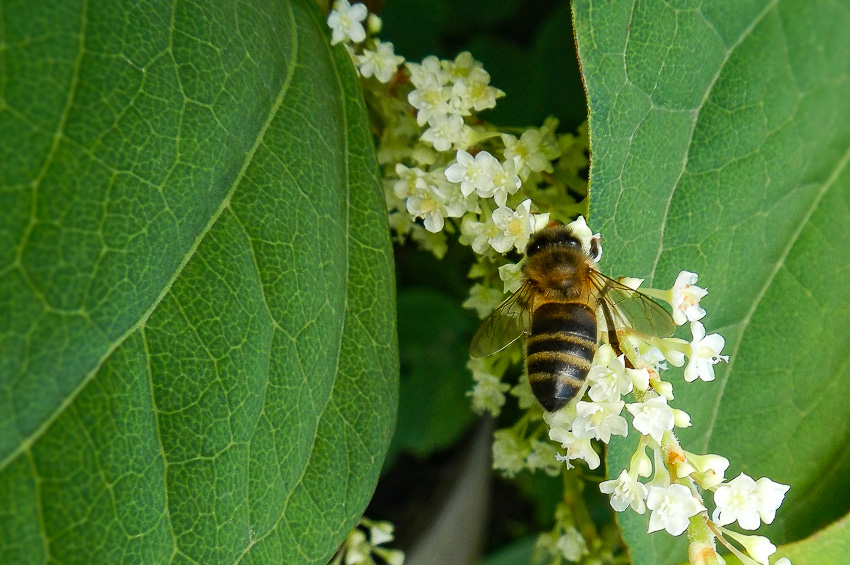 I sat down on a log for coffee and a sandwich backed by an impenetrable wall of knotweed and balsam. I hate this invasive stuff, but the sun was shining on the foliage, the flowers were out and I could kind of understand why the Victorians thought they were nice plants to have in your garden. Dozens of bees were working their way up and down. I sat and watched them buzzing to and fro in the warmth of the sun and watched the water flow by. A squirrel swam across the river and paused on a rock to shake the water from its tail before disappearing into the undergrowth. I leant back and picked some blackberries from an overhanging bush and savoured their warm sweetness. It was all very peaceful. I calmed down and stopping beating myself up for failing to catch anything. I reckoned it was better to be there and not be catching fish that not to be there at all. After all, the odd blank isn’t such a bad thing and emphasises the unpredictability of river fishing, which is at the heart of its attraction to me. I poured another cup of coffee, leaned back with my legs along the log and enjoyed the calm until it was time to head home. 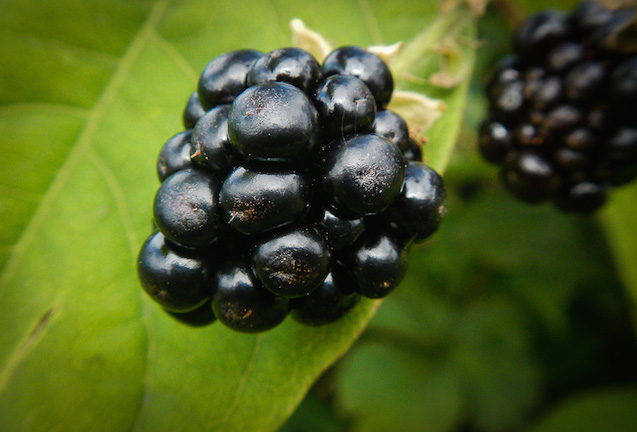 I didn’t fancy the prospect of getting a fresh crop of scratches and stings from battling through the undergrowth and took the path along the top of the river bank. Still not an easy task with an eleven-foot rod, as the narrow tunnel twists and turns through the dappled green jungle. I met a lady and her dog coming the other way and pulled in to one side to let them pass. I waited for the almost inevitable “Any luck?” But I was saved from having to come with up an excuse as she passed by with a smile and a silent nod. 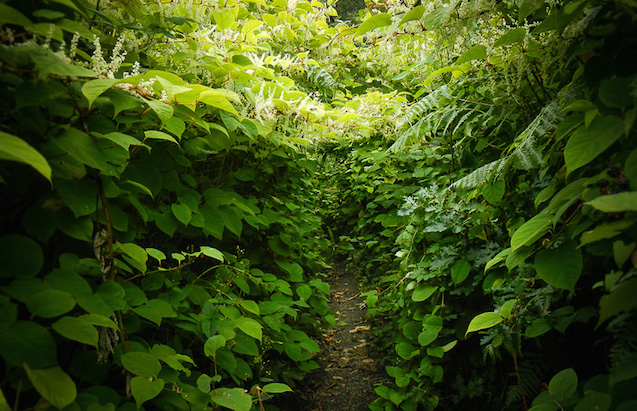 While I was being polite my vertical rod had somehow become intimately acquainted with some bindweed stems. The banks of the Taff have nothing in common with the manicured edges of an expensive chalk stream. But then for around a quid a week for miles of fishing you can’t really expect anyone to come along with a strimmer on a regular basis, or at all. You must work hard for your fishing. It took some time to get it free; once I’d got the top section clear I’d discover that my dropper fly was hooked or entangled somewhere else and I’d have to start the whole process over again. Manoeuvring options were somewhat limited and by the time I’d freed the rod I found I was firmly anchored to the blackberry branches on the other side of the path by my sling pack and landing net. 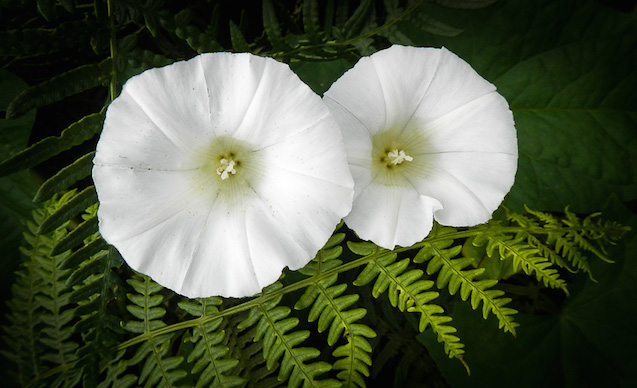 Several cursing minutes later I was finally free and paused to wipe the sweat off my sunglasses. I glanced down at the river. The sun was shining through gaps in the tree canopy and one of the beams was illuminating a patch of clean bedrock between runs of riffled water close to the far bank. I caught a hint of movement out of the corner of my eye as under the surface a dark shadow moved across the dappled brown rock. I put my Polaroids back on, but all I could see were the shadows of foam bubbles sliding down across the polished slab. I waited for a few minutes and then out from the darkness at the edge of an overhanging rock ledge a shadow detached itself and slid over the sunlit rock. I couldn’t make out what it was, but it was big. This was not a bit of the river I’d fished much. It’s not a piece of water that really screams at you to fish it. The smooth bedrock and deep pot-holes make wading difficult, if not downright dangerous in places and the cracks in the bottom eat a lot of flies, so I generally pass it by. However, after my earlier reflections on the unpredictable nature of river fishing, I reckoned that I might just have learned something from a blank day. I walked back to the car reflecting positively on the day and eagerly anticipating my next trip. 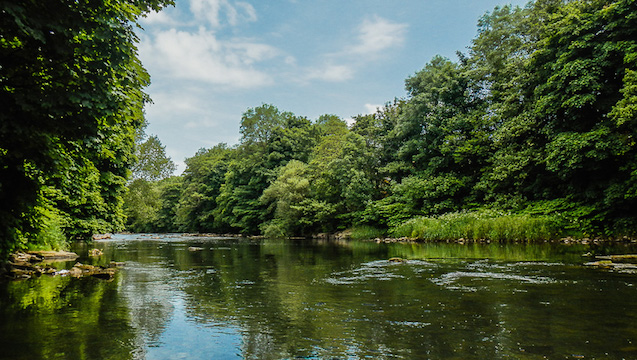 I came back two days later. I approached the spot from the other bank, having waded across a feeder stream and threaded my way through the dense woods. This side of the river is shaded by big old trees and doesn’t suffer from the same verdant jungle as the other bank, but never the less I’d brought a shorter rod, an 8ft 6in 3wt which is my favourite for fishing the duo and a lot easier to negotiate through untracked territory.

The patch of water where I’d seen the big shadow move was in the shade early in the morning so I was going to be fishing blind. A size 14 pink and olive Imp nymph (more on Imp nymphs in next month’s ESF) was tied to the eye of a dry fly and cast into the broken water at the top of the run above the clear patch of bedrock. The duo travelled down several times untroubled by any fish. Then the dry fly dipped under momentarily. I lifted the rod tip and felt a slight drag as if the nymph had picked up a chunk of weed. A pull on the line to retrieve the fly for inspection was met by a heavier pull in the opposite direction.

I raised the rod taking up the slack and line peeled off the reel as the imagined clump of weed transformed into a large feisty fish. The fish was very keen to return to the sanctuary of the overhanging ledge; I was equally keen that it did not. After a vigorous tussle, I prevailed and a big grayling slid into the net. Just. Not as big as the 23inch, 4lb plus monster I'd caught a few hundred yards upstream at the end of the previous season, but a big fish around 3 inches longer than the 18-inch net rim. Comfortably over the 3lb mark and a fish that I wouldn’t have caught if it hadn’t been for the blank day. 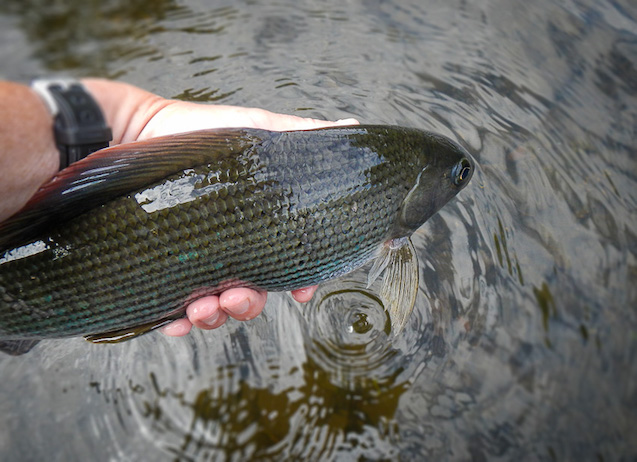