The Three Musketeers. The Wise Men. The Marx Brothers. One Direction (after Zane left, and Harry went solo). Men are at their best when measured in groups of three. And so it was when the Surgeon, the Angler and the Author gathered at the Fox and Hounds, ready to do battle with the wild, wary trout of the Taw and the Little Dart.  It was – perhaps best of all – a reunion of sorts, as I had not seen the Angler for fifteen years and more. He has not changed; kind, enthusiastic, bright and laugh-out-loud funny, armed with a ready smile and a wealth of knowledge, lightly worn, readily shared. He looks well, and we fall to chatting as if it were only yesterday we last caught up. At this point the Surgeon arrives, up from the strangeness that is Cornwall. He is armed with tales from his time following the British Lions in New Zealand, of rain and Kiwi hospitality, of a day at the savage brown trout of North Island. He, too, is unchanged from when we were at university together. He is brilliant, calm, generous and steadfast, with a sense of humour that is a tonic for the weary. Coffee, a bacon sandwich, laughter and the relaxed stories of friends together.   That’s how to start a day’s fishing.

Now, the keen-eyed amongst us will be asking themselves – “Hold on, it’s the second paragraph already, and there has been nothing about tippet, and rods and casting and fly-selection and currents and all that stuff. What’s going on?” It is a good point, but increasingly I find that a day on the river is actually about the beauty of a place, and the pleasure taken in good company. It is about the flash of a kingfisher, iridescent over the dun river, the dapple of willow on water; it’s about standing at the still point of a turning world, and watching for the faint ripple of a rising trout, and being lifted from every-day cares.

Fishing in Devon is not the same as casting on the crystal chalk-streams of the Home Counties. Across the Shires, the butter-yellow trout have been lulled by a thousand years of winding through the water meadows, charmed by the tolling of the Angelus from Norman churches; they grow fat on the plentiful and lazy flies of the indolent south. It is not thus on the Taw. Here there is a sense that the river has fought its way to an uneasy equilibrium; the trees contain its wildness, reeds and rushes stand guard, but its peace is the peace of a hibernating beast. Of course, it could just be that my celtic imagination has gone off on one, but it is true that the wild fish of these rivers are different from their privileged cousins.  They are rose-stippled and aggressive, the sort of trout that would put down their pint, stub out a Capstan full-strength, and follow you into the car park because you spoke disparagingly of their football team. They are small, but feisty, hardy and very wary. This then, was the challenge that we came to, we three men not in a boat. 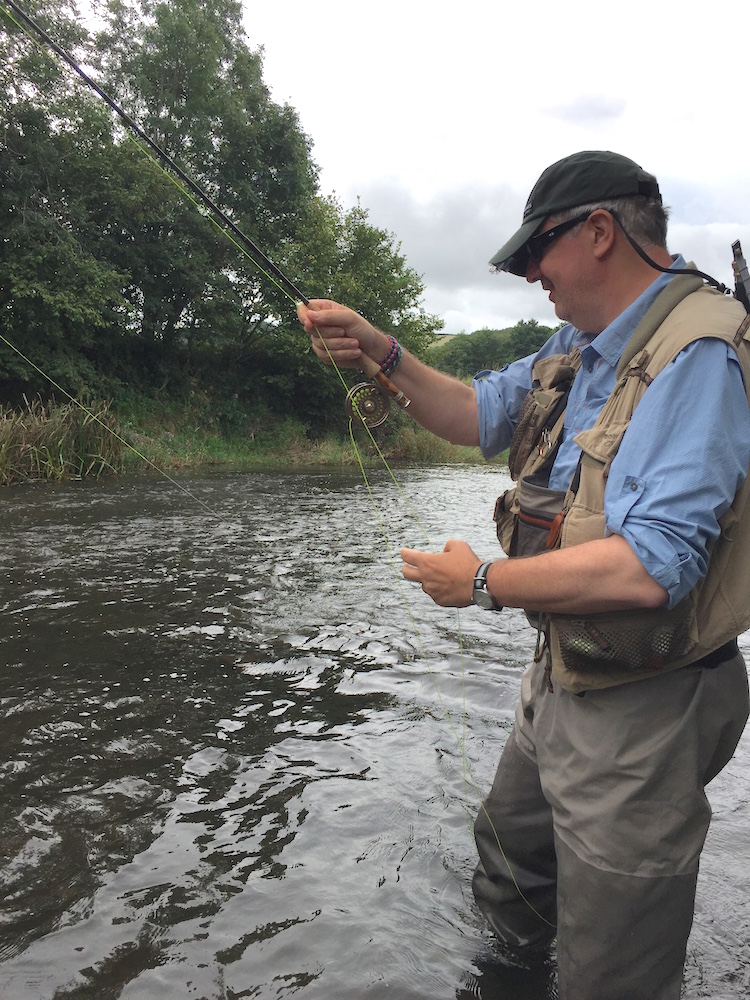 Parked up, we equipped ourselves – waders, three-weights with delicate tippet, and a box full of flies. We were ready, eager; what fish could stand against us? As we ambled amicably to the start of the beat, the Surgeon and I scanned the river, assessed the clouds (as if we knew what we were looking at) whilst the Angler told us what to expect. The water was tan, acidic, fresh after rain. It swirled in deep pools of slow menace and promise, it spilled through bright shallows, it curled into roots and corners, licking the earth as if to extract every last ounce of goodness. We slid and stuttered down the bank’s steepness, and stepped into the water. It took us a moment to acclimatise - wading is always a primitive experience; somehow stepping into an older world. The Angler helped us select flies – and we started with a New Zealand rig – a dry on the surface, and a nymph to fish in the darkness. The Surgeon took the first pool, and was almost immediately into a fish – played, landed and released while I was still bumbling ham-fistedly among the willow-scrub upstream. The Surgeon was casting beautifully, tight loops flicking his line with accuracy and intent.  A big grin appeared through his beard.   I was at the back end of the next pool – the Angler (quite rightly) felt that in the coolness of the freshened water, the trout would likely sit where the sun had warmed the river, and so would be in shallower runs, or towards the rear of the deep sections. The current was revealed by a line of white bubbles, and by the tumbling of waterlogged leaves. I was quite nervous – I’m not sure I can tell you quite why, but to stand in a river like the Taw, and to search for its trout is a great privilege. I did not want to cock it up. A couple of casts later - a slashing take, a swirl, and a bulge in the river. I was much too slow. These are small fish, and they rise and are gone so that even a moment’s inattention is enough to miss the strike. Lesson learned, I thought, and I resolved not to drift into one of my poetic “admire-the-scenery-because-it’s-so- beautiful” moods. Same again. Missed again. The Angler laughed. Kindly. The Surgeon laughed, distantly but sympathetically. I laughed. Teeth gritted. A couple of strides upstream, and a new vista – the river curled towards me, the bank to my left overhung by an old beech and its mighty roots. It looked fishy. It looked very fishy. The Angler pronounced it so. “This is what I call FAF,” he said. “Fishy as F***”. For some reason, we began to sing – slightly flat, but discernably a soundtrack. It was “Highway to the Danger Zone” from the Tom cruise epic “Top Gun”. Suddenly, I was a fishing ‘Maverick’, the Angler was ‘Goose’, and so the Surgeon must have been Val Kilmer. For the benefit of readers, I assure you that there was no topless volleyball. 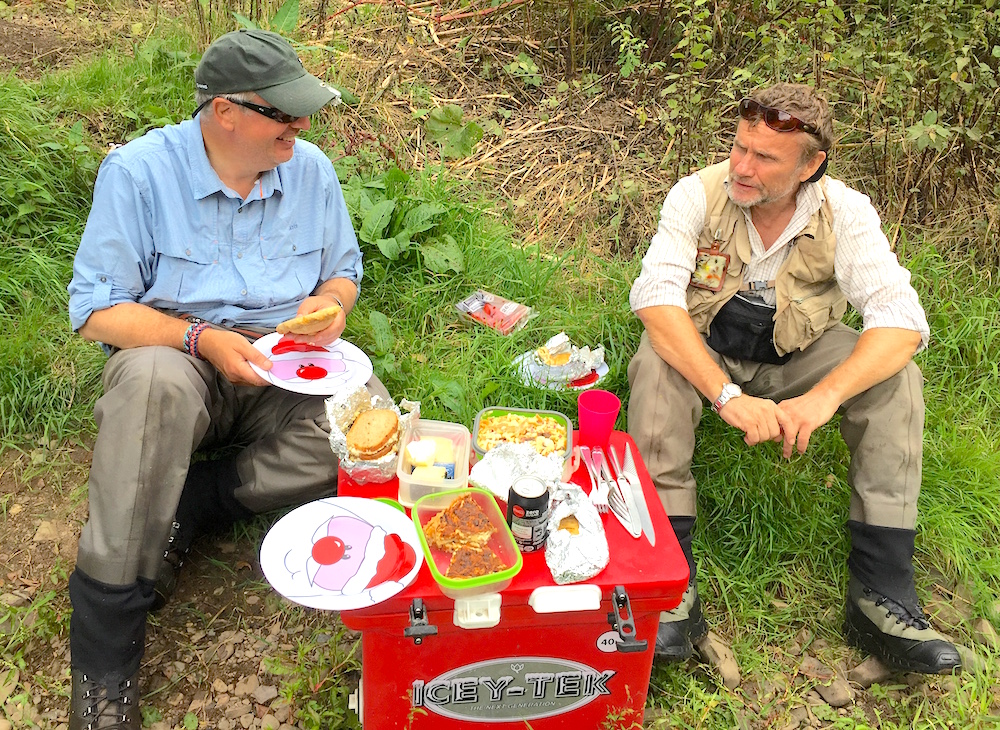 I threw the line into that corner, just on the far side of the foam, and watched the dry-fly drift. A familiar confusion in the water, and a strike – fast but not too hard – an ecstasy of fumbling, and I had on my first Devon trout. I brought it to hand – despite its size it put a good bend into the rod – and we set it loose, unharmed and untamed. It was beautiful, a little ingot of green, specked with silver-black and dotted pointillist’s red, as if the river itself had taken flesh. A big grin, a handshake with the Angler – his smile matching mine - and an exited yodel of support from the downstream Surgeon. These are my brothers.

Lunch on the bank, perched conveniently in the shade, for the day is warming up. Home-made pasties and quiche. Chatter as we pass the coleslaw. Cool water, Bakewell tart (thank you Surgeon and Mrs. Surgeon). A rest, much laughter, a great talking through of the morning’s fish, while we flap away the yellow-bellied bees. We are three trout each at the break, all jewel-bright and healthy.  As we head up for the afternoon, the breeze – never strong – has died, and sedge and tiny grey olives are beginning to drift across the surface. We are excited by this, and the Angler declares the omens are good. The singing has moved on to a sotto voce rendition of ‘Go West’ by the Pet Shop Boys. The fish are rising. Music switches to ‘Jump’ (the Pointer Sisters, not Van Halen) and we tie on a size twenty-two Adams. We have decided to fish together this afternoon, one with the rod, the others to offer support, assistance and much ‘advice’. The Surgeon is up first. To the left of an overhang, in a relatively straight section of river there is a feeding fish. He rises consistently, and within a radius. The back-cast is not simple, but relatively clear. The Surgeon slips, almost ripple-less, into the Taw, and ninjas his way to a casting point. It is like watching a great cat on the savannah, each muscle tense, focused entirely on the prey. The fish continues to rise. And again. The Angler and I are tunelessly whispering “The Lion Sleeps tonight”.   The fly snakes forward, two false casts and out to the middle of the last-seen ripple. Perfect. Pause. The world is still. There is only the speck of white. It is at the centre of existence. It is all that we see. A yellowness beneath. A greedy sip. The fly is taken. Pause. This is the Surgeon being calm, whilst inside I am screaming at him to strike. Finally – it seems an age – he does, and the fish is on. The Angler goes in to help with operations, and the trout is admired, released. We all smile. This repeats itself with each of us in the leading role, all with varying degrees of success. The last cast of the day is through an over- hanging acer, flicking the line sideways, pulling tight loops to avoid the willow and the balsam behind. That slashing take comes again, but I am primed and ready, and have my Taw fish on the dry. I could not be happier. My companions are as pleased. We shake hands, we hug. We share a sense that this has been an important day, not just a day fishing. A relaxed and happy trio sets off across the field to de-boot and un-wader. There are more laughs, but this is the laughter of shared experience. There are goodbyes and further handshakes. The day seems to end quickly.  I start the drive home. On the radio comes “Brothers in Arms”. Yes, I think.  Yes.