Every angler has a rod or reel, tool or gadget, fly or garment, that essential item that they wouldn’t want to be without. Let me tell you about my essential item.

A few years back a friend of the family asked if I would like her husband’s old fishing tackle. He had died prematurely struck by lightening whilst out on the moors. He was a keen fly fisherman, fond of sea trout in particular. After he died she left his gear in the garage and forgot about it, until I came along some thirty years later. When people offer me old tackle I get excited. The anticipation of finding a rare Hardy reel or cane rod peaks my interest. I’m often disappointed. Rooting around in her garage I found a myriad of old nets and bags nibbled by moths and mice. One still had an occupied nest inside. Not sure who was more shocked, me or the mice. There were a few old rods and reels but they were well used and not of the rare or valuable type. I donated these to my favourite Dales pub to decorate the rod racks above the entrance. It seemed fitting. I kept a few of the battered old fly boxes even though most of the ancient winged wet flies were moth eaten. In amongst the bits and bobs I found an old leather cast wallet. The leather was cracked and mouldy but inside I discovered a number of beautifully tied leaders.  Some had droppers, some had flies already attached. Each was beautifully knotted.

In these days of knotless tapered leaders you forget that in the past anglers had to make up their leaders from a series of lengths of material each a little thinner than the last ending with the appropriate tippet for its intended use. Droppers would be included if fishing the wet fly. When I came back to angling I used the new fangled knotless tapered leaders as they were quick and easy. A few years later a fishing buddy encouraged me to try the knotted approach. He shared with me some guides that showed how much of each breaking strain you needed depending on what the leader was going to be used for and its finished length.

I went out and bought some bulk spools of monofilament and I set up a little production line on the dining room table and made up a variety of knotted leaders. I invested in a couple of leader wallets to store them in. There was a good deal of satisfaction to be had in catching a fish on a leader I had made myself and at a fraction of the price of the shop bought tapered leaders. The down side was that it took some time and involved tying lots of knots, not one of my strong points. I also had a nagging concern about the knots creating weak points. What if they gave when I hooked a better than average fish?  Sometimes the leader would catch itself, knot on knot, more an issue of poor casting me thinks. Eventually I slipped back into using tapered leaders. I still have those leader wallets tucked away in one of my fishing boxes. I wonder if someone will find them in years to come and think that they were well tied? Probably not. 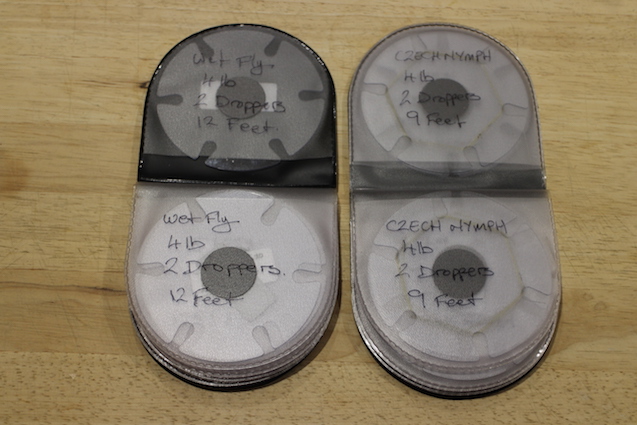 One day I was fishing one of my club waters and I bumped into another member. It was Mayfly time and I was struggling to turn over the big bushy patterns. The other angler suggested I try a braided leader and he offered me one of his. I never cease to be amazed by the generosity of other fly fishermen. Made from braided monofilament they are designed to be more supple than single monofilament and the taper transmits the cast's energy thus turning over flies more effectively. Loops at either end meant they were quick and easy to attach. All you needed to do was add on the appropriate length of tippet and you were off. They certainly turned over the big Mayfly patterns. Within a few weeks I was pretty much converted to the braided leader. I discovered that Orvis did a braided leader kit that included a spool of bimini tippets. These act as the tippet. The bimini knot at the leader end acts as a shock absorber and helps transfer the energy of the cast to the fly. Whilst they floated like a boat and lifted off very delicately the only downside was that sometimes you would get some spray on the first forward cast. This might spook fish on flat calm pools. 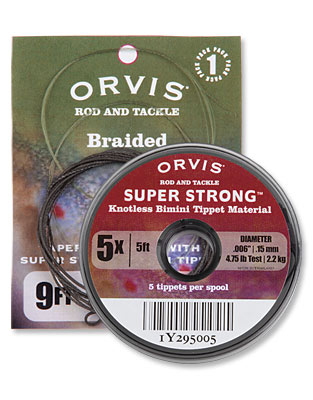 Move on another couple of years and I found myself by the River Ure near Masham on one of the North Country weekends Orvis used to run. I was there to improve my spider and wet fly fishing technique. Steve Rhodes was in charge ably assisted by Stuart Crofts. Sitting under the trees in the afternoon out of the rain Stuart took us through leader makeup for the various techniques covered. I was more interested by his dry fly leaders. Stuart had what looked like a braided leader but it seemed much finer, and it was green. In a quiet interlude I pumped him for information. Stuart was using a furled leader made by Rod Dibble and developed by Rod with Stuart’s input. Superficially similar to the braided leader they were finer and suppler, made from Giorgio Benecchi 12/0 fly tying thread rather than monofilament. Like the braided leaders they were looped at both ends but they were much finer. 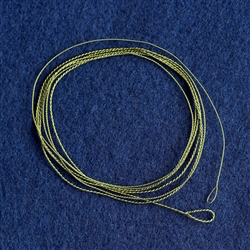 It took me a little time tracking down where I could buy these furled leaders. I bought a couple of 3½’ furled leaders for use with my small stream shorter rods and a couple of 4½’ for my longer rods. The moment I cast them there was no going back to the old braided leaders. The finer, suppler leaders gave much better presentation with excellent turnover and minimal spray. When striking into fish the furled leaders also acted as a shock absorber cushioning the strike and protecting fine tippets from running fish. I was converted.

I was lucky enough to meet Rod Dibble at a Grayling Society Symposium and to get an insight into how the furled leaders are made. He brought the kit with him to the British Fly Fair International and gave demos. You can find instructions on how to make furled leaders on the internet. It involves a board, some pegs, hooks and lead weights. I’ve never tried it myself but they say they are easy to make at home. I was happy to buy mine from Rod. 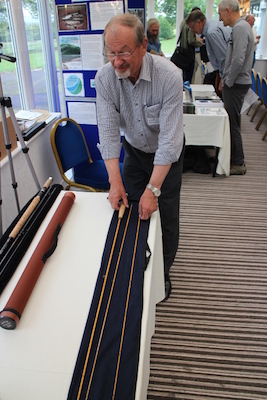 As a Grayling Society Committee meeting I was very upset to hear that Rod was hanging up his spurs and would no longer be making his furled leaders. Desolate I pondered where I was going to buy my furled leaders in the future. Turned out I needn’t have worried as Rod was handing over his board and pegs etc. to Luke Bannister and that Luke was going to carry on Rod’s good works. I already knew Luke through his superb cane rods and had visited his workshop near Bude during a visit to North Cornwall staying with friends.

Luke has in fact continued to develop on Rod’s originals such that now there is a wide selection of furled leaders available on Luke’s website including high vis furled leaders with coloured butts or tips for nymphing, and furled leaders for tenkara. 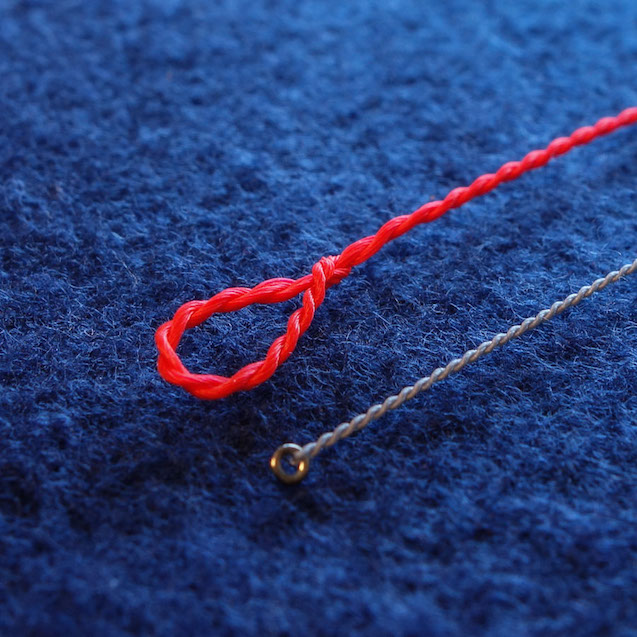 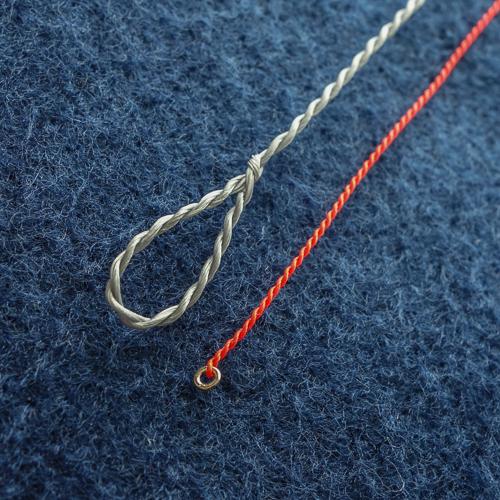 He is also working with Stuart to develop new tapers and using new materials including a new variant for ultra-light rods and longer tapers for those who prefer longer leaders. 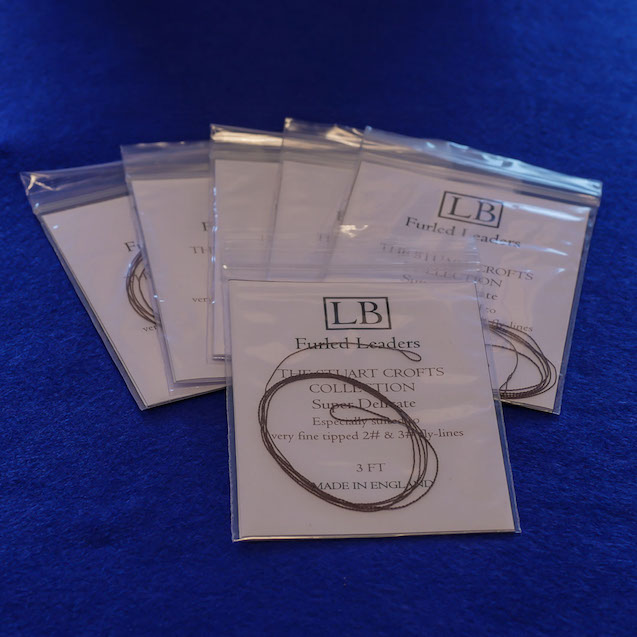 So, for me the furled leader is the thing I would never want to be without, my essential item.

You can buy Luke’s furled leaders through his website. With the Wild Trout Trust selection 20% of the purchase price goes directly to the Trust.

Jim Williams has produced a guide to making your own furled leaders if you fancy giving it a go.