Norway is the land of big Atlantic salmon. The River Lakselv in Northern Norway may not be as famous as its fabled sister river the Alta –just 100km away in the Finnmark region - but it is a river that produces fish of monster proportions. 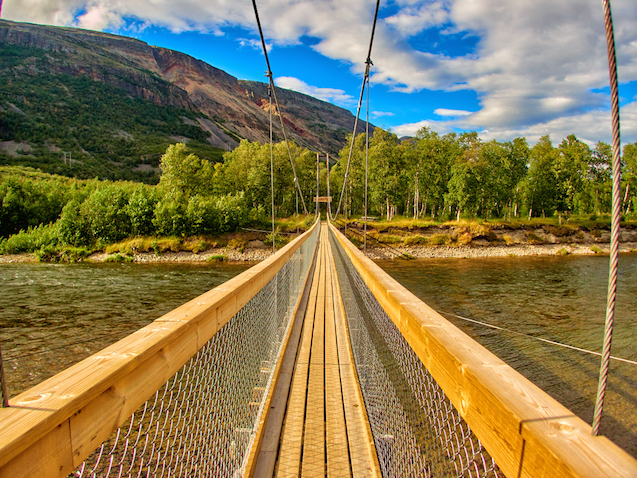 Now, you have to accept when fishing these big fish rivers that you can only expect to get a take or two a week. And even then that's only if you put the effort in. But that one take could be the fish of a lifetime.

In the summer, you get almost 24 hours of daylight, so you can fish as hard as your body will allow. Luckily for me, I’ve recently had a new addition to the family and my wife allowed me to call her Brook Frances (after my favourite salmon fly). So I’ve been in lack of sleep training for the last year. That said, Bob and George were hardcore and fished me to my limits! From the moment our permits commenced, they fished for 36 hours straight. I don’t quite know how they did that, I passed out somewhere along the way. 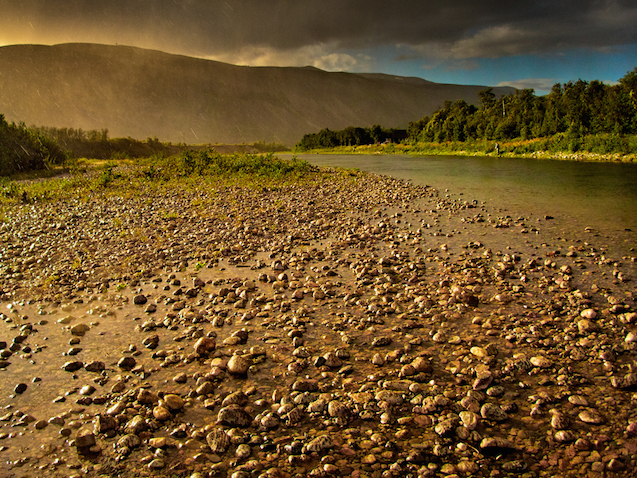 For the first two days, fishing hard for all that time, we didn't get a pull. Not so much as a pluck. It was the third day when we decided to get a full four hour's sleep and be up at 4.30am and back on the river again.

Just half a dozen casts in, on my first run down a promising looking pool, I experienced the most powerful take. If I was half asleep, that certainly woke me up! The fish inhaled the fly aggressively and then nonchalantly returned to its lie. I lifted, felt a couple of long hard head shakes and then just a solid weight. The salmon seemed quite unaffected by the bend in my 15’ Vision Tool and just sat in the current as though nothing had happened. 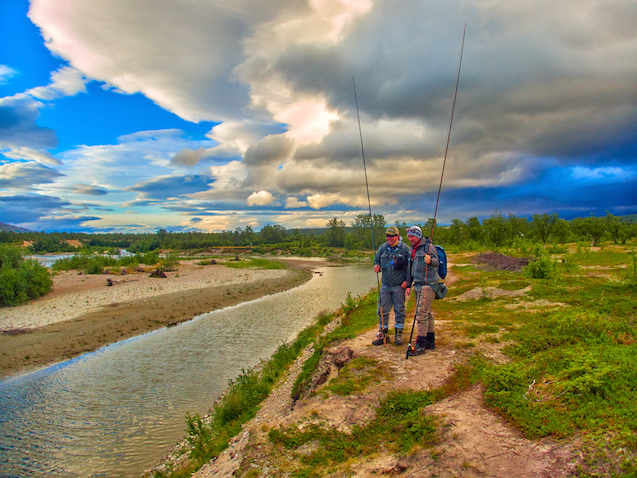 I started to walk way downstream towards it, still bending into the rod to set that hook a little deeper. The fish just drifted slowly back down the pool and sat in a deep heavy flow. Even more bend, and by now I was really leaning into this fish, but nothing would shift it. It sat there for a few minutes and we appeared to be at a stalemate.

Bob had gotten out of the river as my fly line breezed past him, and we exchanged a look acknowledging this was the fish we've came for. “This is a decent fish,” he said. The words had hardly left his mouth when the line went slack. I reeled in as fast as I possibly could, praying the fish had suddenly just swam towards me. It hadn’t. I dropped to my knees in silence. 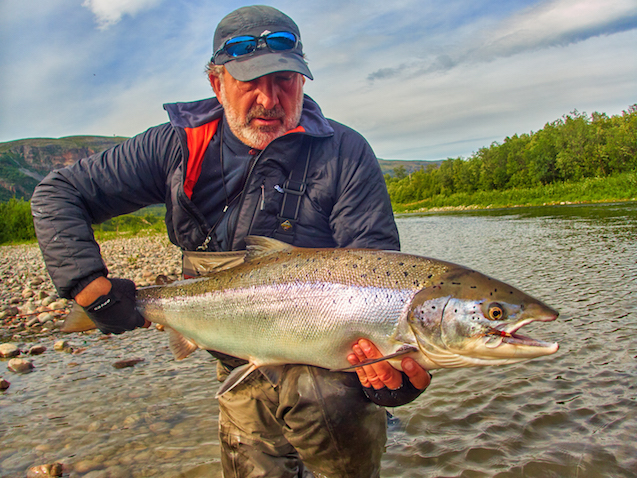 Even though I didn't see it, I knew that was the 30lb-plus fish I've always wanted to catch. Even now, I still try to rationalise what I'd done wrong. What could I have done differently? But we all know sometimes salmon just don't stick.

We fished on. What else can you do? For days, our Spey casts stretched out over the Lakselv, our flies swung enticingly over three different river zones, we discussed tactics and strategies and we went without much sleep. Occasionally a grilse would snatch our fly and we’d have a momentary surge of hope. Then we went back to searching for the big ones.

For the last day of the week we were on Zone 3, the highest zone upstream that we fished. By this point we'd averaged four hours sleep a day. I'm not saying we fished for 20 hours a day, as we had to eat. So 19 hours would probably be about right. 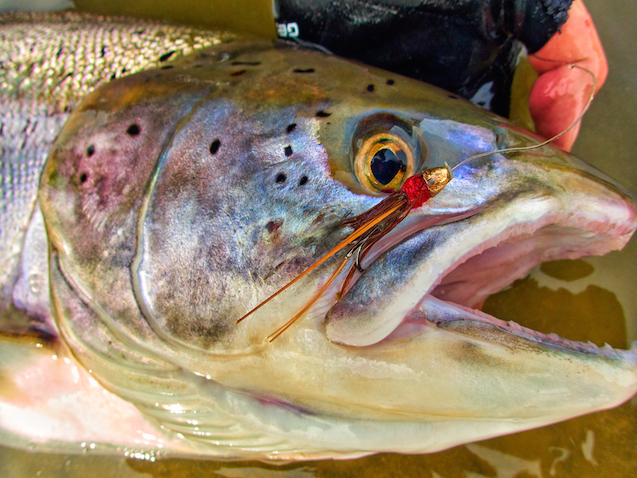 Zone 3 is absolutely beautiful fly water and in breathtaking scenery. We were also acutely aware that the fish that reach this far up system are normally the bigger boys. You always live in hope. We got there early again about 5am, and the plan was to fish it hard until our permits expired at 6pm.

By 4pm, we'd fished the pools hard and I was starting to come to the realization that my chance for the big one had come and gone earlier in the week. With no joy in one of the more reliable pools, that ended in a long set of rapids, I started to wonder whether there was another unseen pool lower down – and if I even had time to fish it if I could find it.

I bushwhacked down alongside the swift, white water and 15 minutes later, swatting away mosquitoes, I gazed down on a fishy looking pool from a 50ft high bank. Sliding and scrambling down to the water, it was clear that  the edge of the river was a deep boulder-strewn drop off. To make matters worse, a low canopy of trees above my head made attempting any sort of Spey cast annoyingly tricky. 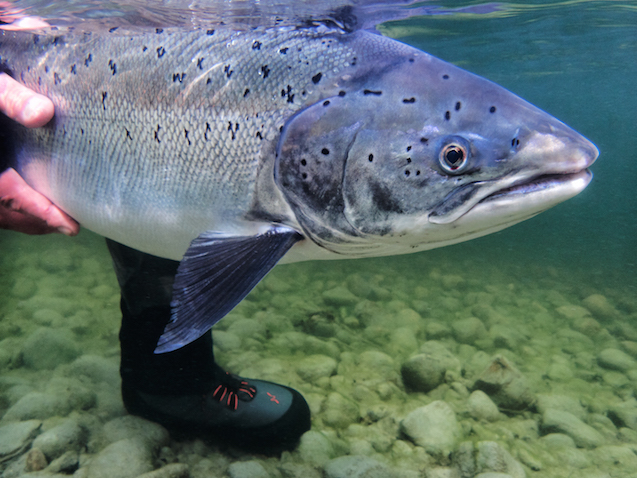 Improvising a kind of flat Spey cast, trying to keep the tip of the 15-footer out of the branches, just about enabled me to reach the main flow of the river before the flow swept the fly back into the near bank at a rate of knots. My fly was probably only swinging for a matter of seconds before the fly hit the fast flow then whipped it around to the dangle. I thought it pretty pointless, I looked back up the bank behind me trying to figure a way out and head back to the boys.

It was only then I realised getting back up such a steep bank was going to be tricky, but I could see a kinder escape about 600 yards downstream. So, I thought, I might as well keep flicking the fly out as I struggle down to the exit point. It was only my third makeshift cast when, to my utter disbelief, the fly was wrenched away and with my rod tip still impeded by the overhanging canopy, I felt that gut-wrenching head shake. How on earth have I hooked a fish here? And how the hell am I going to play it between the fast flow, low canopy, steep drop off and ankle-breaking boulder-littered bank? 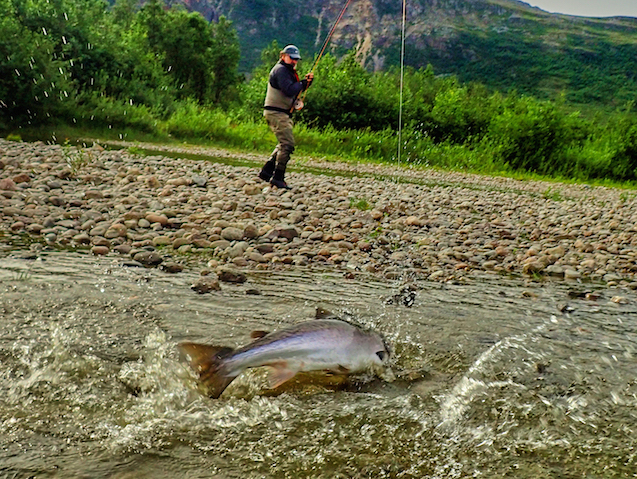 The fish again didn't do very much initially, so I tried to bully it quickly towards the bank. Nice idea! As it reached the boulders beneath my feet, I saw a spade of a tail break the water, and in an instant it tore off and hit the fast flow between the rapids above and below. I've never seen the line peel off my reel as fast as it did right then. Before I knew it, the axle of my spool was visible below a few final twists of backing. I’d never seen that before. Realisation dawned quickly and I cranked the drag up as far as it would go.

Of course, I was risking a break-off – you never treat a big running fish like that. But I really had no choice and had to hope the 30lb leader would be strong enough. 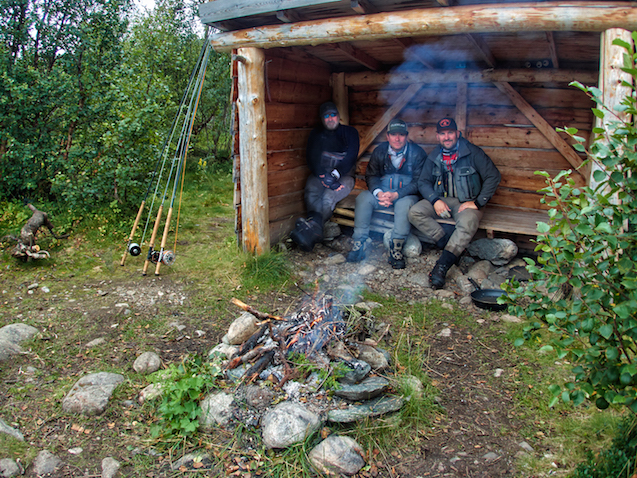 If you’ve never bounce-stopped a large salmon in full flow before, let me tell you it was quite an experience as the rod simply flattened. Somehow everything held. Then I was in a blur or reeling and running, tripping over boulders, trying not to fall in, watching the rod tip twang off the overhanging branches. The salmon kept trying to turn and rejoin the force of the current rushing downstream, but I wasn’t giving an inch of line. My only hope was to try and keep that fish facing me.

Against all the odds, I managed to get the fish within reaching distance, but with nowhere to beach it. A little pocket of water behind some boulders could contain the fish but the only option was to steer it – well, lift it - over the rocks. It was now or never, as I hauled the fish half way over the boulder. Suddenly there was a loud crack as the rod tip gave way. I continued to pull, and as the fish was almost over the rock, it flicked its tail snapped the leader as well. Diving half into the river to grab its tail, I pushed her into the sanctuary of the flat water. I sat staring at her as she flared her gills in the shallow water, recovering. I didn’t know which of us was more exhausted. 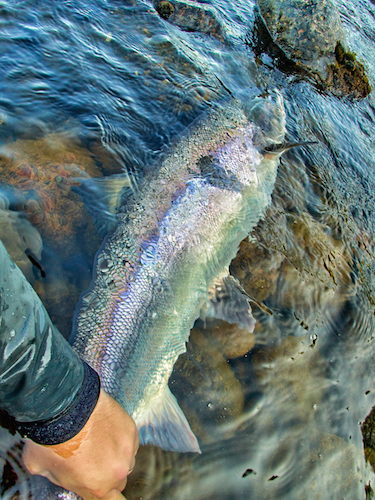 I sat in the river with her for 15 minutes cradling her until she was ready to go. It felt like we were consoling each other. She eventually gave me that kick in the tail letting me know she was ready. I released her and it was awe-inspiring to see how powerfully she swam off through the rocks back into that heavy flow.

According to the Lakselv fish size chart, she was 28lbs at 105cm in length. Not the biggest Lakselv fish by any means, but my biggest salmon to date and, in any case, those are just numbers. It’s the fight I’ll never forget. I took apart what was left of my rod and wound the snapped leader on to my now grating reel. That was my last cast of the trip.

But still, that lost fish continues to haunt me. The next day another angler landed a 42lb salmon, as if to demonstrate the potential of this river. These fish are the stuff dreams are made of. So I’ll be back dreaming of the monster salmon and hoping the next one stays on.

Photos are courtesy of George Kavanagh and Bob Sherwood

More from Brett at his website The Fly Fishery