Our good friend Leo Suchy takes us through a tricky cast and a tricky fish. Did he catch it?

It was late in the afternoon and the three of us were a bit exhausted. This was our third day of fishing the Moldova river in the Czech Republic and we were starting to feel the effects of getting up early, wading and casting all day and staying up way too late in the evenings. So on this day, Björn, Felix and I had agreed to quit a little earlier to save some energy for the fourth and last day.

As we were walking along the bank, just about at the point where we would have to leave the river to get to to the street where our cars were parked, we spotted a rising fish in the current about 50 feet from the bank. Björn said he had caught enough fish today, Felix wasn´t quite comfortable making such a long cast and since someone just had to do do it this was my chance to try and catch one.

This wouldn´t be easy since there were two trees on the bank behind me that I had to thread my back cast between as I was standing in the slack water at the edge of the fast current from a mill channel running into the main river a few yards downstream from that spot.

The trout was feeding at the edge of the main current so there would be quite some mending involved to stop the fly from dragging and the fast current from the mill channel would be grabbing the belly of my line whilst the tip would rest in the slack water between the channel current and the main current which would straighten the leader far too quickly.

In my mind I was going through all the different steps of the cast trying to imagine how to get the fly far enough upstream of the trout so he could see it but not so far as to run out of slack in the leader at the end of the drift, how to place the belly of the line far enough upstream in the mill channel with a quick mend right after the line touched down on the water. In theory this would work and I was sure that an experienced caster wouldn´t have much trouble exercising this but my skills are still miles away from getting something like this right on the first try. So I decided on just trying my best, screwing it up a few times until I would either get it right or put the fish down.

As there were a few big caddis flies coming off the water the fly of my choice was a size 10 Deer Hair Caddis. This particular fly had been playing musical chairs in my fly boxes. It was always either too big to imitate the caddis flies on site, or it had been declared to be a bit too ugly to fish, but I had never been ready to take it out of the fly box, because maybe some day this would be the right fly (or the last one). Maybe you have one or two of those flies in your box? Anyways, today was the day, this fly could finally be the one. So on the end of my tippet it went and the casting chaos would begin.

Remember the two trees behind me? Well, I didn´t. So the first cast was over before it really started, but my friends had quite a good laugh and the fly was easily extracted from the twigs, so on to take two. And three, and so on.

The casts were either not long enough in the first place or the mend wasn´t big enough, or, the leader was either too straight or piled up too close to the tip of the line. But after a few tries I had managed to get a halfway decent drift over the fish without response. I think in this case you are either supposed to change the fly or rest the fish for a while but I was way too impatient for any of this and so I made another cast, another drift, and the fly disappeared in a splash. I set the hook, the fish was on, but before I could realise it had finally happened, the fish was off again after a second.

Okay, obvioulsy I was doing something right and something else wrong. After making sure the hook point was sharp, I made a few more casts and accidentally hooked and lost a smaller fish about ten feet behind my target, and after numerous attempts the trout took the fly again, and whatever I had done wrong before, I was now doing right, but don´t ask me what it was!

All I know is the fish was on, and I was slowly bringing him towards me, while Björn was wading next to me, getting ready to get the fish in the net and take a quick photo.

A few hours ago, I had lost a nice rainbow right at the net, so I was really relieved when this beautiful brown trout finally came to the net. After removing the fly from his mouth, I held my rod below the net to get a rough measurement of the trout´s size, making a mental note like "from the butt to about this much above the cork“and then I held the fish in the water for a few seconds until it had recovered and swam out of my hand. To my surprise, the trout then turned around and rested in the slack water next to my boot for a moment. Long enough for Björn to take another picture, before he swam away. 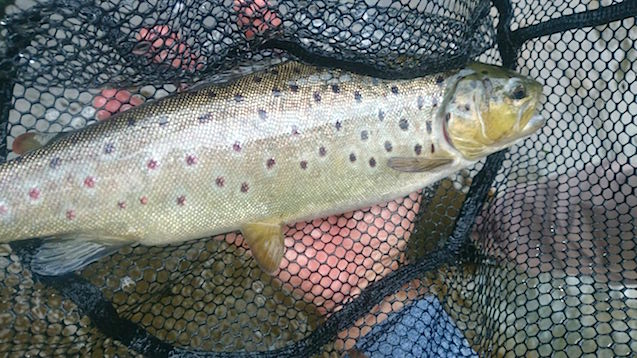 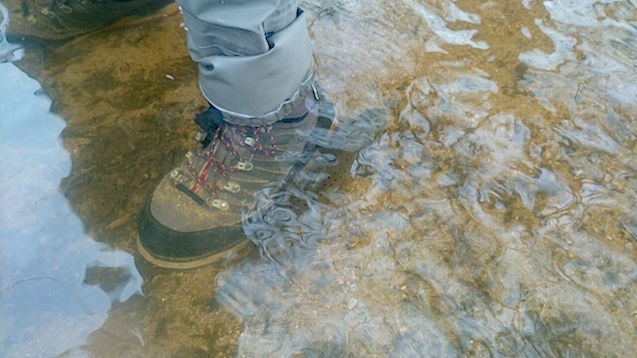 When we held a tape measure to the rod, we guestimated the trout´s size to be about twelve to thirteen inches.

"Allright, let´s go“, someone said, and we went back to the cars, got out of our waders, and took down the rods. Felix lives in Austria, right next to the Czech border, so while Björn and I drove back to the guest house, Felix drove home. The next morning, we were going to meet again for another day of fishing.

Before ordering dinner, Björn and I had a beer and a cigarette at the porch of the guest house. While we were talking about the day, Björn kept staring at the pictures on his phone.

"I think the trout was bigger than thirteen inches“ he said. "Look at the picture of it resting next to your boot, I think the fish was at least an inch longer than the boot, maybe even two inches. Maybe you should measure the length of the boot“

I grabbed the car keys from the table, hopped down the stairs of the porch and opened the insanely clutered trunk of the car. The boot, still dripping water from the river, came out to be thirteen and a half inches long.

With that information I returned to the porch.

"So let´s call it a fifteen inch trout“, Björn said, and I had no desire to argue about that.

The next morning, when we met up with Felix, Björn proudly told him about his glorious idea to measure the boot to determine the trout´s size. "Fifteen inches, that was a really good fish“, he said.

"Well, I don´t care that much about the size of fish“ I said.

Björn had a big grin on his face as he said: “Yeah, but if you don´t care THAT much, why did it take you just seconds to jump up from the chair, run to the car and measure your boot?“

Okay, maybe I care more about fish size than I think. That was really a nice fish.

And the ugly Deer Hair Caddis now lives in my collection of "flies with a story“.