Awesome artwork plus a 'must have' casting tip. Ladies and Gentlemen, I give you Mr Jason Borger

You know how it goes: You’re headed out for a big trip. Your buddy who knows you fly fish (and has just watched a certain movie about fly fishing in Montana) wants to come along. He’s never held a fly rod before, can't tie on a fly, but he is ready. Now. So, you’re going to take him. 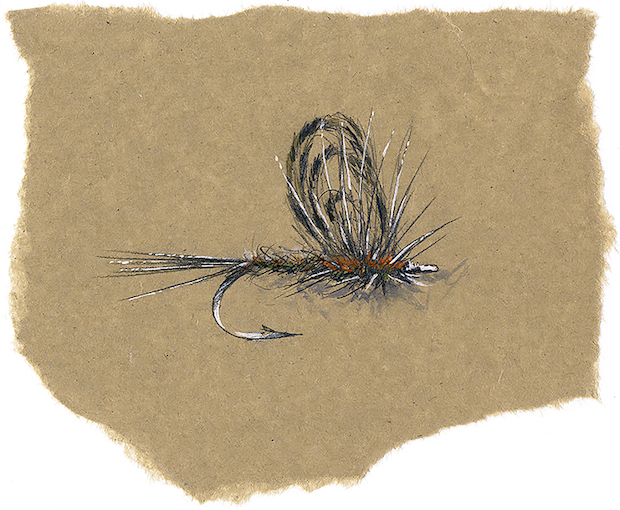 You get to the river, lash a size-six Double Humpy onto a hank of 2X for your pal, and hand him off to another guide. They jump in their boat and drift away, your buddy already lashing the water with that classic beginner’s cast, the line dropping in a curvy heap. The guide gives you a dirty look before their boat disappears around the bend. Problem solved. Until …

Lunchtime. Everybody is to meet up bankside to chow down and swap tales of 14-inch rainbows won and lost. As you approach the spot, you notice everyone swarming around your buddy’s boat. As you pull up, you realize your buddy is the center of attention.

You stumble forward, asking what’s going on. Your novice pal turns and says, “I don’t know. Is *this* a big brown trout?” He holds up a golden-sided slab somewhere on the far side of two-feet long, its dime-sized spots and hooked jaw gleaming for all to see. 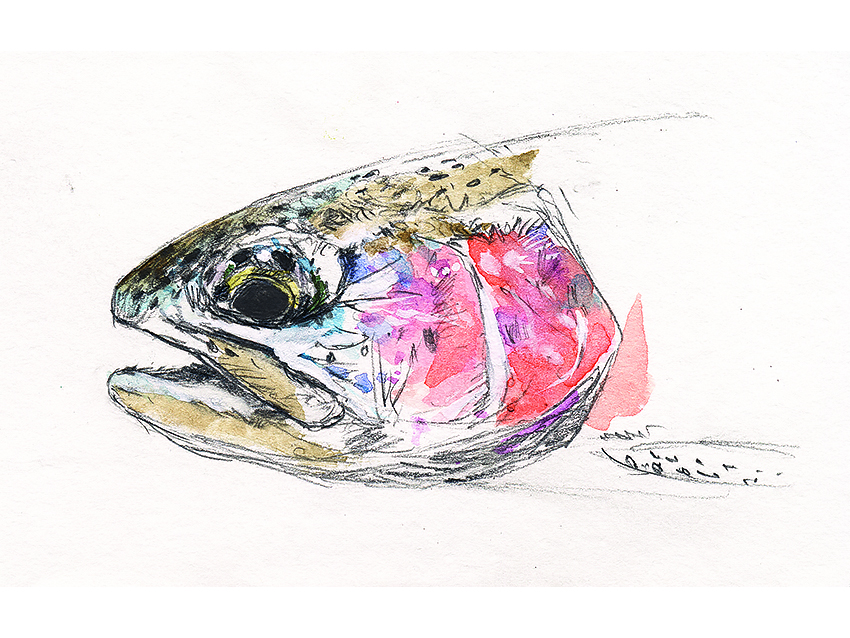 Hanging your head in pained resignation, you mutter that all-time exclamation of long-time anglers everywhere:

Yep, beginner’s luck, all right. But it’s short lived, and soon you can have your revenge. Now your buddy is hooked on fly fishing and will start taking casting lessons and attending fly-fishing schools and learn how to cast “properly.” He’ll throw laser loops and the line will rocket 30 yards, dropping arrow-straight to the water. He will never again catch a two-foot-long brown trout, and will have to be satisfied with the 14-inchers you’ve been catching for years.

Remember that “beginner’s cast,” with the line dropping the water in a curvy heap? You know what that cast was doing? It was killing drag. All those piled up curves of line, although poorly controlled and directed, eventually sent that size-six Double Humpy over that two-foot brown—a fish that had never seen a drag-free drift in its entire life. It was then just, “Set the hook!”

Of course, once your buddy gets his lessons and “learns how to cast,” he’ll never make a drag-free presentation again and thus no more beginner’s luck.

Or is it? Wouldn’t it be nice to have beginner’s luck all the time? Wouldn’t it be nice to catch a whole bunch more of the 14-inch rainbows and have a real shot at the two-foot browns? You can’t just slop the line out there and hope that a big fish will take (you have to be a beginner to pull that off, right?). So what can you do? Add some mending luck.

Let’s just get right to it: Make a high-aimed Overhead Cast, and immediately after the forward stop (as the line loop is unrolling), reach the rod tip directly down to the water’s surface. That’s an aerial mend, one that produces “beginner’s luck.” This skill is often called a “Puddle Cast,” a “Pile Cast,” or a “Slack-Line Cast” (depending on who’s writing about it). The action that makes it all work is really an aerial mend, though, so I’ll use “Puddle Mend” here.

The intent with a Puddle Mend is to create a length of small, accordion-like "S"-curves in the line and/or leader. Pure, beautiful, deliberate slack that looks suspiciously like a beginner’s cast, just more controlled. Each of those little curves is intended to help reduce the effects of small currents pulling against the line. Out in the world, the Puddle Mend is typically, but not always, used when fishing up-current.

Let’s refine the directions a bit. From a casting stroke perspective, you’re going to flow through the stop and right into the mend itself. It’s not stop:mend. The movement should feel as if the rod is sending the loop on its way, but there is no full halt of the rod handle, just a turn into a smooth, down-and-slightly forward aerial mend so the rod tip ends up touching the water. You can use the natural force of gravity to help your arm move more naturally. The loop will still be aimed in its original direction, but now the rod leg is angled to the water’s surface. As the cast falls to the water, the upward angle provides for the “puddling” effect. As Eric Taverner put it way back in 1929, those curves will help you avoid “the fatal straight line.”

Once you have the basic motion, you can then control it proactively with your muscles rather than with a gravity assist. When it comes to the Puddle Mend, the angle of the forward cast above the water’s surface has a marked effect on how much line will get puddled to the water. The higher the inclination of the line, the more the line will puddle, the lower the inclination of the line, the less it will puddle. In addition, as the cast becomes more horizontal, fewer puddles will form in the rear part of the line. In other words, the puddle effect will be confined more to the front of the line. 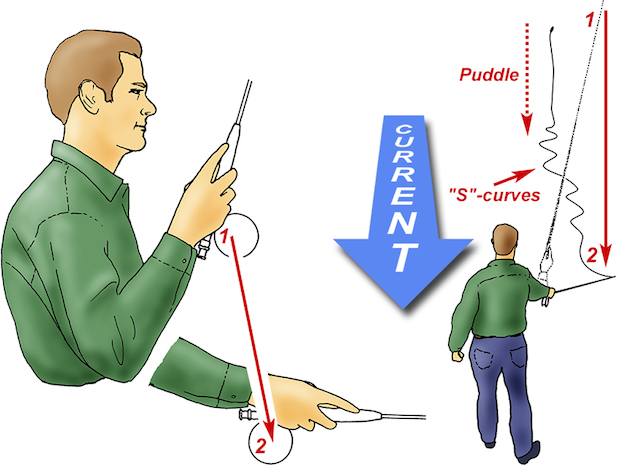 (1) Make a high-aimed forward cast and then (2) immediately drop the rod tip to the water’s surface. It’s not stop:mend, it’s “stopmend" as a flow. The line will fall in a series of “S”-curves. It is in those curves that you can find beginner’s luck.

The key to getting the absolute most from this skill is a higher forward cast trajectory followed immediately by the downward mend. This is where an Elliptical Cast can really be useful. That is, a more side-arm backcast combined with a more overhead-style forward cast. Making a relatively low-aimed backcast followed by a forward cast that is directed horizontally, if not more upward, is the ticket. After the line loop first forms, make the mend, putting the rod tip right on the water’s surface. A little experimentation will quickly reveal just how dramatic the end result can be by using an elliptical basis.

Two caveats: Don’t anticipate the mend too much or you may “go soft” with your acceleration too early in the forward casting stroke. If you do that it is possible to get a tailing loop. If you start tangling the fly on the line, this is possibly what’s going on. And to the opposite degree, don’t give the forward cast so much go that the unrolling loop essentially pulls the S-curves out of the line despite your attempts to the contrary. A forward cast that is hauled too fiercely is a typical culprit with this problem. 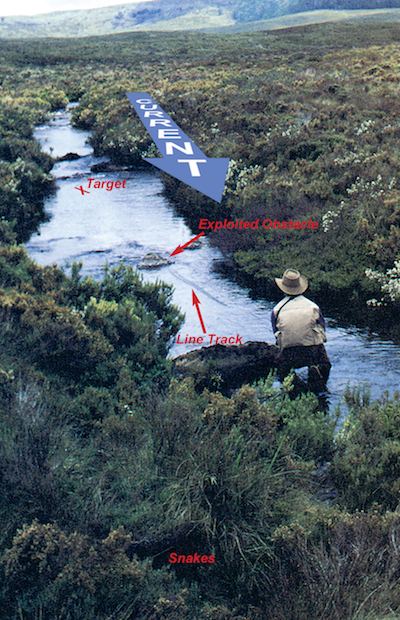 I consider the Puddle Mend to be one those “must-have” and “must-use” techniques. It’s really is a way to have some “beginner’s luck” without having to hope quite so much for the luck part. That said, even this skill can be enhanced by out-of-the-box approaches to tough spots. Here’s one of those approaches that makes use of rocks, logs, and other obstacles to further boost the usefulness of the Puddle.

Fishing in Tasmania many moons ago, my father and I were sussing out a small spring creek with our guide, Ken Orr. The stream was populated by spooky brown trout and equally spooky snakes (the latter is its own story). After a long walk to the lower end of a huge meadow, we came to a shallow, straight pool positioned above a gentle riffle. A slow, deliberate rise in the upper reaches of the pool immediately brought to mind the stories we had heard about four-pound browns. There was no way to approach from above without being blatantly obvious, so the cast had to be from below. The problem was that the cast had to be made from the swifter currents of the riffle up into the slower currents of the pool—a recipe for near “insta-drag,” even with a Puddle Mend. There was one redeeming feature of the pool, however: a small rock planted front and center and about halfway between the necessary casting position and the fish. As my companions kept an eye out for tiger snakes, I crawled into position at the head of the riffle.

Once in position, I made a Puddle Mend that fell directly over the top of the rock. With the rock mostly holding the fly line in place at the mid-way point, the faster current closer to me had little influence over the drift. Indeed, it was more like I had made the cast from 20 feet away, rather than from 35 feet away. With the fly dead-drifting cleanly, the fish sipped it confidently. The reward was not the fish I had hoped for—the brown flirted with that fateful 14-inch size mentioned earlier in the article—but did I get the satisfaction of taking a seriously wary trout in razor-thin water. Actually, since this is my story, let’s just call the brown an even 20 inches, which seems better considering the difficulty level. They sure grow them big in Tassie! Hope you’re all cool with that.

14 or 20, it was the obstacle that had made my delivery a matter of one cast with a Puddle Mend, rather than requiring me to jump through proverbial presentation hoops. 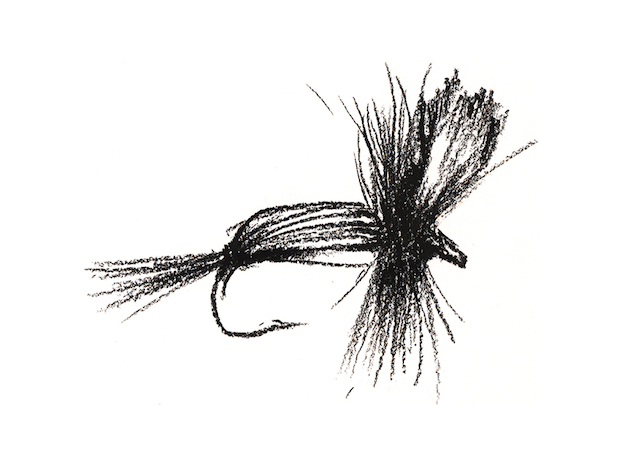 Of course, things can go sideways using rocks, logs, and whatever as drag reducers. If the fish doesn't take, your line is now draped over the obstacle and a standard lift into a backast may find you snagged. I suggest learning some of the more dynamic pick-ups in the world of fly casting, those that can lift the line free before the fly gets an undesired death-grip. I’m not gong to cover those in this article, but there are plenty of resources out there to read, watch, or surf through to find what you need.

So there you have it, some beginner’s luck and a little rocking with drag. Both approaches can make a surprising difference for flowing-water anglers no matter where you eat, sleep and fish.

Jason Borger grew up in the world of fly fishing. Since his teens, Jason has been teaching, shooting videos, and writing about the sport. His background has also lead to his involvement as a fly-fishing consultant and double for commercials and movies. You can check out his blog at fishfliesandwater.com.