Charles Jardine needs little by way of introduction. It is fair to say he has lived a fishing life and we caught up with him and touched on the past, present and future.

Charles where did fishing start for you?

Gosh! You know, when the last Dinosaurs left a few pools behind…..

Seriously: the earliest recollection that I have Pete, is being taken by Father to a Mill that straddled the river Stour in Canterbury and being overwhelmed by this vast world: I was mesmerized by the water and  captivated by what I imagined might be in it…I think I caught a perch. I was four. That was 59 years ago (I know, I know…) and the best bit is, I can still recall that secret world unfurl, now. I have much to thank my father for. 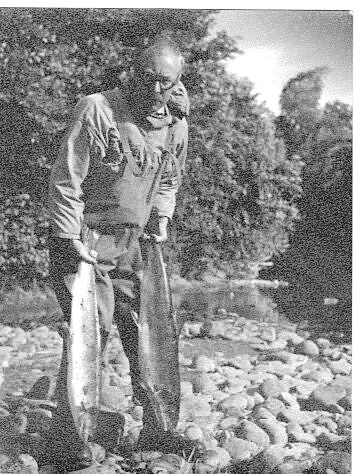 Was art a progression from your fishing or another passion that developed and eventually combined the two?

Very much so. And again all roads lead back to my father who was, back in the day, a much sought- after artist and did the almost iconic black and white Luron illustrations – one of the first manufactured nylon monofilaments to be made in this country. So I was surrounded by art from a very early age. My father though was an extremely hard task-master, and did almost anything to NOT get me to pursue art. I guess he knew how tough it would be. He was right, of course.  However I gained a sort of scholarship into art college leaving school before my 16th birthday which was rare based on my folio work…and that was that.

Has there ever been a turning point in your fly fishing career, a path you were pleased you took or one you regret you didn’t?

Blimey! That’s a good one. Hmmm. Pete, I am not sure. Certainly there have been two crossroads points in my life.

The first, was being asked to work for Dermot Wilson’s operation based at Nether Wallop Mill (now the home of  Simon Cooper and Fishing Breaks). That pitched me, full time, into the emerging and burgeoning market of game fishing tackle  - we created our own lines of rods and so on so I was involved in development, the selling and I suppose, pivotally, guiding some of the great fly fishers of that generation on the Rivers Itchen and Test: absolute Gods and Goddesses to me: The Voss Barks’, John Goddard, Ed Zern, Hoagy Carmichael, Brian Clarke, Frank Sawyer, Lee and Joan Wulff , the list was endless; and I am glad to say, many became great friends and we still meet, those that are left which is sadly, few now. But I guess it was meeting John Wilshaw the then editor of Trout Fisherman magazine and his encouragement for me to write and illustrate for the then EMAP  stable. So I have, as with my father, a great deal to thank Dermot for.

The next turning point was, after the Mill, and resumption of formal teaching, and a few years later running out of leave and being asked to cover a trip in Colorado for EMPAP. I resigned and went fishing (sound familiar)! On that trip I met my dear, dear friend Steve Parton (who I actually miss so much on a near daily basis – he died way before he should- such a great angling mind. Brilliant). Thereafter it was writing, illustrating and painting. So far so good.

Oh! There is a third!! Had I not been invited to be part of the Countryside Alliance almost at its inception to look after angling I would never have brought teaching back into my world and created Fishing 4 Schools – my opus I suppose (and as yet unfinished!).

Regrets: Loads. But the biggest I would say was not going to work in the USA. It was there, I just didn’t do it. Hey ho. But you know, had I done that and made that quantum move, would I have had the two things that are most precious to me? Annabelle and Alex, my two phenomenal children. So you see, Pete, fate. You play with the hand you are dealt.

Your greatest achievement in fishing?

As an instructor and guide how are things different now from when you started?

This whole world has changed out of entire recognition. When I started there were a handful of both. Guides were not even about. We had casting instructors and ghillies: that was it. Now? Hell, everyone is a guide. It’s weird and rather follows the path of the rise of the tackle shop years ago. People retire or lose a job have some money and think: Ah ha! I will turn my hobby into my profession. Nothing wrong with that, except the majority go, “well I can fish a bit….so…” . you abd I know there is a damn sight more to it, than just taking someone fishing and fishing by the side of them and occasionally dropping in sage like words, or handing them the odd fly. I know you don’t do it: I don’t  do it: Lew doesn’t do it: neither does Alex. Fish. When guiding, you owe it to your customer to GUIDE them…..not freakin’ well fish yourself. Can you tell that you have touched a nerve? The other thing is, are these folk safe to be with? has the individual taken their accreditation – child protection, first aid courses? Are they qualified? Have they made a commitment to the profession they have embarked upon? Are they insured?

Now, don’t get me wrong, there are a lot of really good folk out there. But please, I really do hope that those that haven’t, make a commitment to the sport that they are looking to derive an income from. There a few professions where you would not NEED to be qualified, why should the intricate business of angling be any different.

But gosh! As an overview, things have become so professional. That is a force for good. I think. 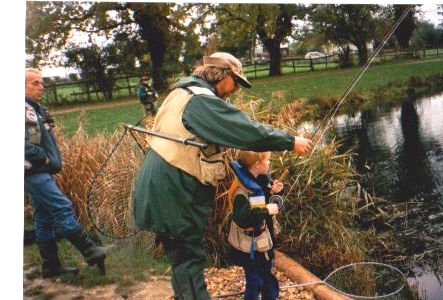 What advice would you give an aspiring guide or instructor?

Be mentored by someone that is hugely qualified and join others and soak up wisdom of experience. Always, but always, keep an open mind. But do NOT flit from mentor to mentor just so you hear the words that you want to hear; take the truth on the chin…and get better. You owe it to your customers to be the best you can (Please see above!)…and continue the development process!

Is too much emphasis placed on fly casting rather than fly fishing?

Pete, I think that depends. I often believe, especially in the stillwater world, that the reverse is true…Lord! I see more crimes against the fly rod in that genre than anywhere else. Actually, I think that you can one of two ways. That is not going to make you a bad person. Promise.

However, good casting can certainly aid better fly fishing! Does a career in politics beckon? Let's hope not, eh.

You are involved in bringing youngsters into fishing with Fishing 4 Schools, can you tell us about it?

The best way of doing this is to actually “paste” something that I did for Stevie Munn to see if we can get the project going in Northern Ireland.

An overview of F4S 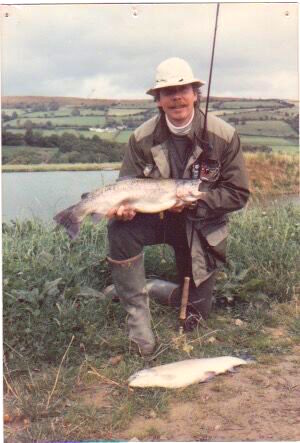 We have been able to assist young people in attainment of formal GCE qualifications.

Are you seeing children from your courses going on to develop into fully fledged anglers?

It is so difficult to say. One thing that MUST happen and we really should be lobbying the AT about this, is my concept of we, at F4S growing the sport at school level (which we are doing effectively), the students are then handed on to GHOF/Family Fishing for participation and the family is then introduced to various angling clubs. Perfect: easy. No news thus far...but how easy would that be…and what’s more, growing group and strengthening family bonds. Ah well…I live in hope. 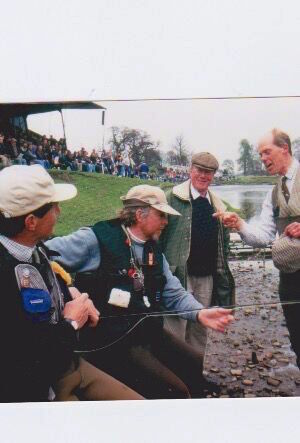 Do you think the story is true about dwindling numbers of fly anglers joining our sport, or is it in good shape?

I think it is in comparatively good shape. We have lost the influx of anglers that we had years ago on our reservoirs, but actually, when we stop and think; did we have them in any case? Back then many coarse anglers fished on lakes and reservoirs up to June and then went back to coarse fishing thereafter and on the resumption of their season. There is growth in river fishing – and I give you the interest in both grayling and pike. But the only real growth in our sport, as far as I deduce, is with carp fishing, still.

Is social media good for fishing or a vehicle for some of the not-so-good things?

I think if you were a fish that was being thrust towards a camera or phone lens and gripped for dear life, you might think not.

Pete, I think it’s OK…and I believe that it is a healthy platform for ideas and trends. I just wish people would think before their actions. A location disclosed, or place described etc. etc. is not just shared with one or two, but often as not, thousands. There comes a certain responsibility of usage. Be responsible.

That said it has brought disparate communities together and created friendships way beyond the iniquitous “friend” tag. The jury is out.

Do you think your career would have been different if there was an internet when you started in the industry?

I think so. But like phones – now micro-computers. Will we be saying the same thing years from now? Progress is just that. One learning from another, to another and so on. The irresistible power of advancement. Learn and move on – responsibly.

Would it have been harder or easier to do the things you have done with it?

I am not sure Pete; some questions are virtually unanswerable; this is one of them. I think with the advent of the computer things have altered in terms of visual construction. The world is less wordy; yet, ironically, we still buy books. People still paint, fish…nothing is all “virtual”.

Publishing has changed; so yes my world would, and has changed. Yet there is still a hunger to own and collect. As from a typing standpoint, correction fluid manufacturers must have wept, when I started finding that there were such things as spell checkers and other writing aids!

I am about to explore illustrating on iPad. Now that will be a “brave new world” for me. What about I publish the first fish orientated results on this vehicle? A test case of the question if ever there were. 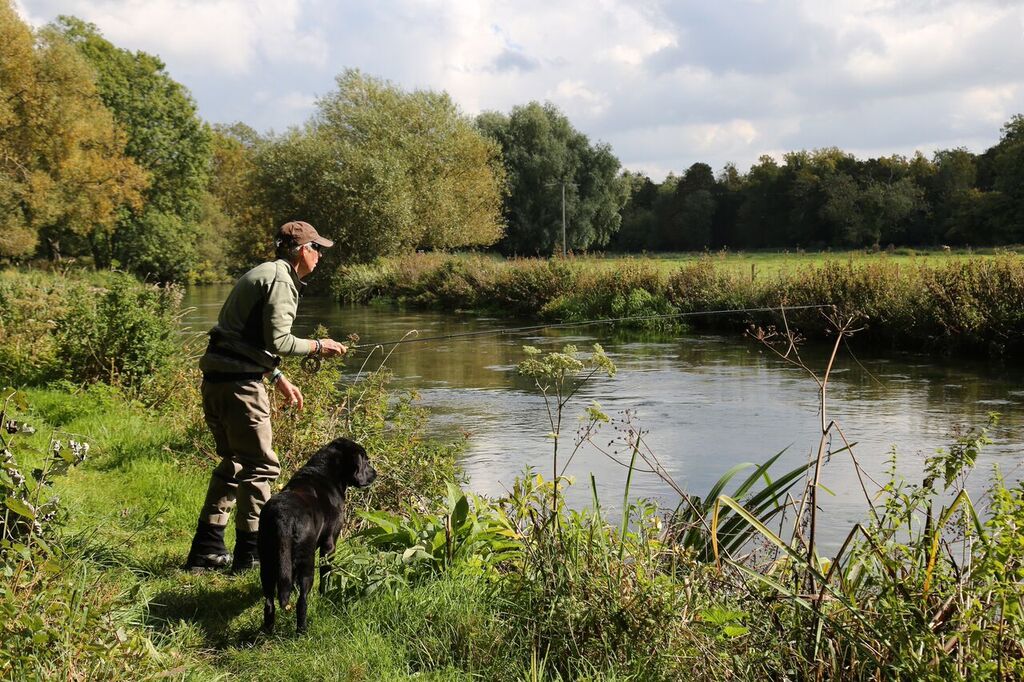 Can fly fishing tackle develop more or are we close to the peak of what can be achieved?

Whatever advance that we have now, will be incremental. I really do think that the major breakthroughs have been made. Steps will, whilst being brilliant, welcome and effective, be little strides, as opposed giant leaps. Anyway, how much lighter do we want our rods to become? Even with the advancement of line technology a taper is still fundamentally a weight forward or double taper. And many floaters still sink!

So I think we can honestly say the revolution is over, but the future is being finessed.

What is it you look for when it comes to company on the water?

What would be your Hall of Fame rod?

Is there one place you still hope to fish?