Chadd VanZanten is back with a tale about motels, dodgy beds and slow fishing. We defy you not to laugh!

Brad calls the motel around 8 p.m. to tell them we’re on the Interstate and about two hours away, but will there be someone to check us in when we arrive?

I should mention my use of the word “motel” in this case is generous. We’re heading to a cluster of frowzy cabins out back of an old roadside stopover. It doesn’t matter whether it was originally a gas station that became a gift shop or a diner that became a convenience store because it is now all of those things and the one thing it is not is a motel. 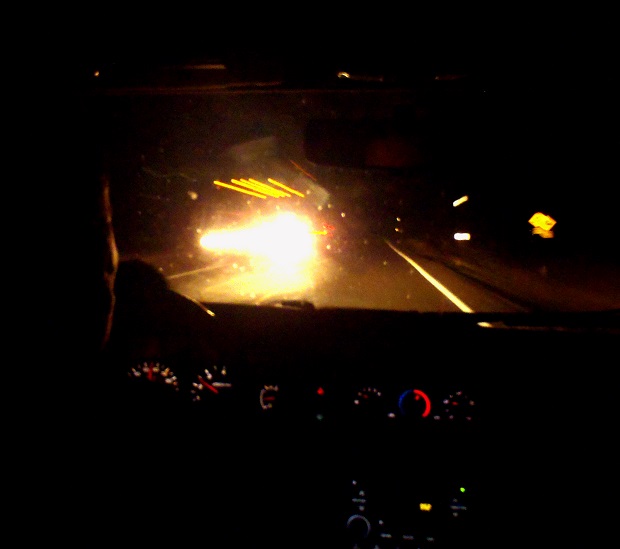 All-night check-in is just one of the many conveniences they do not boast. Air conditioning, ice, and room service are a few others, and we are surely closer to the Continental Divide than the nearest swimming pool or hot tub.

The proprietress of this establishment tells Brad the diner closes at 10 p.m. Her name is Brandy. She says if we get there before ten, someone can give us a key to our cabin. If we get there after ten, we can “go around back” and find the key under or next to something somewhere, but that seems worrisomely complicated and so Paul drives a little faster.

We exit the Interstate and pull into the gravel parking lot with about 120 seconds to spare but no more than that. Through the windows of the diner we see Brandy closing up. She wears way too much make-up and spray-on tan for someone her age, and her attempt to flirt with Russ would be awkward even if she were much younger. However, she wins us over by treating us not as paying customers but as distant and unexpected in-laws who are in need of a place to crash.

We admit that we are.

She asks if we want to pay with cash or check, and in return we ask her if she can split our bill four ways so we can each pay separately.

No one says anything for a few moments. 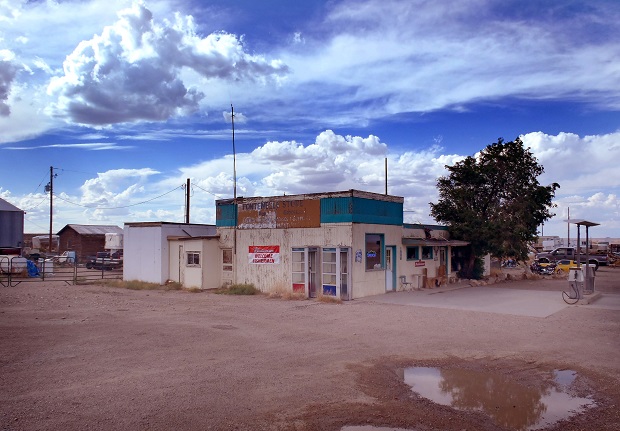 As she runs our cards we ask her how business has been. She sighs and says her best employee is out of commission because she had to go into town to bail her boyfriend out of jail.

We nod and pretend to know how tough it is when your best employee has to go into town to bail her boyfriend out of jail. Brandy shrugs it off and says everything will be fine in the morning.

“I mean, how long do you need to bail one guy out of jail, right?”

We nod some more.

Brandy shows us to our cabin, the interior of which would not be unfamiliar to anyone who has been detained in an internment camp. Once we’ve dropped our bags and rod cases, we notice the cabin has only three beds, so Brandy takes us to the cabin next door, where she keeps a couple rollaway cots that appear to have been in service since the Roosevelt Administration and I mean Teddy. She points out which is the better of the pair, and Russ helps me roll it down the boardwalk to our cabin. 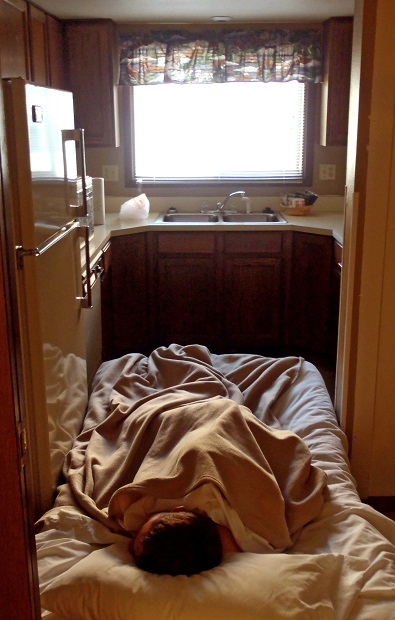 Brandy watches Russ as he pushes the rollaway. “You’re tall,” she says. “How tall are you?”

Once inside the room, I unfold the cot and there in the center of the mattress is an evil-colored stain about the diameter of a good-sized dinner plate.

Russ and I exchange a horrified glance, but Brandy is unfazed. I realize that it falls to me to be embarrassed on behalf of us all, and so I quickly flip the mattress over.

On the other side the stain is even larger.

I turn the mattress back over and say, “We’re sure this is the best one?”

“Yeah,” says Brandy. “The other one has mice living in it.”

These are the places where we end up when we decide it’s time for a fishing trip. The convenience store that sells car batteries, handmade costume jewelry, and expired Tylenol side-by-side on the same shelf. The filling station that makes the best fried chicken in the entire region, but has a restroom so foul you’d only use it in case of great emergency.

Brandy brings some bed linen. I use both sheets to double-wrap the mattress like a corpse. As soon as I lie down, I pretty much know how sore I’ll be in the morning. This mattress will hit me in my lower back and hips because it sags in the middle exactly like a hammock, and there are good reasons one does not see many hammocks in the bedrooms of western civilization.

This is one of the few advantages of very spartan travel accommodations: you at least know how much worse it can get and you’re unsurprised when it does.

We did most of our talking in the truck, so we flip off the lights and turn in without much talk. Outside in the parking lot, idling big-rigs growl ceaselessly through the night. A sodium-arc lamp on a high mast floods the cabin with ruddy electric moonlight. Clouds of big moths swarm in the glare and occasionally they land on the window, where they dance in circles and figure-eight patterns.

Next morning we’re up and in the stream before the sun gets there. We catch a few fish—I hook and lose a nice brown trout practically on my first cast. However, as the day advances, there seems to be a discrepancy: I came on this trip for the superb fishing and the fishing is not superb. My attitude deteriorates and that makes me fish poorly and that makes me catch even less. 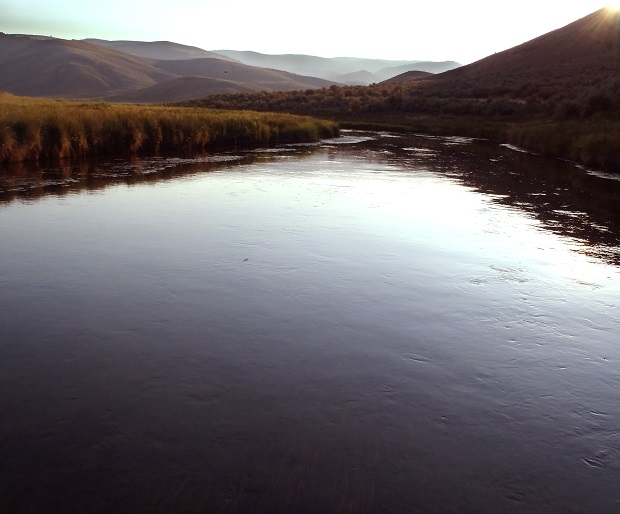 “They’re in here,” says Brad. He’s hammering away at the deeper water with his nymphs. “You know they’re in here. We just have to figure it out.”

I hate it when Brad says that because that’s what Brad says when the fishing sucks. And as soon as you tell yourself it’s not about the fish, that’s when you know the fish are exactly what it’s about. This is another place where we end up—somewhere the fishing ought to be good but is not and the river offers no explanation.

As the day grows hot, the fishing worsens, though that seems hardly possible. Russ and I fish a brushy, technical stretch of stream, breathtaking for the massive potential of its shady pocketwater and plunge pools, but we catch nothing. Brad and Paul’s afternoon is much the same, so we take a break and eat some lunch. Paul drives us around the countryside to reconnoiter various other waterways and we even stop to visit with some landowners for local intel. I fall asleep in the truck a couple times.

Evening comes and it cools off. We return to the stream and split up to re-fish various sections that performed poorly in the heat of the day. I’ve given up hope of a fifty-fish day or even a twenty-fish day. I go up the road a mile or so to a slow, deep bend in the stream where we’d caught a few nice fish that morning. 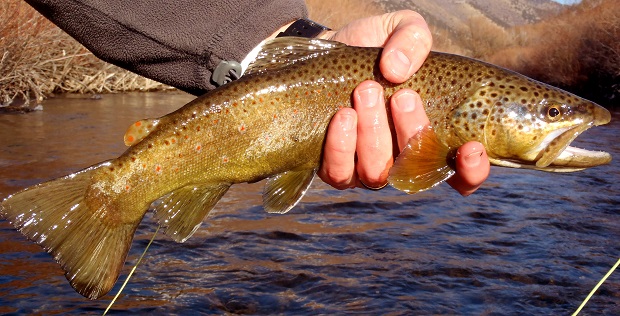 As I approach the river and the spot where I want to start, I see animals moving in the high grass at the bank. It’s a herd of twenty or more big-horn sheep. They emerge from the grass and pass within fifty feet of me before climbing a rocky hillside. It’s juveniles and ewes, with horns that don’t curl all the way around. Their orderly but slightly nervous procession reminds me of a gradeschool class during a firedrill. Sixty seconds later, they’ve climbed over the hill and out of sight.

I walk to the spot and stand there in the laid-over grass where the little herd had been resting and drinking. They’ve left behind a faint, animal odor. As I survey the water for rising fish (there are none), it occurs to me that all around me is silence, and I mean silence. No breeze or birdsong. The low-gradient stream makes no sound and there are no trucks moving along the dirt road. It stays this way for a long time. It’s a rare and utterly welcome sensation, and it’s where I wanted to end up all along.