Jeroen Schoondergang tells us about a trip he made to Sweden in search of salmon, trout, grayling and char

The countryside of northeastern Sweden is an acquired taste. Fortunately, the thousands of acres of pine trees sometimes open up to reveal wonderful rivers and crystal clear lakes. There’s silver in them there rivers and those ice age water holes can turn brightly red. Jeroen Schoondergang investigates. 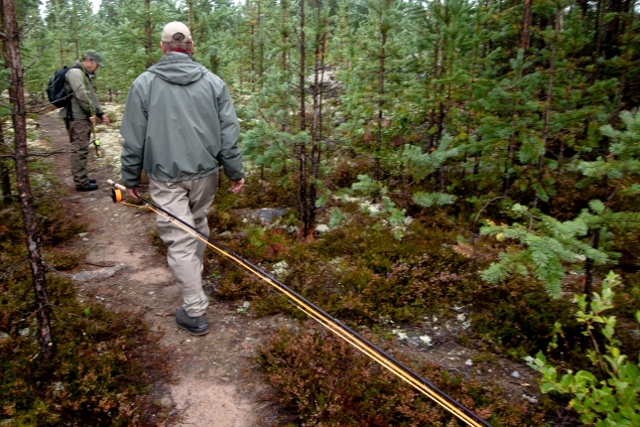 It is a Dutch guy who re-introduces me to the forests near Skellefteå, in the northeast of Sweden. Klaas-Jan Gorter has set up camp here. It is a hiding place for the ones who sold their souls to the fish-devil. The Atlantic salmon only plays ball on her terms. She is frustrating, depressing, but at the same time the most beautiful thing on earth. 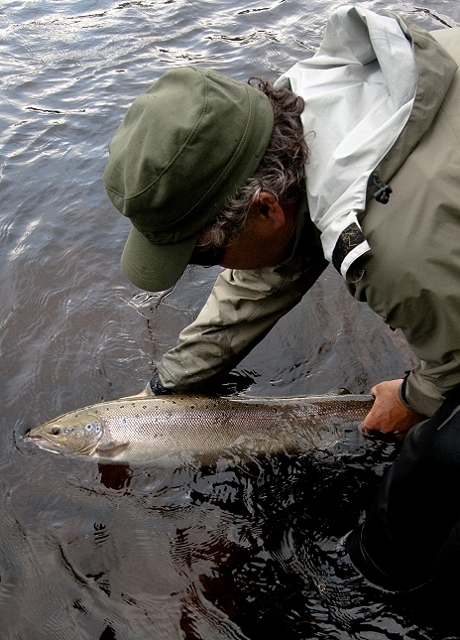 Rain falls down on the Byskeälv, one of Sweden’s best salmon rivers. Lasting showers that find a way in every nook and cranny, even in the best gore-tex rainwear available. It is just what Klaas-Jan has been hoping for. An incredibly dry summer with freakish temperatures had put fish activity on hold for a good couple of months. With rain filling the pools and getting the flow of the Byske started again, seatrout, grilse and salmon are moving. 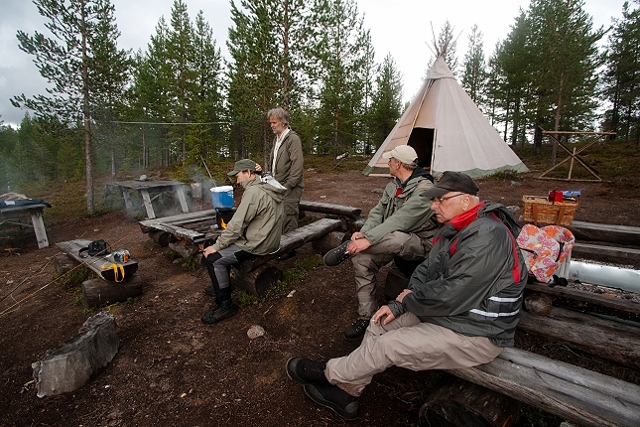 The Byskeälv is a typical Swedish freestone river. Enormous boulders are strewn in the pools. You will only get a couple of metres to wade. Pine trees all the way to the water’s edge discard even the slightest idea of a perfect backcast or even a half decent D-loop. This is Scandi-country, where fifteen footers are rigged with fat shooting heads and slick running lines. A snappy roll-cast is all it takes to get the fly on its way across the pool. 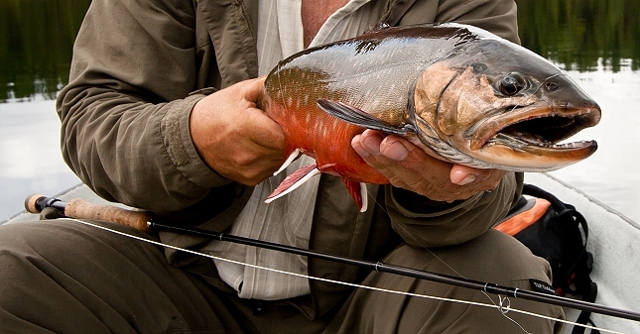 Klaas-Jan shows good form, executing his Scandi-casts to perfection. His custom built CTS fifteen footer acts as rocket launcer. Well placed casts and meticulous mending pay off. Within a couple of minutes he connects with a solid bar of (somewhat coloured) silver. A beautiful hen fish gets airborne and catapults the fly back to Klaas-Jan. 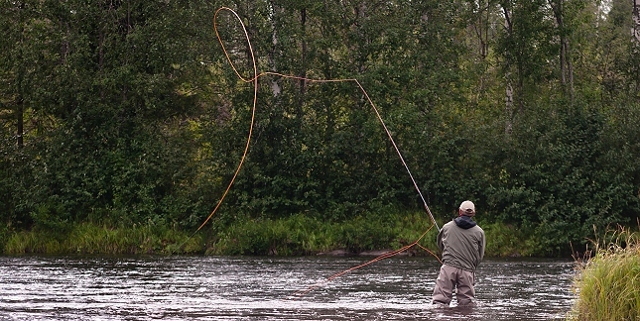 There’s no time for frustration, as many boils reveal the presence of more fish. It only takes a handful of casts for Klaas-Jan to hook another fish. Again, a good sized hen-fish and an intelligent fighter. Alas for her, she is no match for fifteen feet of New Zealand carbon fibre. It has become so wet, that it is doubtful if the salmon notices that she is lifted from the river. She is released quickly, as her sisters are still on the move.

A remarkable half hour ends with yet another epic fight with eight kilos of silver. The salmon chew up the black and red concoction, tied on a Waddington. As this fish finds her way upstream again, the late hour and dark clouds have reduced visibility to nearly nil. Time to call it a day and ponder on thirty minutes that make a salmon fisher’s year bearable again.

A short dry period between the showers can be well spent fishing on the mystical ice age lakes of Tjärnheden, only half an hour’s drive away from Culex lodge. We are guests of Sara and Sonny Holmberg who run the Abborrträsk fishing and adventure company. Star attractions are the small lakes in the Tjärnheden nature reserve. According to Martin Falklind, editor-in-chief of Sweden’s biggest fishing magazine Fiskejournalen, Tjärnheden might well be the best arctic char fishery of Europe, with specimen grayling and brown trout thrown in. I have heard reps like this before, so I restrain from premature excitement. 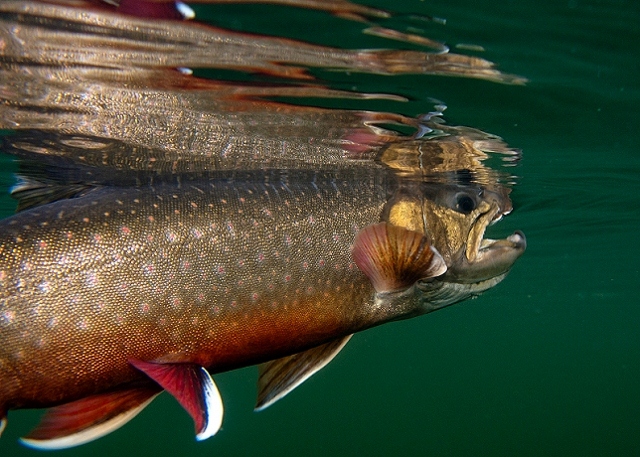 The location looks the part, that is for sure. On the shore of the main lake a lavo, a tipi as used by Sami reindeer herders, provides shelter for the fishing guests. Sonny invites me to share a boat on the lake. But not before I am drawn away to an impressive boil metres away from the camp. A brown sedge lands centimetres away from the feeding fish, resulting in a violent take by one of the lake’s good sized grayling. Fish first cast, not bad. But, let’s wait and see. It can still go any direction. 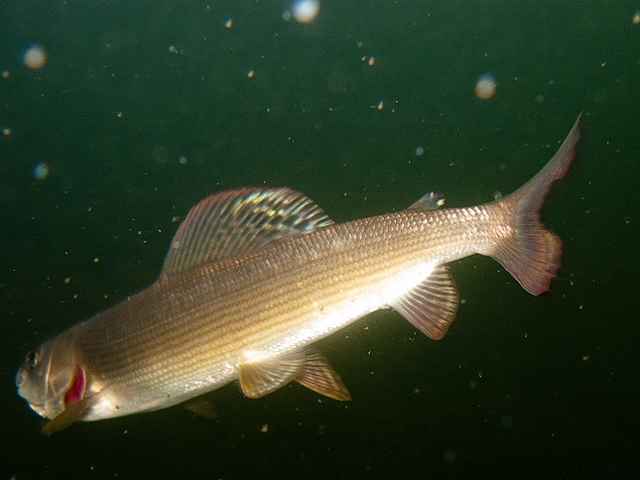 If ever a fish would be diagnosed with a theatrical personality disorder, it would no doubt be an arctic char. Underneath my deerhair sedge the water suddenly turns red. I clearly see the white chin and striped fins of the biggest arctic char I have ever seen in the flesh. The fish makes a grand appearance, hovering underneath my fly, as if he waits for everyone to focus on his performance. He then sweeps the fly from the surface in a bright red flash. I manage to set the hook, thanks only to the char’s gluttony. Within seconds all loose fly line is out there somewhere and a genuine fight is on. Sonny doesn’t seem overly impressed when I lift my prize into the boat. ‘Look, they are feeding now.’ 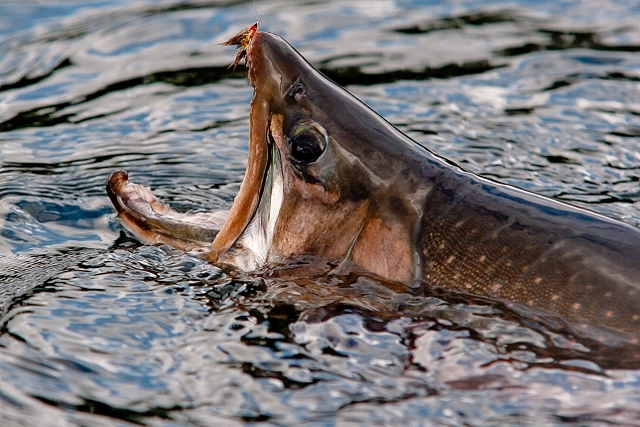 We all end our day in high spirits, having hooked dozens of char, weighing to well over 2.5 kilos. Every now and again a grayling has snatched our flies. Not really a bad thing either. 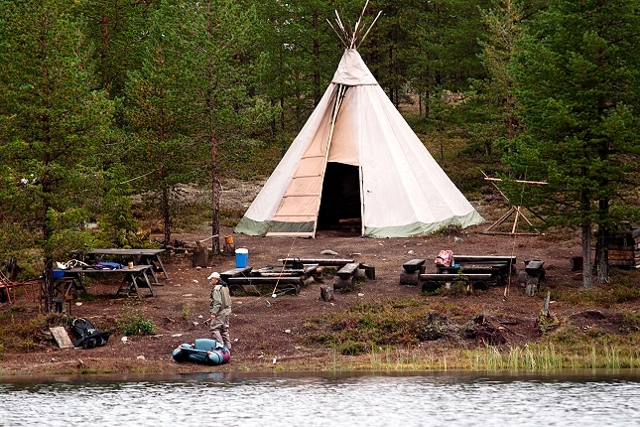 At the open fire in front of the lavo, I contemplate on Falkind’s words. I don’t know all the arctic char waters on this continent. And yet I suspect that he might not be far off.